Diabetes Makes Me Feel Like A Perpetual Boy/Girl (WHATEVER) Scout 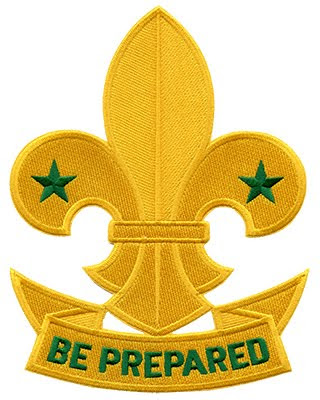 Being a PWD (person with diabetes) means that I always feel like I’m perpetually living a Boy Scout world! Which is all types of ironical because my mom wouldn't let me join Brownies in the second grade - Long story, but I was totally pissed.

No, in real life I’m not wearing the Boy/Girl (WHATEVER) Scout uniform 24 X7, or continually building fires, pitching tents (minds out of the gutter people) or helping little old ladies cross the street – though old people LOVE me and have asked me to do just that in the past. And yes, I’ve helped them with a smile on my face!

No, I feel like a Girl/Boy Scout, because living and traveling with diabetes means that I (we) ALWAYS have to BE PREPARED. And always being prepared means ALWAYS carrying/packing extra diabetes accoutrement (a fancy word for crap) in life, and especially when we’re traveling. And even when we think we're prepared, the fates love to prove us wrong! Seriously, we deserve some type of badge or medal! See above pic.

Speaking of traveling, I’m getting ready to go to Washington at the end of next week - more on that later. I’ll be away for 4 days and 3 full nights, returning back home late on the fourth day.

And as every one knows, traveling with diabetes always requires extra, EVERYTHING.

So I’ve already begun preparing my purple Amelia airheart suitcase with wheels, because I don’t feel like running around for all the diabetes stuff later on.

I've already made & begun to pack my diabetes list.

Inside my trusty suitcase, I’ve already placed a zip lock bag with 7 infusion sets & cartridges, two needles, and an extra container of 50 test strips, and 5 lancets in the big zipper compartment of my bag. Along with a pack of industrial strength Johnson & Johnson Blister Cushions (a must for those of us with sensitive tootsies – these band-aids kick blister ass), 2 extra pump batteries, and 6 lara bars/kashi bars just in case I get hungry. I’m out of raspberry glucose tabs so it’s time to hit the dollar store for a movie size box of SweetTarts.

I’ve also tossed in an empty vitamin bottle to use as a temporary Sharps container.

On my person, I’ll keep my insulin, (at least while en route) an extra infusion set in case mine rips out during the train ride/conference, another canister of test strips already in use, and 1 spare battery. I’ll also make sure to have some spare change on hand just in case I need to unscrew the cap on my pump to replace the battery. Seriously, what goods a spare pump battery if you can’t twist the lid off because you don’t have any spare change?

All that and I haven’t begun to think about my clothes/accessories! Which is just a whole other set of issues that I'll deal with next week and and a whole other post entirely!

So my friends, how do you handle traveling with diabetes and do you have any diabetesalicious tricks of the diabetes /traveling trade that you care to share ?

"an empty vitamin bottle to use as a temporary Sharps container"

And, I SO feel you on the spare change so you can get the cap off of the pump battery cover.... Even at home it drives me nuts when I have to chase down a penny or a nickle to do it because someone has removed the one that we keep in the supplies drawer for that very purpose! ~OK, rant over~

Yeah its pretty brutal that way - and doubly so with a pump it sounds like.

I always made my list, and checked it twice!

Doubles of everything - and when flying - meds in carry on - and on person.

Awww, this is adorably true! Non-diabetics don't think, "Oh, I better have glucose with me on this jog because there is a possibility I could die without it..."

I'm pretty bananas about my supplies when traveling, but I'm an OCD planner. I always take way more than needed because I think about what happens if my site doesn't stick or if 5 straight infusion sets are all bad. About 99% of the time I've never needed extra.

I think about those people that crash into a snow bank or get stranded somewhere and try to be extra prepared. I'd hate to be forced to eat someone else's pancreas just to stay alive... hmmm. Wonder if that would work.

I worry about overseas or different country traveling where I may not be able to get another pump if mine dies. That would be scary.

Kelly - that sounds familiar! People laugh when we say we check out where the hospital is before we set out on holiday, then we explain why, and they understand.
I did a blog yesterday on the theme of packing for a trip into town, let alone a holiday!
http://andrewbudd.blogspot.com/2011/03/if-were-nation-of-shopkeepers-how-come.html
And don't worry about the Brownies. Sounds like a narrow escape from joining a para-military organisation to me.

I always have a rubbermaid container with glucagon, extra lancets, alcohol wipes, ketostrips, and a bottle of test strips that just stays packed. Then I dole out my son's site change crap into individual baggies each month - just grab one and go do the set change. So I just grab 2x of the baggies as I will need on the trip - never leave home with less than 2 even if we don't plan to do a site change while gone. It is a pain. I have only left insulin at home once, because I was trying to be clever and pack in the cooler instead of with the rest of D stuff. :(

The other day someone made a comment about "all the snacks in my bag".

SERIOUSLY... do you NOT KNOW why they're there??


On another note... the temp sharps container would be GREAT for the car.

I tend to be a minimalist when it comes to traveling, actually.

On most trips of any length, I tend to bring a box of silhouettes and reservoirs (only because boxes are easier to pack) and two bottles of insulin (in case one breaks). And depending on how many days I'm gone, I usually bring 1 or 2 extra bottles of strips (not including the one in my meter). I almost never bring batteries (I can buy if for some reason my pump needs it). And when I fly, I almost never bring juice with me, but instead buy a bottle as soon as I'm on the other side of security. I just hate glucose tabs! If I go low, I'll just pick up another at the hotel gift store.

I always pack my insulin in my purse because I don't trust it down in cargo, but I usually forget to bring an extra set or reservoir in my purse. Sometimes, sometimes not. That's pretty much it. I don't use alcohol swabs, and I don't even think I own ketostix anymore... I only bring Lantus when I'm going out of the country, because it's too difficult to get a RX faxed to a local pharmacy.

Except for juice, I almost never bring snacks with me unless I know I will want to eat (like in the car or on a train). Food has always been accessible to me so I don't really see the need to be loaded down with extra stuff. I guess I'm just weird. :)

wow, you are a true metro-scout-ual!

My daughter is currently a Brownie, and my son, who has type 1, is currently a Cub Scout. I often think of the "always be prepared" slogan when it comes to diabetes. Your analogy was spot-on!

And, yes, those blister cushions rock!

Have a good trip!

Ah, the joys of traveling...

Getting ready on this end, too. Gotta write a post about that before long (not to self, which I'll likely forget about soon enough)

Sounds like you're always prepared and quite the Scout! I try my best to pack light, but not always possible. We'll see what happens. Good luck on prepping in the coming week!

The "vitamin" container is a great idea Kell. I have had some doozy travel experiences with Joe...site changes mid flight on a 300+-site-failed-stubborn 7 year old ARE.NOT.FUN.

Bring an extra glucometer. I was once in the middle of BFE and Joe's glucometer BROKE at Midnight. Yes, midnight...no, batteries did not do the "trick". It was broken. I checked for ketones. He had none...so I slapped him a couple of glucose tabs and hoped for the best. It sucked the big one.

I usually take a minimum of double what I might need as far as strips, insulin, pump supplies go. Then I take snacks, juice boxes, at least 3 tubes of glucose tabs, and a glucagon pen.