“Looks Like I Picked The Wrong Week To Stop Sniffing Glue.” 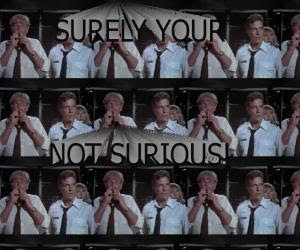 Every single time I think about (or attempt to start) basal testing, that’s the line that goes through my head- cause I'm weird like that. Sidebar: I LOVE the movie AIRPLANE!

But seriously- it looks like I picked the wrong week to start basal testing.

As of late, my numbers have been all over the place. I’ve been running low after dinner straight on towards midnight and waking up with high numbers the past 3 days.

I don’t bloody think so!

I’m getting frustrated for several reasons, all of them valid.

Today’s basal test will commence at 1pm and last until 10pm. No eating, lots of blood sugar testing, and of course, uber amounts of bitching on my end, which should make work veeerrrryyy interesting~

“We have clearance Clarence.” Proceed with the basal testing- and don't call me Shirley!

War is hell - so is basal testing…

I think all basal testing should come with doctored quotations pulled from Airplane.

Oh I love Airplane! 'You speak jive?' that cracks me up each and every time.
Yep, pull on the big girl panties and get on with it. Just think how you will feel when it's all done!
Speaking of crazy numbers, is it just G and you - cause she is running so very high these past 3 days and I can't figure it out? The weather? The endless rain?
Good luck with it Kelly! You can do it!

Outstanding! "I am serious, and don't call me Shirley."

This has made my day. It really doesn't get any better than this. Ok. Maybe. If Caddyshack or Spaceballs were in there somewhere...

To steal a quote from Airplane II: "Oh, cut the bleeding heart crap, will ya? We've all got our switches, lights, and knobs to deal with, Striker. I mean, down here there are literally hundreds and thousands of blinking, beeping, and flashing lights, blinking and beeping and flashing - they're *flashing* and they're *beeping*. I can't stand it anymore! They're *blinking* and *beeping* and *flashing*! Why doesn't somebody pull the plug!"

Why doesn't somebody pull the plug on all this diabetes "control" stuff and just cure this damn disease???!!!

I am totally with you on being unorganized.

1700 lancets? You have enough to supply the entire DOC for a generation or two!