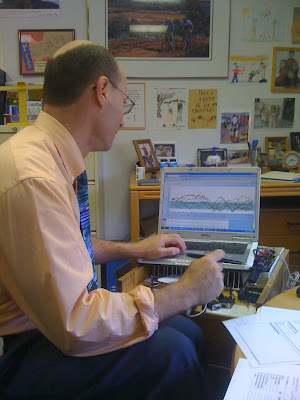 Gary and the data - research in motion~

So I walked in Gary Scheiner's office at Integrated Diabetes Services and I was nervous.

Nervous because of what we’d find, and nervous about what we wouldn’t find due to the swan dive into the commode that I referred to in yesterdays post.

And I was nervous because I hadn’t done such a great job on the basal tests and fasting, and as far as me logging my numbers- Um, not so much.

We said our hellos and got down to business. Gary downloaded the info from the Dex into his laptop and all sorts of graphs popped up on the screen. More on them later

Gary asked me several questions including the make of my pump (MiniMed 512 -I know it’s old) my current basal settings (I had 3), carb ratio (15), insulin sensitivity 50%) and target blood sugar 97.

Me: Of course it does.

Then he asked me to hand over my meter (a lovely chartreuse One Touch Ultra Mini whose time & date settings I had somehow managed to overlook) so he could down upload the info to his computer.

And that’s where we ran into a problem, because my Ultra mini was first generation (circa 2008ish and didn’t have upload capabilities that the more current ones have. He immediately replaced it with an upgraded chartreuse One Touch Ultra Mini.

Then he attempted to upload the info in my 512 and ran into the exact same problem.

Gary: Do you have any written records?

Me: No, because I thought all the info was in my meter and your Dex.

Gary: OK, let’s pick your brain and then compare it to the data.

The data resembled maps, and as you’re all well aware, I’m no Magellan.

Gary on the other hand, navigated through the graphs and charts like a champ. He noticed a few issues with a portion of the chart and had to deal with my total lack of the written record, and the fact that I almost killed the Dex.

He picked my brain about meals, lows or highs that stood out, etc.

He printed the charts and put them on the table, along with a worksheet titled: CGM Result Analysis, and began to explain to me exactly what my deal was.

I thought the low range number would be higher because I’d been having late afternoon lows and middle of the night lows as of late. But I was impressed with what he was telling me and I continued to listen.

Gary: Kelly, I’m noticing that your boluses seem to take 4 to 4.5 hours to complete working whereas many people see their bolus activity finish in 3-4 hours. Nothing to be concerned about, you just need to be patient and allow your bolus time to do its thing. And it's best to continue giving your boluses before eating to prevent the post-meal spikes.

Me: Patience when it comes to lowering high blood sugars? OH MAN! So does this indicate that something else is going on? Is this a diabetes complication?

Gary: No, that’s just how and who you are. Don’t worry about it.

Me: So it’s not a complication?

Gary; No Kelly,its just you- I swear.

Me: OK then. Gary, let’s talk about food. I’m barely hungry at all during the day- I actually have to remind myself to eat. But I’m starving at dinner and snack most of the night.

Gary: You mean you graze bolus.

Me: Well if you put it that way, yes indeed I do.

Gary: Do you eat a snack before bed?

Gary: How about committing to a snack every night at 10 with a predetermined amount of carbs- consistency is key.

Gary: You can eat whatever you want- can you live with a snack totaling 25 grams of carbs?

Let’s take your insulin sensitivity from 50 to 45 and change your target blood sugar from 97 to 110- can you live with that?

Me: Yes indeed I can live with that.

ME: OK, WOW. And in my head I was thinking “Wile E. Coyote, GENIUS!

Gary: Kel, I’d like for you to attempt basal rate testing with finger stick testing and don’t stress out about completing the whole thing. Whatever info you get helps- completed basal test or not.

Me: Gary- I psyched myself out. But I will do this - I will make it happen.

And I absolutely will, because if Gary was able to give me this amount of info without a successful basal rate test- I can’t imagine what his findings will be when I actually complete them!

Awesome!!!! Awesome awesome awesome!! And I bet the basal and carb tweaks you've already made will help your next round of basal testing to better anyway. :)

Sounds like a great visit! I swear, every time I bump into Gary (I used to see him now and then through work at Smiths Medical) I walk away very impressed with him and his smarts.

And to top it off, he comes across as such a regular guy! I love that about him.

It sounds like he's given you some great information to start with!

Looks like you got some great information. I agree that the tweaks will only make your basal testing easier. I bet you feel fantastic!

This sounds like such an amazing appointment. Thanks for sharing. It almost seems magical. I hope the changes all work!

this guy is so awesome! wow, what a great read (as always) kelly! i was confused about something in his book, think like a pancreas, so i noticed in the forward that he said "feel free to email me with questions". i did, and he wrote me back this long explanation. what an amazing human being. ;)

That's why I love the Dexcom- so much information without taking a single note! I've never done basal testing (which for the first time now has me concerned) but, being on MDI's, have no idea how I would adjust from, say, a carb ratio of 14 to 12. That would be awfully hard in 1-unit increments.