When I was little, I used to make pretend I was Wonder Woman. It's true - I kid you not.
Like many a little girl, I begged my mother to buy me a terrible gold plastic headband so I could pull it down it in front of my forehead and wear it like a crown. I'd don my Navy bathing bathing suit with the white USA lettering & shield and red Olympic rings on the front, and I'd wear my moms chunky 1970's silver bracelets on each wrist so I could deflect imaginary bullets from all directions. My sister had a macrame belt that I wore around my waist as my "Lasso of Truth."The only thing missing was some red patent leather boots, which my parents refused to buy me, no matter how much I told them that those very boots were imperative for my crime fighting skills.
I'd spin around, deflecting make pretend bullets with my mothers bracelets while singing "WONDER WOMAN."
I was also a fan of Cat Woman (both of them) on the Batman reruns. I'd wear my black leotards,black tights, & black tap shoes, and donned a black mask I bought at the Margate 5 & 10 with my allowance. I'd wrap my nails in masking tape so I'd have some "claws" and would spend hours with my friends prancing around, fighting crime, and trying to purr & meow a'la Ertha Kitt & Julie Newmar combined.
Some would have called me a strange kid, others would say I had an active imagination and a flare for the dramatic & theatrical.
But, we all grow up, and we begin fighting very real battles that life throws our way. The constant and shared battle/challenge in all of our lives is living with diabetes, which is why we write our blogs.
So imagine how thrilled I was when I saw our blogging buddy Chris Bishop's Blog Roll
and the image that was attached to Diabetesaliciousness. 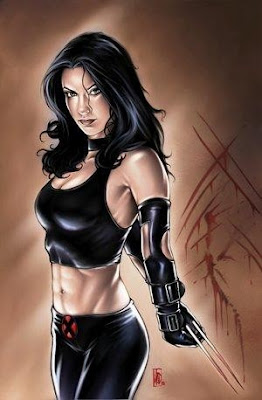 Image courtesy at Type1tidbits & DeviantArt
Diabetesalicious Super Shero Kelly/k2
Alias: Pascale
I added the following:
Nick Name: Diabetesalicious Wolverina
Weapons/Accessories of choice: Insulin Pump, glocometer, Lancome Prune Drama Girl lipstick, 50 sunscreen, Sweetarts, a sardonic wit, & a booming Diabetes Voice.
Fights the good fight, busting diabetes myths while battling the Diabetes Police @ every turn. All while trying to maintain Blood Sugar Nirvana and a sassy attitude~
I asked Chris to tell me a bit about the comic book art & aesthetics inspiration for his blog, Type1tidbits :
Chris Bishop: Its a labor of love. I've always been a big comic book fan especially when I was younger and also have been an artist / designer. I came up with the entire comic book style blog because I wanted something a little different but also wanted to incorporate my artistic side to my Diabetes blog. So like I do when I am brainstorming for a design I'm working on. I went to deviantart.com and google images to get inspiration. That is when I started stumbling on comic artists and their work. I thought it was the perfect idea for my blog. I wish I could say that the art was mine but its not. I can draw and am decent, but these artists are on another level.
I use my design eye to incorporate it into my blog. For my posts, I get a topic, then think of a catchy title for it. Then the work begins. Then I go through my large collection of comic images to find one that represents the title. If I can't find anything I like, then I go to sites like deviantart.com or google images and doing keyword searches until I find something that fits. Once I find one that fits. I use the comic book character that's in that image and take other images of that character and create a custom header for my blog based on the character. It keep the blog interesting and hopefully make people want to come back to see more.
As far as the blogroll is concerned. I just decided I wanted to create a blogroll and keep with the theme. So I started with the blogs and the individuals who write them. I find a picture of them and then use my knowledge (plus some help from deviantart.com and google images) of comics to find a character that looks visually similar and use it for their image.
I'm honored to join a long list of Other Diabetes Super Sheroes & Heroes on Chris's blogroll. All of us fighting for Diabetes Truths, busting diabetes myths, perpetuating diabetes justices, and yes, looking smokin hot in the process!
You need to stop by type1tidbits if you haven't already, IT'S GREAT!
Now, if you'll excuse me, I'm off to do about 7000 crunches, cause girlfriend needs to be donning her Diabetes Super Shero fighting leathers very soon ~
And Girlfriend definitely needs to stop using the words "don, donned, or donning~"
Posted by k2 at 9:41 AM

I love it! :) I was never into comic books or super heros...but I think I could love them now! Chris did such a fantastic job on everyone. :)

I'm glad you liked my choice for you. I think it fits. Also thanks for pluging my blog. I feel this will be an ongoing project which I look forward to.

This is pretty fantastic... Awesome. Thanks for spreading the great work from Chris. Now, go off and tend to your crime-fighting mission!

so cool. I was shocked when he chose Wolverine for my blog! I was honored.

Then I wanted to cut something with the cool claws sticking out of my hands! RAWR!

I though Chris's choice was perfect for you, just knowing you a little from reading your blog and getting the vibe of your attitude.
I agree, Chris has a very cool thing going over on his blog, it's nice to bring some art, fantasy, and fun into this thing we battle and play with every day.

Awesome post, and awesome blogroll, Chris! You've made us all look like we're ready to conquer the world. :D

I LOVE it! It is so you. Bravo Chris!

I cannot say enough about how much I love Chris' blogroll! It's so much fun!! He did such a great job of matching up pics and I thought yours was a particularly nice match. And dang, do I wish I looked more like the one he picked for me.

Kelly,
Looking forard to read about this super heroine on the Marvel Comic app on my iPad. :)

Perusing Chris's blogroll has been the highlight of my week!!! He did such a terrific job assigning super-heros to bloggers. (Thank you Chris!!) I love that I'm Zantanna - just wish my real-life height and weight matched hers. LOL

Awesome picture! Chris is a excellent artist and has a great thumb for things. His blogroll is amazing.