Gluco-Tubular: A Study in Stubbornness & Laughter

So I was on my way to be a guest on DiabetesLivingToday.com radio program when I hit a major traffic 3 miles from the studio. Apparently a car accident had occurred at a major intersection & every single car in either direction came to a grinding halt.

So there I sat, listening to a mixed CD and wondering when I could put my foot on the gas instead of the break. All of a sudden, I felt that old familiar feeling. You know the one, when there's a tingling in your stomach that moves through your body- sometimes slowly, other times at lightening speed. I was going low and grabbed my meter, tested and was 92.

Not really low, but I knew I was heading south as opposed to staying put - at least as far as my blood sugar was concerned. I had food in the car, and CVS Raspberry flavored glucotabs in my console. I made an executive decision and reached for my trusty roll of glucose tabs.

I quickly downed 4 and was contemplating popping another. I decided to go for it because I'd rather play it safe than be sorry. Plus, it was the last tab in the glucotube, so why not finish the whole thing?

So I shook the tube.... and nothing happened. I looked to make sure that there was indeed a glucotab at the bottom of the tube- and yes indeed there was.

So a shook it again, and nothing happened.

And then I "shook it like a Polaroid picture" and banged the tube on the side of my car door and I’m sure I looked like a crazy woman to the other drivers trapped in traffic.

And then I started laughing. The kind of laughing where it's deep from your gut and louder than the noise around you, deep belly laughs, that eventually lose their ability to make sound and leave your shaking and looking like some freak devil, mime incarnate.

And then I took a picture, so I could share it with all of you! 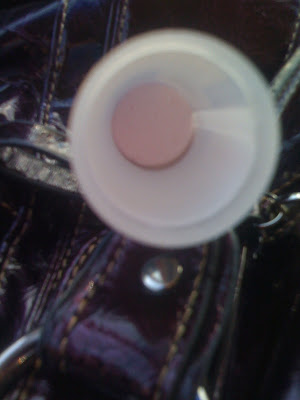 Gluco-Tubular: A Study in Stubbornness & Laughter -
Taken with my iphone
Once I stopped laughing and found what was left of my composure, traffic started moving again and I made it to the show on time. My blood sugar behaved and a good time was had by all~ The podcast should be up on Diabeteslivingtoday.com soon!
Posted by k2 at 11:01 AM

You left us hanging...Did you make it to the interview on time, if so is there a link for a podcast or recording of it?

"deep belly laughs, that eventually lose their ability to make sound and leave your shaking and looking like some freak devil, mime incarnate."

That is hilarious!! I love those kinds of laughs, and I think its even funnier that you were by yourself and had one!

I am laughing right along with you. I can't wait to hear the podcast.

So the tab was stuck in the tube? That is crazy! I can totally picture you freaking out in the car and laughing like crazy!