Today's post is brought to you by Penny, from a Sweet Grace Blog. Penny and I started communicating when she began commenting on the blog. Then one day, I received a beautiful and heart-felt email from her requesting my address. A few days later, I received a lovely card and picture of her daughter Grace (and yes, both parent guest bloggers have a daughters named Grace - It's kismet!) The card was both a "Thank-you for writing" and a "Diaversary" card celebrating Grace's first "Diaversary." It's one of the best gifts I've ever received.

Penny's voice as a blogger is strong one. If you haven't read her blog, "A Sweet Grace," you need to!

Thanks for guest blogging for me today Penny - I appreciate it so much! 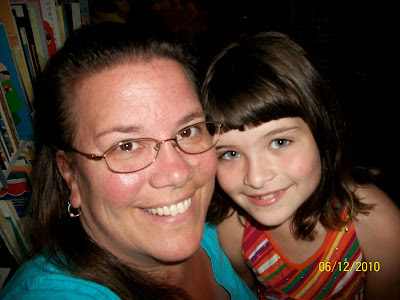 Penny & her gift of Grace~

I remember watching her be born. I asked that the drapes be lowered during this final c-section so that I could see my third child come into the world. She was pink, big, messy, howled like a banshee and she was all ours. We named her Grace. I didn’t know then, but I think I do now, how very fitting that name would come to be.

Grace was diagnosed Type 1 in January 2009 at the age of 6. The story resembles other stories I am sure you have heard - the thirst, the urinating, the hunger. Yes, the same, same, same. Five days in the hospital and I left knowing more than I ever wanted to about diabetes. Can I tell you that I was scared out of my life? I was. Much the same as when a new parent leaves the hospital thinking ‘They let me leave here with her! I don’t know what to do!!!’ - I thought the same thing as I left with Grace that January day.

What I didn’t know, and what most parents don’t know when they leave the hospital with that tiny bundle, is how much a parent learns and grows, and how much parenting itself changes their very soul. It is the same. I left the hospital after the diagnosis and the changes began. I became a parent for the second time to Grace, in a much more profound way.

Caring for a child with diabetes becomes what I do with most of my day now and part of who I am. It defines us D Moms and Dads in ways we cannot even fathom. I belong to a tightknit bunch of D-Ms and D-Ds and in them I have found my soul. With them, there is acceptance and understanding that surpasses all measure. I get the dark jokes we tell each other. I know the fear, all too well. I know the 3:00 am thoughts. I cheer on the perfect numbers. I puzzle over the unexplained. I commiserate with Moms who feels their children’s highs, and worry about the lows. I question. I answer. I cry and I rejoice. I also transcend to a higher level. I learn grace. I learn about accepting both the darkness and the light.

This journey with diabetes has placed a sense of grace at my side, with Grace at my side. It has changed me to my very core. I have found that there are gifts in this diabetes, for her and for me.

Email ThisBlogThis!Share to TwitterShare to FacebookShare to Pinterest
Labels: Parents of CWD

What a gorgeous child -- and what a lovely post.

What a beautiful post! Penny, you have such a wonderful way with words!

Great post Penny. I am in constant awe of all you magical "D" parents!

Beautiful in every sense of the word!
Thanks for sharing, and thanks for being a Guest host on my blog!
HUGS
Kelly K