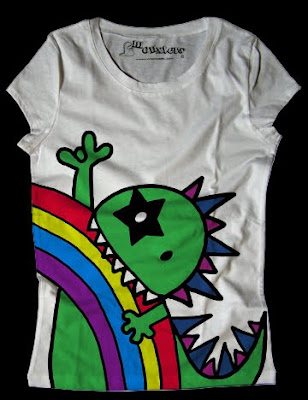 Much like the monxter dude above, I ate the rainbow on my plate & it was delicious!
photo courtesy of monxters.com

So I was at a friend’s bbq a few weeks ago, and before the official meat feast began, I was enjoying the crudites, otherwise known as the veggie & dip platters.

I’ve been trying to up my veggie servings as of late, and let’s face it, the veggie trays at the bbq made it more than easy to do that.


My plate looked like a veggie rainbow, filled with raw yellow and orange sweet peppers, cucumbers, grape tomatoes, sugar-snap peas, celery, and baby carrots all nicely arranged.
And I had a feeling that my CDEs would be pleased!

I scooped a few spoonfuls of hummus & tzatziki on my plate and was just about to grab a seat and indulge, when a Friend Of A Friend (who shall now be referred to as FOAF for the rest of the post) came up to me and said:

FOAF: Hey, don’t you have diabetes?
Me: Yes, I do.
FOAF: Well, then why are you eating carrots?
Me: Because I LIKE carrots, that's why. Why are YOU eating carrots?
FOAF: Well, I’m allowed to eat carrots. You do know they're loaded with sugar, right?
Me: I’m going to go out on a limb here and fill you in on a few things.
A. I count carbs, not sugar grams. B. Whatever sugar i.e carbs these carrots may have, the fiber, vitamins & tasty deliciousness are worth it. And C. I REALLY LIKE RAW BABY CARROTS.

FOAF: Well, I just wanted to make sure THAT you knew about the carrots. After all, I’d hate for you to run into a problem.

Me: Thanks, but I got it covered.

FOAF walked away, looking perplexed and annoyed. FOAF also spent the next few hours looking over at my plate every now and then, but tried to look like she wasn’t.

And FOAF damn near had a conniption when I placed homemade brownie on my plate!

But I ignored FOAF for the rest of the bbq and I thoroughly enjoyed my raw veggies, my bun-less turkey cheeseburger & homemade brownie.

I hung out with my friends and totally ignored the FOAF elephant in the room.
I just didn’t feel like defending myself over freaking carrots!

Nor did I feel like verbally annihilating her and carving her a new one so to speak. And I didn't I flip my Diabetes Bitch Switch (Yes, SHOCKING,I know) I just let it go.

WHOOOO would ever think to bring up a carrot's sugar?? Wh-wh-what??

Yeah, you did! WHOOOOOEEEEEEEE girlfriend! Nicely played. What a FOAF--that's just ridiculous. (p.s. I may now be using the term FOAF for anything really stupid, in honor of your story. Not that friends of friends are stupid. But I love the sound of the word. It hits just the right tone.) xoxo

funny, when i first read carrots, i thought the convo would have went more like..."carrots are good for your eyes and diabetes is not - so, eat lots of them!"

also, i'm reading FOAF as a work and not F.O.A.F. sounds like "Loaf". correct?

You were incredibly nice to FOAF, I would have said F.U.C.K.U. to her so fast her head would have spun around 360 degrees. Unsolicited advice from individuals who frequently have less training in the subject of nutrition than PWDs is never welcome, and unsolicited advice from people with some training is also not appropriate, as they are paid for advice in the office, not outside. Maybe I'm just getting old and sick of trying to change the ignorant masses, but the food police are useless and contrary to what some claim, they don't always care about the person they are offering advice to, sometimes they just want to hear themselves speak!

You were so polite! FOAF indeed. I can think of a few more acronyms for her. I can't stand the d-police as I encounter them more and more. I am perfecting my dagger eyes in preparation for the summer picnic season, in which we will engage in more than 1 'yes, she is Type 1 and yes she can have the damn cookie!' exchange. It already tires me.
Now, go ahead and eat your carrots dear Kel!

BUT, were they rainbows farted by unicorns? Because then they're carb free.

I'm impressed with how you handled the situation. People irritate me.

My first thought when reading this post was, "OMG, I really want that shirt. Is it ok that I'm an adult and would love to wear that shirt?"

Second, the carrot comments from the FOAF remind me of an encounter with a fellow D who was not so versed in science. This fellow D has had diabetes for more than 45 years, maybe 50, but didn't think that carbohydrates and sugar were the same thing.

You are one poised lady. I would have made a snarky comment if she kept glancing at my plate.....

OK D-0C...You did it to an old grandma again ...I figure it's "R" rated...but can you give me a little hint on what FOAF is abv. for? Cuz I really need a name for all those stupid people comments and I would I would like to know what I'm callin them!! Just sayin!

UGH! First of all, congrats on not bitch slappin the FOAF! Secondly, making an issue out of carrots? Seriously? Thirdly, I love, love, love that you had a brownie...would have been better if you had eaten it right in front of her, though! (Can you tell I'm in a mood today?!?) Fourthly, ROCKIN BGs girl! Way to go!
OK, done counting now!! ;)

oh god what an idiot. Well done you for staying calm and stating the facts clearly. Hopefully she bloody learnt something, but she should also learn to mind her own business!

Omg Kelly...how in the world have you survived the last 30 or so years without this diabetes "expert" to monitor what you are eating???? Perhaps you should contact her and ask if you can start submitting your personal meal plans for her approval... Wouldn't want you to consume something that might give you a "problem"! ;-)

TYhe word "conniption" gets me every time haha. Seriously people need to mind their business. I understand people worry but at least do the research first before trying to get educate someone on something you obviously know nothing about. Hats off to you for keeping a cool head.

I think you should mail that person some brownies and carrots. Mark the sender as "FOAF who loves sugar".

WOAH! Good thing that wasn't something really crazy, like... corn! She might have tackled you and taken it away.

People are so dumb :) Good for you for ignoring her and enjoying yourself.

H-E-Double Hockey Sticks Yes! Want me to 'do something' about that FOAF for ya?