No D - Day: So Did You Know Philadelphia Is Known As The City of Murals?

So I'm sure everyone has knows that Philadelphia is called The CIty of Brotherly Love, but did you also know that it's also known as The City of Murals??
Yep, true story.

It all started back in 1984, when Philly's then Mayor Wilson Goode hired Muralist Jane Golden to work with the Philadelphia Anti Graffiti Network - Hoping she could reach out the to 'graffiti writers' and have them use their talents to help create murals.
Jane not only reached out to them, she took the time to get to them and to become their friends.
And Jane saw their tremendous artistic talent of the graffiti writers/artists and (and I'm quoting directly from the Mural Arts website,)

'recognized the amazing creative force they represented, and she began to provide opportunities for them to channel their creative talent into mural-making. Mural painting also provided a support structure for these young men and women to refine their artistic skills, empowering them to take an active role in beautifying their own neighborhoods.'

Jane had and has a simple mantra: Art Saves Lives.

And Jane saw art do just that as her program changed the lives of the artists that created the art, and those living in the many city neighborhoods in which the murals were created and permanently displayed in.

Cut to 1996 when then Mayor Ed Rendell reformatted The Philadelphia Anti Graffiti Network and turned it into the Mural Arts Program - A city wide public arts program that has inspired millions and garnered national attention.
That same year and through all sorts of serendipity, Jane created the Philadelphia Mural Arts Advocates non profit,  and together both programs changed Philadelphia's canvas for the better.

The Mural Arts Program annually provides about 1,800 young people throughout the city with free art and education programs.
Lives are changed forever in Philadelphia neighborhoods through art, education and beautification - Yep, awe inspiring and awesome!

The murals themselves run the gambit as far as subject matters are concerned.
Everything including, but not are not limited to: History (Phildelphia, US, World,) the culturally diversity that is the United States, causes (yes, there's a disease that will not be named because of No D-Day, mural in the City of Brotherly Love - 3 blocks from my old Fishtown stomping grounds,) and individuals - Like Philly sons Mario Lanza and Larry Fine.

Philly's murals will stop you in your tracks and take your breath away - And that's exactly what happened to me when I came across the following mural at 13 & Locust a few weeks ago.
Thank God I had my iPad in my handbag &  was able to get the following shot up close. 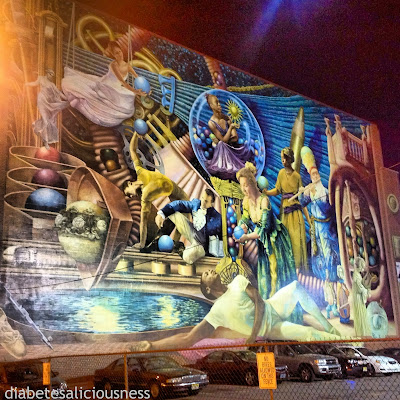 Yep, it took my breath away!

So the next time you're Philly bound, be sure to look around and appreciate the art (and the people who created it) that surrounds you!
Also, if you want to take a walking tour of the murals, click HERE and find out
Posted by k2 at 6:12 PM

Email ThisBlogThis!Share to TwitterShare to FacebookShare to Pinterest
Labels: No DDAY

I did not know that! Very cool. Thanks for the No D Day post Kelly. <3 you heaps!