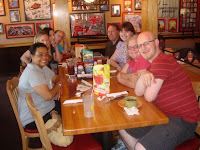 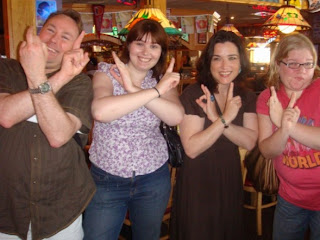 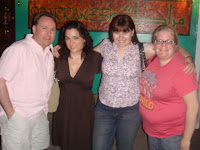 A Diabetes “meeting of the minds” took place on June 21st, 2008 at the Applebee’s on City Line Ave in Philadelphia. It’s safe to say that Philadelphia will never be the same!!

The lemonade Tour, organized by Alison, hit Philly in a big way. Hannah, Scott, and I brought along a few t3’s for good measure and the fabulous Betty Jackson and Gary Schiener rounded out our group.

I have to say, all in attendance had a wonderful time. To actually meet a few dBlogville citizens face to face was awesome, dare I say...spectacular? Screw it! IT WAS KICK ASS!
We talked (some might say bitched) about the Big D, and laughed loud, and often with a group who “got it!”

I brought along my good friend Emily. Emily recently gave up the Law and is now studying nursing. Being at a table chock full of t1’s quite the education for her…. Imagine, a group of t1’s bitching and blousing at the Applebee’s. Lessons (i.e. shit) like that can’t be taught in a textbook!

After a lunch, which included Applebee’s Shooters for dessert. We said our goodbyes to Betty, Emily, and Gary, and Hannah and Allison followed me back to Philly.

Then we went to South Street for some shopping and met up with Scott & Joe for some dinner at Marrakech.

The company: THE BEST

We had a blast!

We walked back to my house ( and tried to walk off our Food Baby Bellies) and then Allison and I drove Hannah back to Ardmore so she could Rock and Roll with her husband, who was recording tracks at very hard to find music studio. Still, we dropped off our precious Dorkabetic to her T3.

By the time Allison and I returned to Philly it was well past 1 a.m.

We slept in late, grabbed breakfast (which neither of us could eat) and then headed off to Independence Hall. Tickets were sold out, but at the last minute, a Tour from Oregon offered us 2 extras. It was truly kismet. FYI: Independence Hall is much smaller inside than out, but gorgeous just the same!

After that, Alison hit the road and went back to Jersey. As for me, I took a much needed nap!

The weekend was truly "diabetesalicious!"

A special thanks goes out to Scott for emailing the group Photo's ASAP! THANKS!!!
Posted by k2 at 4:51 PM

Email ThisBlogThis!Share to TwitterShare to FacebookShare to Pinterest
Labels: Diabetes has given me some great positives, diabetesaliciousness

Sounds like so much fun!!!! Good for you. :) I don't think I've ever shared a meal with another Type 1. Kinda sad, huh? I bet it felt good to sit down to a meal with a table full of people who really GET IT.

Hey, Kelly! I saw this over on Hannah's site earlier today. What a blast you guys must've had. I mean, how cool would it be to have a meal with a whole crew who could actually figure out my bolus for me in a pinch? Awesome.

man! so much fun! how exciting for you guys! i'm a little jealous haha. glad you had a great time.

Karen -
IT was great to see and meet everyone face to face! Come to Philly and share a meal with me - breaking bread with other T1's is fantastic~

Colleen -
It was truly awesome!!

Jeff:
We all did the bolus thing and nobody played "Blood Sugar Police."
We had a blast!
k2

Applebees restaurants probably put out an emergency management memo warning other franchises to be on the lookout for roving bands of T1s in their neighborhoods!!

sorry I missed it. looked like a great time.

Naomi -
The staff @ Applebees were certainly on D-alert that day!

Carey -
You and Charlie were missed!
k2

Um, maybe it's just me, but it totally looks like Scott S. is flipping off the camera....??

Now we know how he REALLY feels! LOL!!!!

Ah! I'm so jealous! I've still not met anyone from the OC yet! Someday I say! I live so far off in the middle of nowhere (a.k.a. Tennessee) that I don't get to see many people.
You look like you guys had a blast.

Scotty J -
Yeah - Scotty S was telling it like it is!

Cara - We did have a blast! I always wanted to go to Tennessee, who knows, one of these days we might be breaking bread at your local Applebee's! Though, if u know a good BBQ joint, I'm up for that!
k2

Cool. And giving up law for nursing, please thank her for me.