World Diabetes Day is “officially” over, but not for anyone with or affected by Diabetes.

Diabetes is a never-ending fact of life in our world. Now, we have to continue to inform, educate, and continue the fight to find a cure!

This World Diabetes Day was a bit complicated for me. I had planned to meet Hannah and LeeAnn on World Diabetes Day In Philadelphia. My job was to assist Hannah in manning her booth (which was all about YOU- The Diabetes On-line community) but the area I grew up in was recovering from a N’Easter called Ida, and her damage was massive – especially in the state where I hail from, New Jersey.

I was in South Jersey during the storm and we lost power 6 times, roads flooded and are still out, shutters blew off my mom’s house, and the beach in some parts suffered severe erosion. Atlantic and Ocean counties lost miles of beach. Ida was ferocity was intense! The Governor of New Jersey has declared a Coastal Emergency – which may ease the cost of the damage-, which is in the tens of millions was out in the storm & have posted some pics of spots near and dear to my heart that suffered. 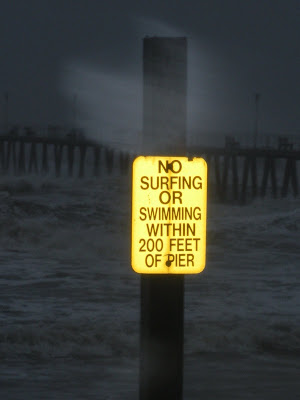 Normally this sign is in on the beach in front of the water- not in it. 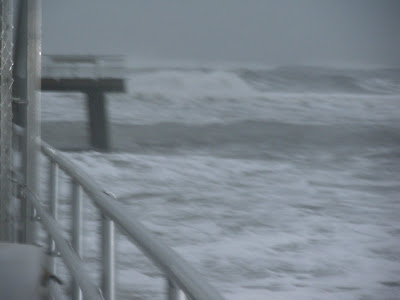 Ventnor City Fishing Pier on Cambridge Ave Beach. Normally you see a beach and the ocean~ 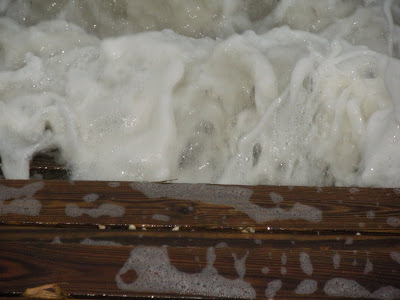 This is the step that meets the sand on Cornwall Ave beach...usually. 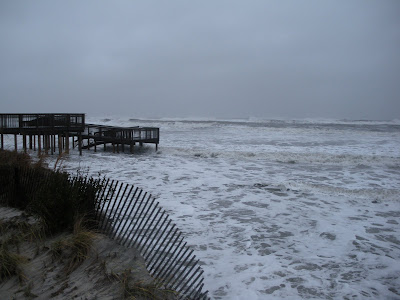 This is the beach at New Haven Ave in Ventnor, NJ. The Pier looking structure is actually a wheel chair ramp for the beach. Both suffered major damage

Saturday morning was spent assessing the damage to my mom’s property. I jumped in the car and made it to Philly by 12:45. By that time I’d missed the rush, but I did come baring blue cupcakes (from a food table) and tried to help anyway I could.

I handed out Hannah’s leaflets-, which were outstanding! Hannah wrote and collated multi-colored leaflets all about Diabetes bloggers, Diabetes social Networking sites 9and their handouts) and had laptops with the screens featuring anything and everything regarding the Diabetes ON-line Community!

I also participated in some Diabetes Art Therapy with LeeAnn – which was incredibly fun and therapeutic. Lee Ann had a dizzying array of Blue Circles, markers, papers, etc! It was a great day. Hannah & Lee Ann did the DOC proud!

National Diabetes month marches on and tomorrow I’ll be speaking about life with diabetes at a Community Outreach Program in South Jersey. I’m excited and looking forward to it! My goal is to bust some diabetes myths, teach a few realities, have the group bust a gut, and turn folks on to owning their diabetes! I’ll keep you posted on how it turns out!

This month I also was given a wonderful opportunity to be a Guest Blocker (OK- I need coffee - or at least a nap!) I mean Guest Blogger over at HealthCentral.com . I wrote about Diabetes Choices and by choices, I mean attitude- and by attitude I mean a good and the not so good! Click HERE and take a look!

Wow, I had no idea Jersey was hit so hard by Ida!!! I'm so sorry to hear that. I'm glad you were finally able to make it to Philly for WDD though. I bet it rocked!! Going over to read your guest post now.

Wow Kelly. Those pictures. Heart wrenching. SO glad you're mom is ok though and you.

Awesome you were able to help Hannah and Lee Ann. Good stuff.

I'm glad you made it even though you didn't get there as early as you had hoped! It was great to hang out with you & Hannah, do a little artwork, and eat mini-cupcakes :)

Getting to see my Philly D Girls was definitely the highlight of WDD!

Wow, what a path of damage the storm left. Amazing. I'm glad that you and your loved ones weren't hurt or anything like that.

I bet helping Lee Ann & Hannah was still a blast. I wish I could have been there.

And I loved your guest post over at HealthCentral!