The Lessons I Learned From Snowmageddon 2010

You can never have too much bread, eggs,cheese, and vanilla flavored Silk Soy Milk in the house. Same goes for red wine.

It’s not the best idea to by a giant bag of UTZ Potato Chips on Sale at the Rite Aid just because they’re having a sale on them – 2giant bags for $4, or 1 giant bag for $2.

Forget the fact that potato chips and me broke up long ago. I bought a bag and opened them up the second I got in the car!

When your snowed in you eat, like a lot more than you should, for several reasons.

Ironically the whole shoveling snow phenomenon allows you to dip into that giant bag of UTZ Potato chips many times without causing massive increases in blood sugars. I guess that whole exercise helps to lower your blood sugar thing really does work!

During Snowmageddon 2010 local weather folks/newscasters were popping their corks at every turn because this was their chance to take over the airwaves ALL DAY, for hours, and hours, and hours.

Ironical I know, but local weather folk in Philly actually cause more traffic headaches because they parked their big humungous news vans in the middle of the road and would constantly run out into traffic to interview people stuck in their cars or the one idiot who decided it was just a super terrific idea to wear surf shorts in a snowstorm.

Never lock your car doors during a blizzard, unless your absolutely, 100% positive you have a can of Lock De-Icer.

Snowmageddon had me so concerned about losing power that I actually tweeted about what to do with the $1000 bucks of unopened insulin in my fridge if the power did indeed go out. The term CHILL OUT took on a whole new meaning~

Hot chocolate is very tasty in the cold snowy weather and is not super high in carbs. Especially the Starbucks canister of Mocha Powder I bought the day after Christmas for 50% off. Only 8 grams of carbs per Tablespoon and 0.5 grams of fat, and tastes fantastic!

When one is in Florida during the first part of the Snowmageddon and was FORCED to change one’s flight to return a day later (late Sunday night) than originally planned (late Saturday night,) even though she knew that another storm was arriving on Tuesday night, said person should have just stayed in Florida until Thursday or Friday and skipped Snowmageddon 2010 all together! 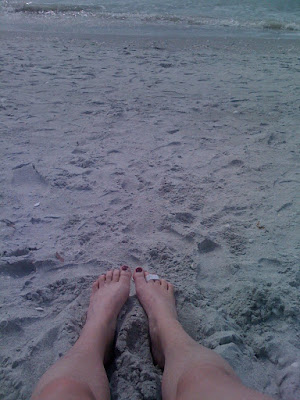 Where I should have stayed put during Snowmageddon 2010

I'd rather be in Flordia than Missouri and we only got about 1.5 inches of snow this time around.

Well, I don't have nearly the snow that you guys have up there. However, we've gotten more snow this winter than I think we have in the past 4 or 5 years put together. It's crazy. We just got another 4 or so inches yesterday. Weekend before last we had 6 or so inches. And it's snowed off and on in the in between. Sigh.
But, it did teach me that drive-thru is a bad idea...cause your power windows won't roll down causing you to have to open your car door and freeze to death to order and get your food.

There is no snow here this season. Just cold- so I only have Coldageddon advice: keep your pump tucked inside your jacket so it can be nice and warm... (at least if it's Animas.) Mine decides to lose its prime when going from the cold outside to the warm inside. Apparently it is a common enough problem that customer support knows about it... The obvious annoyance is that if you don't realize it's lost its prime then you don't get insulin and your blood sugars have a field day. Yes: field. day. I've started the practice of checking my pump when I get in from the outdoors, just in case. I love my pump/kin, but it's one annoyance I could do without.

Glad you were able to learn some things.....

Chips are the devil. Seriously, I simply can't buy Doritos anymore. The SB commercials almost made me drive to a store and get some ASAP.

Since being snowed in, my wife has become addicted to the Williams Sonoma Hot Cocoa I got her.

Here in Mass. we learned that EVERY meteorologist can be wrong! We weren't supposed to get the snow you got, Kelly, but were predicted about 6 inches. What'd we get? A dusting!

I also learned that G's meter for for Animas Ping doesn't work in extreme cold. Tried to check her bg while sledding in 20 degrees and it wouldn't work. Couldn't even get it to turn on. Once it warmed up it was fine.

Hang in there... spring is coming!

I love UTZ potato chips! We couldn't get them here in NH for years so we'd stock up anytime we found some.
Yeah, Florida sounds nice.

I would rather be in FL but if you were in Florida you wouldn't be able to eat UTZ Chips or write this fabo blog post. I am looking forwarded to moving to Indy but you blog reminded me how much I don't like snow.

That's funny! I have the exact same picture! I took it the first winter that I lived in FL! I emailed it back to all my friend who were dealing with snow! LOL :)

I LOVE that photo!!

My favorite winter drink of the moment is Celestial Seasonings Bengal Spice Herbal Tea with a tsp. of sf Coffeemate Caramel Vanilla creamer stirred in. Mmmmm -- tastes like chai tea (without all the sugar).