Sometimes we forget that before our parents became parents they lived completely different lives - they were completely different people. They did amazing things, throwing caution to the wind so they could live their dreams.
Sometimes the dreams defer or change because of life and circumstances.
The old life gets put on a shelf - along with the pictures and the memories.
Occasionally a glimpse of that old life appears - a snapshot or a memory shared when pouring over old photos.
I was and am always in awe of my mothers old life. She was an a professional Ice Skater in The Ice Capades.
She made her own money at a time when most women did not - and she made more money than most of the men.
She performed all over the US and Canada, and had the opportunity to live her dream.
Her picture was on billboards, stars like Gene Kelly and Judy Garland waited in line to meet her and her cohorts, and George Petty voted her one of the 16 most Outstanding Ice Capets in both talent and beauty.
She gave it all up and married my dad. She became a mom and raised six children.
She gave birth to her first daughter at 22 and her last daughter in her mid forties.
She worked hard and helped my father start a business.
She had her share of heartaches, including three of her six children having type 1 diabetes.
And she lost her middle daughter to the disease.
The woman who dealt with diabetes 24X7 used to be a completely different person before my siblings and I came to be.
Through it all she remained the strongest, toughest, most beautiful woman I know.
She is the one who taught me to pull myself up by my bootstraps whenever life decided to throw me a curve ball - and to do it with a smile on my face.
She is the one who taught me by example that "the show must indeed go on!"
I was incredibly proud of my mom when I accompanied her to The Ice Capades 70th Reunion in Vegas last week.
Since she was one of the oldest skaters there, she was treated like royalty.
Younger skaters came up to have their pictures taken with her. Some recorded her voice because they considered her to be part of their history. She was interviewed for several podcasts and for the Ice Capades historical archives.
There were moments when I started to cry from shear pride. At one point I went up to thank a skater for interviewing my mother and for being so attentive and nice to her and ended up crying.
"Your mother is wonderful and she's living skating history, I'm incredibly honored to have been able to interview her." And then he gave me a hug and told me I was a good daughter-which made me cry even more.
It was a hectic, emotional, and crazy three days - and I wouldn't have missed it for the world!
LOVE YOU MOM! 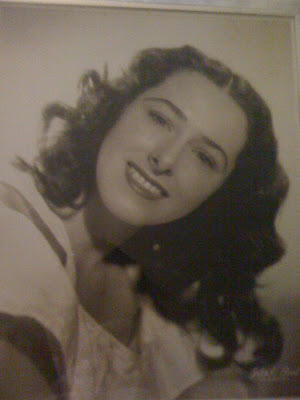 My mom when she was in The Ice Capades.
She was an athlete and performer, and was
simply beautiful~
500 skaters dancing on the strip 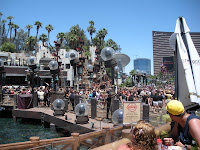 My mom & three friends from the show~ 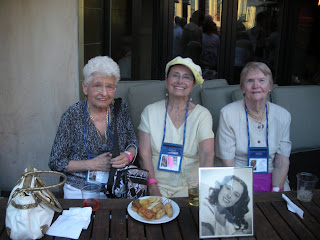 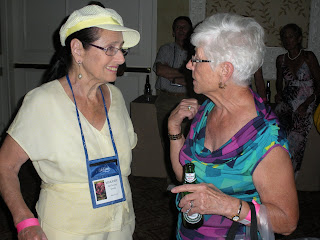 My mom and her friend &former roommate Mary 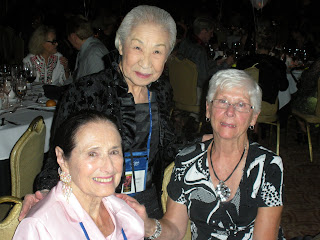 3 of the most seasoned professional Ice Skaters in existence
My mom (Ice Capades ) Reiko Kato(Holiday On Ice)
Mary H. Ice Capades
Reiko Kato is a Professor Emerita at Daitobunka University in Japan and is a Professor of Arts of Movement, Figure Skating & Dancing~
Sparkling Icicles - Vegas style! 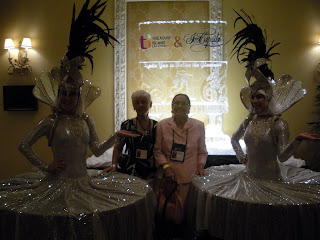 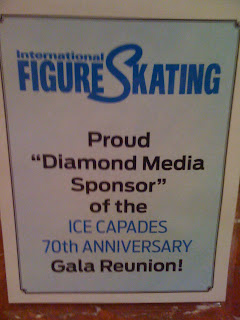 One of the official sponsors 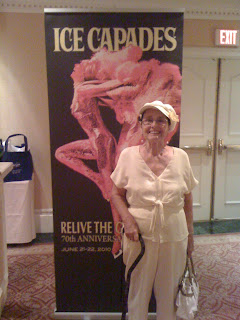 My mom, still beautiful after all these years! 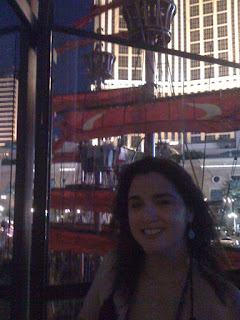 This "D"Pirate is incredibly proud to be her mother's daughter~
Posted by k2 at 7:00 AM

Thank you for sharing this part of your family history - she definitely looks adored by the others :)

This is truly and incredibly awesome! Thank you so much for sharing this, Kelly.

I think that's beautiful. Your mother is part of history. And I see where the show biz runs in the family. :)
Oh, and your mother is beautiful! You look so much like her.

That's a great story, thanks for sharing it with us!

Thank you so much for sharing this Kel. What an amazing woman, wife and mother. She looks truly awesome. And imagine that, her daughter is too! What wonderful memories you made with her during this trip. And you are a great daughter :0)

I just love this post K2. Your mom is amazing, and her sheer determination is very apparent in you.

Beautiful mom and wonderful pictures. It is just so very, very nice that you could be with her for the reunion.

Incredible! Thanks for sharing this part of your and your mom's life with us!

I bet it was cool as hell to be standing there beaming over your mother like she has done for you time and time again.

What a beautiful post! I just loved reading it. She’s incredible. And so are you. Thanks for sharing.

I know we talked about all of this when I saw you on Friday (yay!!), but I loved reading all about it and seeing the rest of the pictures. I was crying too, just reading your wonderful post!!! Thank you so much!

That is so cool! I see where you get your looks from, too! Thanks for sharing :)

OMGosh! I am SO glad I finally had a chance to read this amazing post. It fills my heart to it's bursting point! Now I see that amazingness runs in the family and I am not surprised. :)

I am so sorry I missed your Vegas trip but it looks like you had a fabulous time. *clink*