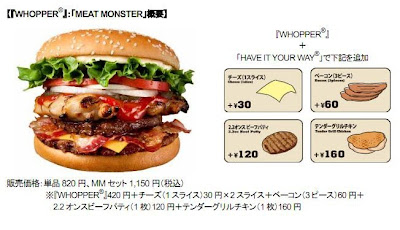 From the official Burger King "Meat Monster" Press Release.
Currently, only available in Japan. Hence the reason it's written in Japanese~ 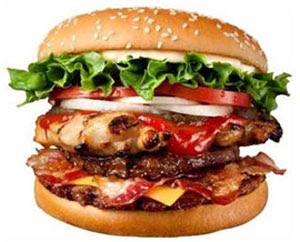 Holy Mother!!!! I think I spit up a bit in my mouth after I saw the picture! Who orders this stuff?
I sincerely LOVE that Gary would know how to correctly bolus for it!!! That's why he is so near and dear to my heart. Great stuff Gary - thank you, though I think nary Grace nor I will venture toward it, ever.
K - you should start a sidebar tally of all the monstrous foods out there - the pizza and 'wingz' - this, etc. That would be seriously funny.

I would just pull the bacon out and huck the rest.

Awesome, K2! Thanks for sharing that guidance. Now, I can't say I've yet to try this monstery goodness, but I'd probably be right on the money with that bolus breakdown (maybe a 30-70 or 40-60 split). Thank you for that, Gary.

Have you heard about the Hardee's Monster Thick Burger?

Eww! my husband is all YUMMY. blechh!

But thank you for posting Garys how to bolus for it, it just helped me bolus for upcoming buffet!

Bleh... As a newly diagnosed type 1 diabetic, I'm glad I'm vegan and should (hopefully) not have to worry about encountering such an... Abomination.

On another note, no one told me that too much fat can raise blood sugar! Hmm... That does explain why my numbers have been a wee bit too high since I've started eating three servings or so of nuts a day.

I could feed my whole family with that! (almost)

Gary should include the assumption that 1 person can actually consume all of that in one sitting...and that it stays down for the full 3-4(or more) hours to actually be past the point of vomitous. (Ack, it is just too disgusting.)

Though everything tastes better with bacon, so maybe I am being too harsh!