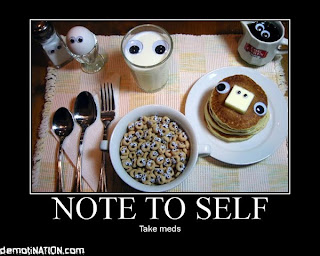 You're going to need a bigger bolus.
Photo courtesy of demoTiNATION.com
It’s never a good idea to lance your finger directly and on the exact same spot that said finger has a nasty paper cut on. You know the cut I'm talking about, the one that FINALLY stopped bleeding a few hours ago - And now is gushing again like Old Faithful because you weren't paying attention to where you stuck it. And yes, I know.... That's what she said ;)

Peanut butter and jam on a spoon is NOT always the ideal bedtime snack if your running on the high side.

Sinus issues DO cause wonky blood sugar numbers - At least in your case. So EMBRACE THE TEMPORARY BOLUS already!

Make sure that before you go to bed with 9 units of insulin left in your pump, you write yourself HUGE notes & leave them right by your alarm clock & charging cell phone, reminding yourself to lock and load a new insulin reservoir BEFORE you leave the house for work in the morning.

Low carb does not = low in fat.

When you see insulin pump batteries on sale, BUY THEM, even if you think you have more than an ample supply.

Sunscreen is a must, as is reapplying liberally.

Aspirin therapy = bleeding gums every single time you floss, so don’t have a major freak out and start crying to your Dental Hygienist "that something is terribly wrong!"
God, you're such a Drama Queen!

You are what you eat.

You are not a number, or your number for that matter. You are a person who is doing and being and trying her best - And that is a wonderful thing ~
Posted by k2 at 12:07 PM

Love this post. You always put into words what I am thinking. :)
Jen

So many wonderful nuggets of truth!

Great post! But I think I am a bit disturbed by the image of Toilet Paper Replacement Elves....

I recently decided to fire my toilet paper elf for lack of performance. When I informed my husband, he said his personal tp elf was outstanding and he was going to keep her. I asked what she looked like and he said "She's the spitting image of MY WIFE." I punched him in arm, hard, with my new-found kettlebell strength.

You are so awesome. And so is this post. ;) Doesn't matter how big I write the notes, I still dash out of the house w/o refilling the reservoir. Grr.

Note to self: kelly kunik is awesome!

Great list of notes! Especially love the last one! :)