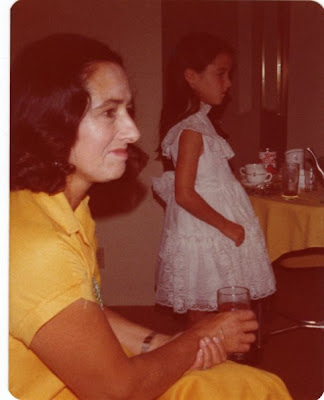 Mom ad I, four months before I was diagnosed
And she's still looking over my shoulder - Even though I can't see her.

So as one of the Executor’s of my mother’s estate, I have the task of going through years worth of her stuff - And at times it can be all consuming and incredibly emotional.

For instance, as I was cleaning out the kitchen junk drawer one day, I found two newspaper clippings from long ago.

One was from 1994 and it was all about the Diabetes Control And Complications Trial (DCCT) and the other from 2006 about how steel cut oatmeal was the better choice than instant or fast cooked oatmeal for people living with diabetes.

As I was cleaning out a drawer in her vanity, I found a newspaper article from July of 1990 (6 months before my sister Debbie died) about a new drug for transplant and dialysis patients re: Kidney disease. My sister started dialysis in the fall of 1990, and died in January of 1991.

And yesterday as I was going through her nightstand drawer, I found a 1995 clipping from the Associated Press about researchers successfully transplanting insulin producing cells from mice who were related, by tricking their immune systems into accepting the foreign cells.
And each I time I would find one of these clippings tucked away, I’d start to tear up, because it made realize several things.

Email ThisBlogThis!Share to TwitterShare to FacebookShare to Pinterest
Labels: mom-update, Parents of CWD

Love this perspective. Uncovering life through newspaper clippings -- it really does say something, doesn't it? Love the pic, too.

D moms are a super special breed. You mom was an amazing person. She raised some amazing children as well.

This was perfect and I loved reading it...going through my moms things when she died was one of the most heart warming/heart breaking things I've ever done. I learned more about her through junk drawers and post it notes than I knew when she was alive...and I FELT her in those drawers of newspaper clippings and lists (and pens...the woman had a strange obsession with pens). Soak in those moments, they'll turn into memories you will want to remember.
:)

aw, kelly. this is so sweet! my grandma always sends me newspaper clippings about diabetes. and you're right, she will always be with you. love you!

I'm reminded of a scene in the movie (and stage musical) BILLY ELLIOT where the dance teacher reads a letter Billy's mother wrote to her young son before she passed away.

After reading the moving letter, the dance teacher says "She most of been really special."

And Billy replies, "She was just me mum."

I know that you are thankful to have spent as much time as you were allowed with your mom. And I'm thankful that you've been so open and honest over the past couple of months.

beautiful post and photo! when my mom died (nov 91), we found her closet filled with christmas presents she'd been buying over the previous months.

My oldest daughter put a little poem in a frame for me that says, "A mother is a woman who can take the place of all others, but whose place no one else can take". There is just no one like your momma.