The Diabetes Fashion Files & Catching Up: Stick Me Designs

I’ve been playing an unending game of catch up with posts that were originally supposed to be running in the end of August through September, due to my mother’s 5 week hospital stay and death.

With that being said, I once again offer my apologies to everyone who has patiently waited for their posts to appear. 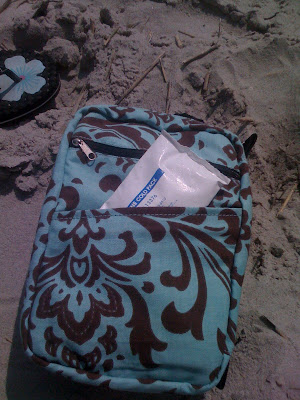 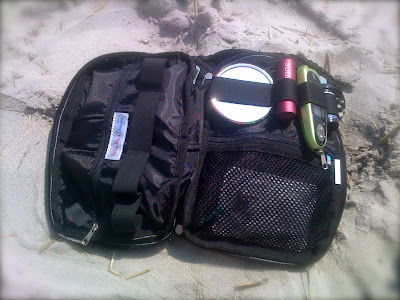 Back at the end of May, Rickina Velte, Owner of at StickMeDesigns sent me a Diabetes Supplies Deluxe Clutch Bag for review. I told Rickina that when I review a product, I really test it out, and would post about my experiences after I actually travelled with it.

I received the bag in the mail and quickly filled all it’s compartments with both diabetes and non Diabetes supplies. I took it to the beach ( I loved that it had a spot for an icepack) which kept not only my insulin and diabetes electronics in check, but it also prevented my lipstick from melting. I soon realized that a Frio pack worked MUCH better than a normal icepack. The Frio lasted lasted days longer than an icepack and still kept everything fresh and cool. And can I just say that during Hurricane Irene, Frio kept a new unopened bottle of insulin cool even when the power went out!

I used the Deluxe Clutch when I travelled to San Diego for Roche, and I have to say that having my diabetes supplies, ID, Airline tickets and cash all in one spot was quite handy and kept me from losing all of the above to the black-hole that is my handbag.

Same goes for my trip to Canada, except add my PassPort to the above mix.

But the Deluxe Clutch really came in handy when I practically lived at the hospital Mid August through the end September, when life's shit really rocked my world. When my mom was in the hospital I spent every single day for 5 weeks, (except for two days during Hurricane Irene when visitors were not allowed at or near the hospital) for six to eight hour stretches in the Intensive care waiting room or with my mom. Every day I walked around said hospital with a small duffle bag on wheels that held my Laptop/charger, a notebook, important papers, things my mom had requested, and the StickMeDesign Clutch.

With that being said, if your still looking for holiday gift ideas.......

Are the storage pockets big enough for Quick sets or Mio sets? Have wanted to but this but not sure my sets will fit in.