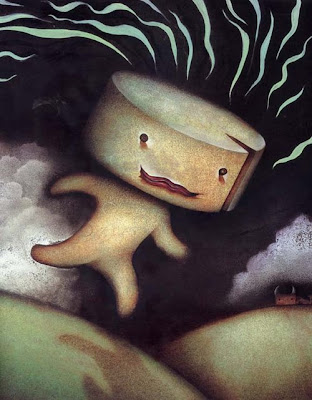 Cheese in motion, courtesy of The Stinky Cheese Man~
Hey is it me, or does his smile look like it's made of bacon??

So, I'm on a new reservoir cycle, and by cycle I'm going to get a little Diabetes OCD.

On Monday night around 10 p.m, I changed insulin pump reservoir.
Which really struck me as sort of weird (much like living with diabetes,) because 6 times out of 10,
I change my reservoir late afternoon.

And then last night with just four units of insulin left, I had to fill a new reservoir at 9:45 p.m. Again, much later than normal. Not that there's anything wrong with that, because there absolutely isn't.

As people with diabetes we fill up our insulin reservoirs whenever we need to, no matter where or when, or time of day for that matter.
It's just that for some reason I always seem to notice the time of day that I fill my insulin reservoir and I just automatically associate a certain time of day with changing my reservoir.
And now I'm noticing that my refill time seems to be off as of late. It's like someone moved my Diabetes Cheese!

OK, DO NOT get me started on cheese!

Anyway, has your Diabetes Cheese ever been moved or is this just another wonderfully annoying k2ism?
Posted by k2 at 2:18 PM

Yep, totally. It really urks me when my diabetes cheese gets moved to 8am, right when I need to be out the door (weekdays) or still asleep (weekends), or 11:30pm, when I want to be headed to bed and not messing around with reservoirs and new bottles of insulin, etc. etc. And it's random--one day, all of a sudden, the diabetes cheese is moved. And it's annoying. Urk. It's not just you!

And now I want cheese. A lot.