Paula Deen - If You Need Us, The Diabetes On-Line Community Has Your Back! 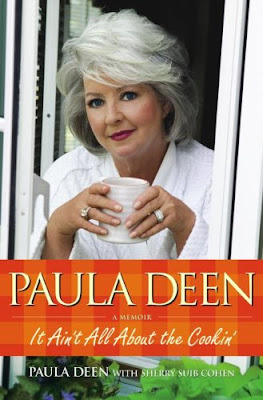 Diabetes ain't all about the cookin' either!
UPDATE TO THE STORY/BLOG POST: ON January 17th, Paula Deen announced on The Today Show that she'd been diagnosed with Type 2 Diabetes three years ago. At the same time, she also announced her partnership with Novo Nordisk and introduced their new website: Diabetesinanewlight.com . Paula also stated that she is currently taking the NN drug drug, Victoza.
#######
So there was all sorts of rumblings (and twitterings) on the internetz this past weekend about the possibility of Paula Deen being diagnosed with Type 2 Diabetes. Paula's people have yet to confirm the story and until they do, I won't say that Paula is a person living with diabetes, because I don't know.
But I will say that there was some pretty distasteful things being said on -line (and a few of those distasteful things being said by people with diabetes,) putting the diabetes blame on Paula, her cooking, and her love of butter.
And it pissed me off!
Here's the thing. I don't like it when somebody blames me for my type 1 diabetes - As a matter of fact, It makes me pretty damn mad! And I don't like it when somebody blames you for your diabetes - regardless of the type! That also makes me pretty damn mad because it's wrong on so many levels. NEWS FLASH: Diabetes diagnoses aren't all about the cooking!!!
And to say that somebody deserves type 2 diabetes because of that person's love and use of butter is asinine. Seriously, if that were true, than the whole country of France would have type 2 diabetes, and according to the research I've found, 3.8 % of France lives with type 2 diabetes, not 100%.
I like Paula's cooking enough to say out loud "Wow, that looks good," when I happen to catch her show on TV.
I can't say it's exactly my style - But I wasn't raised down south. But I can't say that I would turn down a meal at one of her many restaurants, because I wouldn't.
I respect Paula as a human, a television Chef/ Personality and a business woman who over came tremendous odds including debilitating agoraphobia to get where she is, and if she confirms that she has type 2 diabetes, then I will respect her as a person living with diabetes.

Others are blaming her for possibly considering a deal with Novartis and question the fact that she might actually make money of her presumed diabetes.
My thoughts: BFD. If Paula does indeed have diabetes,why shouldn't she make money off it? The drug companies certainly make money off diabetes, as do the heathcare professionals - so why shouldn't people living with diabetes make some money?? I respect companies more when they use a real person with diabetes in their advertising, not an actor playing a person with diabetes.
If Paula comes out as a person living with type 2 diabetes, I won't blame her, but I will welcome her into the diabetes on-line community with open arms!
Type 2 has a huge genetic link, and while diet certainly can be a factor in developing type 2, diet isn't not the be all end all reason for type 2 diabetes. And if that's the reason why you or your loved one has diabetes - That's OK, because I'm here to help you, not judge you.
Actually, the entire Diabetes On-Line Community is here to help you!
To blame someone for their diabetes not only prevents that person from seeking help with their diabetes (it's called a stigma people,) & actually perpetuates diabetes myths!
Blaming people for their diabetes also directly affects fundraising dollars for a diabetes cure. If the public perceives diabetes and all its forms as preventable, who will donate to raise funds for a cure?
The diabetes reality is that nobody, regardless of which type of diabetes they live with ( type 1, type 1.5, type 2, gestational, or type 3) wants to live with diabetes. Diabetes isn't a choice for the majority, it is a very real genetic reality. Just like having blue eyes.
I think it's our job FOR ALL OF US in the diabetes online community to show the public the real faces and realities of living with diabetes - regardless of the type.
It is our job to call out the media out when we see a diabetes media muck-up and it's our job to show the world that living with diabetes isn't a choice or a character flaw. It is a 24X7 reality that we never get a break from.

I love the smell of reason in the morning, well early afternoon that still feels like morning.

I don't think I could have said it any better.

Thank you, Kelly, for the support, and the mention. I reason with myself, that sometimes, it's important for stories like this break out... perhaps as a way to curb check our own biases and cast a light on 'truths' we may not have realized we were holding on to, so rather tightly.

Linked to you in my post about this very subject: http://www.d-mom.com/paula-deen-t2/

Great post Kelly! Your knack for cutting through the BS is very refreshing.

Great post Kelly. You make an excellent point about France. The US would be a VERY different place if we had the obesity rate of any European country. It's a real shame.

i love the way you say things! you just tell it like it is, and i think the world needs more of that when it comes to educating about Diabetes and how those of us living with it deal with it.