Dearest Miss Manners: Me Thinks You Know "Jack" About Living With Diabetes

Update2/27/14 : I was wrong re: Miss Manners not checking with someone with diabetes. Miss Manners has a son with t1 diabetes(he was diagnosed at the age of twenty,)  who helped pen the post in question. And according to their interview over at DiabetesMine re: the post in question. Mr. Manners does test on a plane from time time- which is interesting because that's not what was written in the post on diabetes etiquette that caused such a rumble in the diabetes jungle.
So yes, the do know "jack shit" about diabetes - Even if that didn't come across in their post.
Here's the thing: I believe if Miss Manners & company had chosen their words more wisely we wouldn’t be having this discussion because there wouldn’t have been such a blow up.
It would have saved a lot of heartache and hurt feelings and it would have helped everyone reading their post had they shared their connection to diabetes.
And lets say Mr. Manners didn’t want to disclose his diabetes, (he never stated that, but I totally get that if it was the case, it’s his right and his diabetes) they, and I say THEY because I’m still not entirely sure who wrote the piece after reading the interview over at "The Mine"  could have phrased the post in question somewhere along the lines of:  After consulting with a member of my family who lives with t1 diabetes, I’ve come to the conclusion Gentle Reader that testing in public can make others uncomfortable, but do what you must, just consider others around you -yada, yada, yada.Personally, I’m very glad he tests on a plane without always running to the bathroom, but it would have been incredibly helpful, educational & honest had he actually shared that information on the post in the first place.
XXXXXX


The question posed by the PWD:
DEAR MISS MANNERS: I am a businessman who frequently flies both domestically and internationally. I also happen to be an insulin-dependent diabetic.  I currently do my glucose testing in my seat. It does involve using a lancet device to get a drop of blood to test, but is fairly unobtrusive. Of course, all lancets, alcohol preps and test strips are stored in my test kit for proper disposal later.
Am I being rude to perform this test next to a stranger? Injections I perform privately in the plane’s lavatory. In the airport, I use the counter by the wash basin, since most water closets have no room for insulin vials and other supplies.Many people seem to stare and resent the fact of performing such a function in this space. I have also had children ask, “What is that man doing? Isn’t that a bad thing?” (They’re obviously thinking of their drug education classes.) Am I too self-conscious?Her response:
GENTLE READER: Absent an emergency, medical applications (like bodily functions and grooming) are properly done out of sight — meaning in private or in a restroom — unless they can be done so surreptitiously as to be unrecognizable as such.
Miss Manners does not object to a pill taken at dinner, so long as it is not accompanied by a dissertation on your cholesterol.The technology associated with diabetes is fast approaching this standard, although Miss Manners draws the line at drawing blood. Restrooms exist to provide a proper location for such necessary activities when away from home, and those who use them have no business monitoring the respectable, if sometimes unaesthetic, activities of others.You may chose to tell children that it is a medical procedure, or ignore them and let their parents do that. Miss Manners would hope that any parents present would also resolve to teach their children to be more discreet with their curiosity.

You can read the whole thing HERE , be sure to scroll 3/4's of the way down in her column,Miss Manners relegated blood sugar testing to the restroom when not at home. She made diabetes care sound as if it was something to be hidden and ashamed of. Miss Manners is WRONG. Here's my letter to her - And I hope you write your own and post it on the website~
Sixuntilme, @SaucyGirl/ Nacho Blog, Diaturgy , StrangelyDiabetic, The D-Log Cabin, TextingMyPancreas have written excellent responses - check them out! And when you write a post/ response, please leave a comment with the link and I'll be sure to post it! 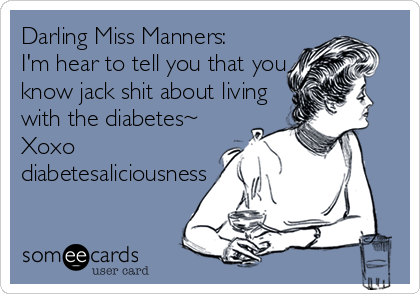 Me thinks before you comment on diabetes etiquette to a reader with diabetes,  you should walk a mile or ten in people living with diabetes shoes.

Testing ones blood sugar is a necessity, not a luxury and should not be relegated to the shadows of dirty restrooms .
When one needs to test ones blood sugar, it doesn’t matter where or when.
Diabetes doesn’t care where you happen to be when you’re blood sugars are starting to head south or north.
MM, Why should those of us living with diabetes get up and test our bloodsugars in a dirty, stinky, tiny plane restroom that may may or may not be spewing with bodily fluids, not to mention a shitload of germs - both literally and figuratively.
Miss Manners, are you aware that the amount of blood needed for to test is less than the amount of blood generated from hang nail?
Are you also aware that you are the one with the issue - Not the person testing their blood sugar?
There’s already shame associated with having diabetes and the fact that you are telling this PWD (person with diabetes) to hide in a public restroom is not only ludicrous, but it’s damaging to that person’s self confidence and owning and  controlling his own diabetes. It's unsanitary and it’s dangerous.
Would you suggest that a mother breastfeed her child in said dirty, small and  cramped restroom?
No, me thinks you would tell her to discreetly breastfeed her child from her seat and to do it in the most unobtrusive of ways.

I believe your exact words on the subject were:

So different than this part of your response to the person with diabetes:

"Restrooms exist to provide a proper location for such necessary activities when away from home, and those who use them have no business monitoring the respectable, if sometimes unaesthetic, activities of others."

And in order to live your best life with diabetes one must test one'sblood sugars over and over again - Regardless of the where or the when and who pray tell is around.
Same goes for administering insulin.
Again darling, if you knew anything about diabetes, you'd realize that flying causes stress and anxiety and both wreak havoc with blood sugars and that airplane bathrooms are less than sanitary, not to mention really cramped.

It's quite obvious that you know jack about living the diabetes life and yet you give advice on diabetes do's and don'ts.
The fact that the person who wrote to was testing at all should have been applauded instead of condemned, discouraged and shamed, which is what you were doing.

Every person I’ve ever encountered who lives with diabetes (and trust me, as a Diabetes Blogger, I’ve encountered thousands) has always done there best to test and take their insulin for that matter in the most non obtrusive and sanitary of ways whilst in public.

Miss Manners, did you actually talk to people living with diabetes before you published your answer, and if so, how many?
Have ever attended nursing or medical school? Have you taken a class at The Learning Annex about living the diabetes life.
What books have you read diabetes? I can recommend several- Ping me.

And while I agree that the evolution of diabetes technology has certainly evolved, I’d be remiss if I didn’t point out that said evolution allows people living with diabetes to test wherever and whenever they want or need to, be it on a plane, train and or automobile.
People can test their blood sugars while sitting in Starbucks or on the beach or movie theater.
Miss Manners - I know that you’ve written many an article on the art of apologizing.

Me thinks (actually, me KNOWS) that the polite thing for you to do would be to put your money where your mouth is and offer a sincere and heartfelt apology to all of the people living with diabetes that you’ve clearly offended.
Sincerely,
Kelly Kunik
Living with Type ! Diabetes for 36 years & testing her blood sugars wherever and whenever needed. Including  but not limited to: On a plane, train, car, wave runner, theater, church, synagogue, Starbucks & at my mother's funeral - Because I had no choice but to.
Posted by k2 at 1:05 PM

Well said Kelly... Thank you for standing up for all of us.

Well done. I agree. I wrote a post about it, too. http://www.joybenchmarks.com/2014/02/dear-miss-manners.html

Very well said, Kelly. Would love to see an apology. After all, it's the polite thing to do! I did my take on it over at Blogabetes.

Thank you for sharing your views. You clearly put a lot of effort into this post and hopefully it gives a glimpse to non-diabetics as to what we go through. To go with your ending, I will say I test on the treadmill at the gym, mid-run on the sidewalk, poolside, and have injected (I'm on MDI) pretty much anywhere without a bother. I added your post to my list of blogs who wrote a response to Miss Manners on my website. Again, thank you for sharing :D

Excellent response... thank you! Some people just don't get it, do they......