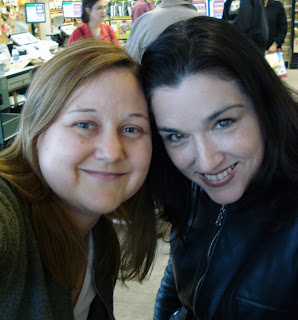 I knew I had work appts late in the afternoon on Wednesday, so I’d Twittered LeeAnn over at The Butter Compartment on Tuesday to see if she wanted to meet me at the Center City Whole Foods for lunch the next day.

My world has been so crazy the past few months and my head was spinning! I always feel better after a D meet up & LeeAnn is one cool Chicklet! She Tweeted back and said she was up for it.

I arrived a little early with a low blood sugar 60, ran in and quickly grabbed a cranberry juice, paid for it, gulped it, & met LeeAnn at the front door.

Then we just talked about Whole Foods being like this super wonderland of deliciousness, and there was no need to talk about the low, or why I needed juice & felt a bit anxious.

We walk around marveling at all the prepared foods. I settled for a big colorful salad with Qunoi and 3 oatmeal cookies. I was lacking in the veggie department as of late, and WholeFoods was just the place for me to catch-up!

LeeAnn had quite the hotplate of yumminess and we sat down to chat about life, diabetes, growing up with D. We talked about how difficult it must be for parents of D kids. We discussed our pumps, and different pump options we loved, and CGMS technology. We shared with one another the jobs we loved and the jobs we didn’t, and what we wanted for our futures.

What’s really wonderful about Dmeets (big or small) is the unspoken understanding between those attending. No explanations or excuses on testing one’s blood sugars, no “Diabetes Police” questions about the food on our plates. It’s amazing to be able to sit down with someone and not get the “WHAT THE HELL ARE YOU DOING?” look when you take your meter and lancet.

Diabetes & all the goes with it was part of our conversation, but more importantly, it was an accepted part of what we have to do day to day to just be. Am I making any sense?

I was sad when lunch ended. LeeAnn ROCKS! We both pulled out our cameras and took pics. Unfortunately, my battery crapped out and while the pics are on my card, they won’t download. DAMN TECHNOLOGY!

Lucky for me, LeeAnn sent me over the above pic to post. I can't wait to meet up with her again!

Later that night I was on Twitter and got the message from Sara, that George, & Scott were talking on something called Tokbox. It had been a long day, I was in my PJ’s, my hair was a mess, and I was sans lipstick. Did I really want to chat with my Diabetes buds in real time looking like this? The answer was YES, btw.

Then I got the Twit the Jamie and Charise were chatting as well. I thought I’d just popover and check it out, after all, I didn’t have to actually half to join in, I could just lurk.

But the minute I saw the checkerboard screen a’la the Brady Bunch, with everyone laughing and smiling, and heard their echo-e voices (they sounded like they were underwater-there's some sound quality issues if you don't wear headphones,) and I wanted in!

Cautiously I clicked on the guest sign-in and as my screen image began to take focus, I heard Scottie J say, “OMG its k2.” Then Ninjabetic chimed in,“OMG, it’s Kelly Kunik, this is great!”

Sara said, “k2, turn up your volume, we can’t hear you and say something funny!”
So, I did (turn up the volume that is) and said “Hello everyone!”

The whole group consisted of Sara, Scott, George, Rachel, Windy, Ninnifur, Major Bedhead, Cherise,Jaimie, Amy,(who I think I missed because I'd already logged off) tmana, Landileigh, Tim, Mike, and myself.

Big shout out to G-Ninja for the complete list!

The laughing was out of control and it was sometimes hard to figure out who was actually saying what. BUT:
At one point I said something like, “Hey, were the Diabetes Bunch!”
Charise’s daughter sang her diabetes song.
Sara took video and may or may not have flashed us – For the record, I saw nothing!
Tim wore a silly hat complete with hypodermic needle.
At one point both Sara and Landileigh started to sing the Olsen Twin’s hit “Brother For Sale.”

George grabbed a wig and Scottie J drank his bottle of soda from a paper bag a la 40 ounces for all his Homies in cellblock Diabetes!

I flashed my meter on the screen (with a high of 234 thank you very much) and actually received applause for my number. As a group, our numbers were a bit elevated that evening, and all were cool~

Midway through the conversation I did the universal shoulder tap (my image was next to George at one point) on Ninjabetic’s shoulder, and that started a whole reaction of pokes and prods. At one point I was actually tapping Scott’s skull!

It was just so wonderful to hear my D buddies voices in real time, echo-e or not!
My camera battery was still dead, so I grabbed my phone and took pic.

Not the best quality, but a great shot just the same
Tokbox is pretty cool site, I loved the real time chatting and hearing everyone’s laughter. 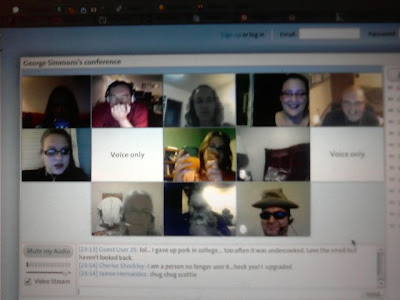 Next time, I will be wearing headphones to reduce the echo. I’ll also be wearing lipstick!

All in all, it was a pretty damn fine Diabetesalicious Day! Say that three times fast!!

Thanks again for the lunch invite. As always, it was great to see you - good food, good company and wonderful conversation! We were there so long that by the time I left, I was afraid my car was going to be gone because they had a sign about a 2-hr parking limit!

And I totally have to get in on this TokBox think next time. That sounds super awesome!

i absolutely loved the Diabetes Bunch!

we should have a slumber party aka TokBox, all in jammies!

The most fun you can have in your jammies without lipstick, right?? Glad you got to have some laughs!

You and Lee Ann are two people I would love to meet. I just think we would all click.

Anyhow the TokBox thing was awesome. I was soooooo happy when you joined. I know I shouted when I saw your face! so flipping cool and for the record, I had no clue your hair was a mess and that you lacked lipstick.

All of my friends are beautiful all the time to me. :)

LeeAnn-
Whole Foods is such an addiction! I'm glad we got to hang out and enjoy it together!
TokBox was so fun- U HAVE TO CHAT!!

DOCadmin
Tokbox Slumber party in our jammies - I'M ALL FOR IT!

Cara-
It was fun! I'm totally going to try to meet up witgh u in NYC, PROMISE!

Lora-
I'm such a lipstick hag! Being pale with dark hair requires that you wear lipstick so you don't look 1/2dead!

George-
WE would and do click!
I was so excited to see you!
Your kind words are greatly appreciated! Part of me still feels like the geeky 7th grader with big glasses and stringy hair who looked like Alfalfa from "The Our Gang," comedies.
Joan Rivers once said,"That pretty girls want to be funny, and funny girls long to be pretty!"
Your right, all our friends are beautiful and we are so blessed to have them!
THANK_YOU
k2

What a great day - and you post here made me smile again. I was so happy that you joined in with us, and I thought you looked fab as usual. That was such a fun thing to do.

And I am incomplete without some form of diet coke. My Burger King cup went dry, so I started chugging right from the bottle baby!! w00t!

My voice was a little froggy 'cause I'd been fighting a little bit of the crud. Next time I hope to not sound so much like kermy.

And we'll be sure to tell Sara to keep her shirt on next time (for the record I missed the show too).

SO cool.
Love the pic of you and Lee Ann.

Cannot wait to see you this Sun nite.....and everyone else.

Have a fab weekend.

Look at Kelly and LeeAnn! That is awesome. I totally understand the unspoken word:)
The DBlog video confrence was off the chain. It was cool to acutally put a voice with a face and tweets.

Hope you enjoy your iphone.

Fun fun fun fun fun!!! And don't you two look absolutely adorable!!! I'm in for the TokBox tonight too!! :)