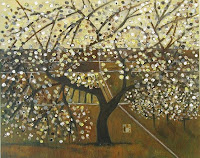 Well, it's way back Wednesday  and the following  was originally posted on December 27th, 2007.  Diabetesaliciousness was Just under two months old, and I was still learning the whole bloggity blog thing.
The following post  is based on the 1970's/ 80's Dr Pepper  commercial where the dude from An American Werewolf in London  sings: I drink Dr. Pepper cause I'm Proud
I used to be alone in a crowd...."
Anyway-  I gave it a diabetes spin- Hope you like it!!
SO, I was going over my whole Type 1 family history in my head the other day......

I start humming the theme to the Dr. Pepper Commercial from the 1970's.
You know the one, where the dark haired guy is by himself and starts to sing: "

NOT TO SELF: YOU WATCHED WAY TO MUCH TELEVISION AS A CHILD

I immediately change the words to suite my family history.

I loved this post when you first posted it and love it again now!

I want some pepper with my spaghetti please.

Same as George - but - now I can't get the damn song out of my head!

heh i love it! I was not born until the late 80's but my Mom used to sing that song to me all the time so I know it!

I always find it interesting to hear about your family history and all the T1.