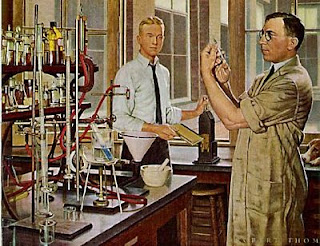 Heroes of the world: Best & Banting

On July 27th, 1921 millions of lives were saved, including ours.

On July 27th, 1921, Frederick Banting & Charles Best successfully isolated the hormone the world would come to know as insulin. Testing began by creating diabetes symptoms in dogs (and whether your a PETA fan or not, be grateful - You owe the Doctors & the dogs they tested on your life - literally and figuratively,) and a few months later, human trials were started.

Within 18 months, insulin became widely available (and thanks to the University of Toronto, royalty free to Pharma Companies) to the public and millions of lives were saved and they were awarded the 1923 Nobel Prize.

So today. regardless of whether your diabetes is playing nice or being bitchy, just remember that 90 short years ago, if Banting & Best hadn't changed the world, you wouldn’t be reading my blog post because I wouldn't have been around to write it!

And as long as were being honest - You probably wouldn't have been around to read it!

So while we continue to raise funds for a cure 24X7, 365 days a year, let’s remember to give thanks to Banting, Best!

Because without them we wouldn’t be here and the world would be a much less interesting place without people with diabetes in it!

I originally wrote & published the following post on January 19, 2010.

I feel that it's especially appropriate to repost it today & I hope you like it!

I just wanted to take a moment to Thank-You for giving me the gift of LIVING.

Because of you and your efforts, I've lived past the age of 8.

Instead of being yet another sad memory for parents who lost their child to an illness that offered no hope, I became a girl who not only lived, but grew up to be a woman who is becoming.

Because of your diligence and hard work, I had many firsts.

Too many firsts to list without leaving so much out.

Because of the gift of your discovery, I was able to live and learn and continue to do so everyday.

I became an Auntie multiple times and learned to love others more than myself.

I attended and graduated college.

I traveled to Europe and saw the wonders of Venice and Paris.

Because of you I was able to discover that I loved books, performing, writing, helping others with manage their life with diabetes, and every shade of the color green.

I’ve swum with manatees, and I've climbed the Mexican pyramids on the longest day of the year.

I was able to see my niece perform on Broadway and cried tears of joy and pride.

And was incredibly grateful and proud.

If you never discovered insulin, I never would have met her, let alone watched her shine on “The Great White Way.”

I've been granted the gift of 12 wonderful nephews and nieces and have been know the joy of seeing each of them grow and become the wonderful & individual pieces of art they are.

If you hadn’t had your own burning passion to save those of us with diabetes,

I never would have been able to discover my own passions.

I never would have lived, let alone blogged.

I wouldn't have a job helping others with Diabetes.

By your discovery of insulin, I was able to learn what I don’t like - Which is also a great gift.

Reaching adulthood has taught me that I’m no fan of FOX News or MTV’s The Jersey Shore.

And that I prefer wine over beer, V-Necks over Crew Necks, and my GPS over a map any day of the week!

Because insulin was discovered, my father was able to have children, and my siblings and I were not only conceived, but saved by your discovery - THANK YOU.

Thank you for not allowing my parents to lose three children and a grandson.

Thank you for giving my oldest sister the gift of motherhood 3 times over.

Thank you for allowing my nephew to graduate Berkley with honors and become a Professor of Literature.

Thank you for allowing both my Aunts and one of my first cousins to become mothers.

Thank you for my gifts of strength, tenacity,humor and empathy. I strongly believe those traits were greatly enhanced by being a person who lives her life every single day with diabetes.

Sometimes I think in the bustle of life and looking for the cure, we forget that it wasn’t until 1922 that children and adults no longer died when being diagnosed with diabetes.

Up until then, diabetes was a death sentence.

Today diabetes a life sentence- and by

“life sentence” I mean the ability to live life to the fullest EVERY SINGLE DAY.

I will admit, there are times in my life when I haven’t taken advantage of the act of living fully.

But now, I relish every moment big and small.

Little moments have just as much meaning as big ones – because I am here to experience them.

Do I want a cure in my lifetime?

I don’t want anyone else to be diagnosed with my disease. I don’t want another person to suffer mentally or physically because diabetes has entered their lives.

I am ready to say GOODBYE to Diabetes for good!

I love you without every having had the privilege of meeting you.

I think of you both everyday- and I say a prayer of thanks.

I want to live my best life not just for me and those I love, but for you.

Your the reason I'm alive.

To not live a great

life would be a disservice to me AND you!

I will continue“becoming" and, not just for myself, but because really, who am not to?

I am the girl who lived and is now a woman who IS....and is BECOMING.

at: Breakthrough,The Discovery of Insulin Exhibit in NYC

90 years after the discovery of insulin, there are still children and adults without access to insulin - And that’s OUTRAGEOUS.

If Banting & Best were alive today, I know that they'd be OUTRAGED!

Want change the world in the spirit of Banting & Best? Of course you do! And it's not as hard as you think!

You really can make a difference by taking part in The International Diabetes Federation's "O Is For Outrage Campaign."

Just click on the link below and create a virtual postcard to send to President Obama, urging him to not only attend the United Nation's Summit on Global Health issues on September 19th & 20th, 2011, but to show the rest of the world that he's committed to the prevention, control & help to remove the stigma of non- communicable diseases, especially diabetes.

What an awesome post Kelly. We all should say a prayer of thanks to him. The world sure is more amazing with all the D-peeps in it! Beautiful post.

Wow, what an incredible post. Stories of the invention of insulin always, without fail bring tears to my eyes. Your letter to Dr Banting & Best got me today. I am so incredibly thankful for insulin, without it I would have been for dead 32 years now. So very thankful for this date in d history.

Seriously incredible post! Thank you for sharing that and reminding us of this important day!

love the insulin viles window pic! did you illegally take that at the Insulin exhibit? i know i took a few when it was at the NY Historical Society :)

Well said.(and it's something we all need to be reminded of, periodically!) Thank you, Banting & Best!

As I wait for my correction bolus to kick my high BG back down this morning, I'm incredibly grateful...for insulin, and for your post! Thank you for this! Absolutely love your letter.

Totally grateful!!! Wow, 90 yrs ago. Funny I just read an Historical paper, who mention a fellow, bochemist who was pivotal in the success of developing usable insulin. Here is a quote:
"It was JB Collip the biochemist who had produced the
successful extract. He had developed a method of extraction
that involved changing the concentrations of slightly acidic
alcohol solutions of chilled beef pan creas. It is not clear
which members of the research team fi rst suggested using
acid alcohol until he was able to precipitate out the active
principle relatively free from toxic contaminants. It was a
major improve ment on Banting and Best’s methods, the
single most important step forward in the discovery process.1
Banting and Best were particularly confused and self serving
in their refusal to recognize their collabo rators contributions
to the work, as Newelyn Barker put it that “in insulin there
is glory enough for all”.1
The glory came almost immediately. On 3rd May, 1922,"

This was news to me. I will email you the article if interested.

This is a wonderful post. I am shocked to hear of how prevalent diabetes is in your family, however. Thus far in my family it's only me, my grandmother (deceased), and two of my uncles (all of us on my father's side).

so beautiful, thank you so much for sharing!