My Take On The Children With Diabetes Focus On Technology Conference

This past weekend I attended the Children With Diabetes Focus On Technology Conference in just outside of Philadelphia in Conshohocken, PA - And I had a blast!
Not only did I have the chance to meet up with many in the diabetes on-line community, I had the opportunity to learn about the latest and greatest in the wonderful world of diabetes.
The day started with Dr. Henry Anhalt, Chief Medical Officer and Medical Director of the Artificial Pancreas for Animas. Dr. A was funny and laid back and he spoke from the heart & explained in layman's terms what The AP actually does: The AP automates insulin delivery with Artificial Intelligence. And how outside of the United States, low glucose suspension pumps like the Animas Vibe and The Medtronic Veo are already available outside of the United States.
I wish I'd had the opportunity to speak one on one with him because I had so many questions for him, and quite frankly, I just wanted to give big hug and say : THANK YOU.
Next I sat in a session about Advanced Pumping Concepts, led by Rick Philben from Animas. Rick works for Animas has a strong background in Athletic Training and Sports Management. He's someone who believes in working out everyday, and practices what he preaches. He also has broken pancreas, so he understands the diabetes/sports conundrums like going low during a workout, post workout highs and experimenting with the temporary basal rate pre-workout, first hand.
Rick also pointed out that pump companies implement all these great bells and whistles on our insulin pumps, like temporary basal rates and pump alarms, and all sorts of amazing functions that we as pump wearers don't actually use them. And he's right, we don't. And we absolutely should.
And that got me thinking: WHY don't I set my pump alarm to remind me to test two hours after I eat, especially when I guesstimated a bolus for lets say, Lasagna or experimented with a temporary basal rate pre Aqua Bootcamp?
I'm great with setting an temporary basal rate, but I'm terrible about setting my pump alarm for things.
Currently, I'm in the process of moving, which is a form of exercise and is a MAJOR form of stress - And also the reason this post is a bit late. But thanks to Rick's talk,I'm now starting to utilize my pump alarm to test in two hour increments during the time I'm packing up boxes and pitching crap (sorry for the colorful term, but that's exactly what I'm doing,)just to see where I'm at. And because I have the tools to do it, so why not? Thanks Rick! 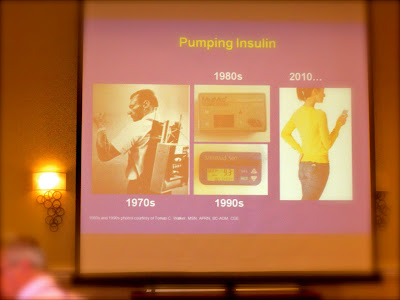 Rick showed us this slide: The history of insulin pumps
Yep, we've come a long way baby!
Next I had the opportunity to sit in a session led by Korey Hood, PHd and Associate Professor of Pediatrics at the UCSF/ Staff Psychologist at UCSF's Madison Center for Pediatric Diabetes and he talked about Diabetes Stress and Burnout and how to handle them better. Yeah, I definitely needed to some coping mechanisms, so I was all over it. Korey spoke about how little changes in the way we handle things, like word choices. Don't use "bad" when it comes to a high blood sugar number, it's not bad. Now we what we are and where we need to go. It was really interesting for me as an adult who grew up with type 1 to see the parents POV regarding their own diabetes stress and burnout.
News flash: They suffer from D stress and burnout too, BIG TIME. While it may be their children's' disease, they take on the stress and burnout just as much as we do, sometimes more so, because kids are resilient and get used to having a broken pancreas, but parents never stop worrying about us, even when we aren't kids anymore.
Finally, I sat in on Gary Scheiner's talk on Managing Hypos. I have to say, every time I hear Gary speak, I learn snew thingsw. This time, one of the new things Gary taught me was what a D'OH (think of Homer Simpson slapping his head and saying D'OH) means. D'OH stands for: Delayed Onset of Hypoglycemia due to exercise. HELLO, that occurrence actually has a real name? I was floored to learn that.
Gary something that stuck with me: Quantify your lows and stratigize to minimize - And plan for proper treatment of the lows.
Gary went on to mention that chocolate milk,(YES chocolate milk, which blew my mind) and foods high on the glycemic index like: pretzels, vanilla wafers & jellybeans were a great way to treat and prevent D'OH, which was news to me, especially the pretzels, I'd previously given up on pretzels, but now I'm seriously considering using them as a post workout snack to prevent D'OH.
I didn't get a chance to go to all the sessions - It was only a 1.5 day conference. But If I could have magically split myself in two and attended all the sessions, I TOTALLY would have.
Besides learning boatloads of stuff,f I had the chance to meet families from as far away as Nova Scotia (YAY CANADA) and the opportunity to reconnect with members of the diabetes on-line community.
Like..... 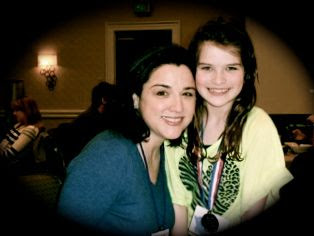 My girl Gracie, who brought home the gold!
Gracie & photo courtesy of Penny over at ASweetGrace.com 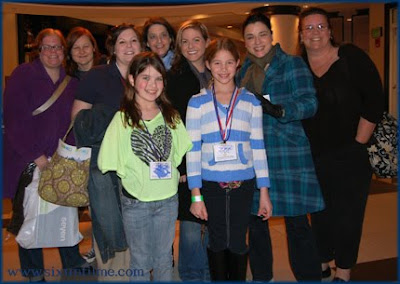 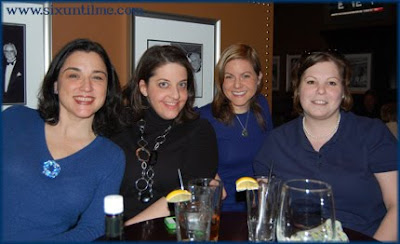 Four chicks with Diabetes walk into a bar....... And a fantastical time was had by all!
Photo courtesy of "Kerri Sparkles," I mean Kerri Sparling!
Speaking of sparkles, my Blue Circle Bling was courtesy of Penny Starr Ashton! 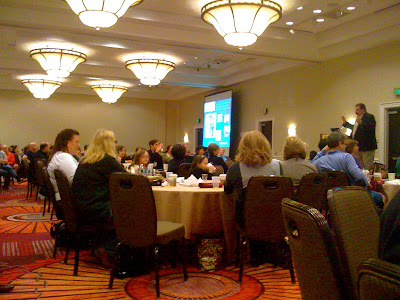 On Sunday morning, Diabetes Dad Tom Karlya was the closing speaker.
Tom had us all (including Penny) laughing & crying.
And then it was time to go home.........
And that was a bummer, because I wasn't ready to go home - I wanted to stay, and learn, and do.
BUT........ 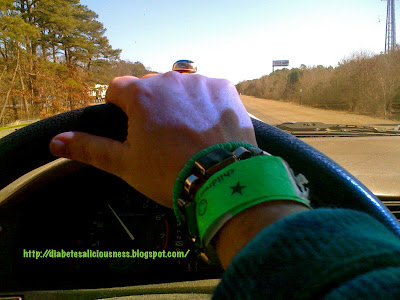 As I was driving home from CWD, I kept looking at my wrist on the steering wheel and I couldn't stop smiling at my green bracelet!
I'd waited a long time to wear one again and I wasn't going to take it off.
I had a great time at the Children with Diabetes Focus on Technology Conference and I'd come away with a better understanding of myself, my diabetes my diabetes hardware, and my diabetes options.
And I kept thinking about Florida and The Children With Diabetes Friends For Life Conference in July.
And come hell or high water, I'm going to find away to make it happen - For several reasons.
I LOVE Diabetes Land, and that's what being at a CWD Conference is, it's Diabetes Land.
I LOVE being with others who speak the language of diabetes in all dialects.
I LOVE seeing old friends and making new ones and never having to worry about testing or being out of glucose tabs, or the fact that my pump won't stop beeping.
And in Diabetes Land, everyone is testing, grabbing (and offering) glucose tabs, and their pumps are just as noisy as mine.
And I LOVE being in charge of my diabetes, instead of my diabetes being in charge of me.
And bottom line, Children With Diabetes helps me be in charge of my diabetes.
Even though technically, I haven't been a cwd for a very time~
Posted by k2 at 12:08 PM

Email ThisBlogThis!Share to TwitterShare to FacebookShare to Pinterest
Labels: CWD, Parents of CWD

Good pt about the pump alarm...we never use ours (tho I think we're all addicted to temp basals)...and we're big on choc. milk, serves us well...and love the big ring highlighted on the steering wheel!

It was a blast, we learned so much, we laughed, we cried. Good times with people I love. Not much more to ask for in life than that!

thanks for sharing your experience! my fam is so looking forward to FFL this summer. hope you can make it!

ps, good luck on the rest of your move!

Thanks for the great recap, Kelly. Sounds like a very good and informative event, with lots of fun too!