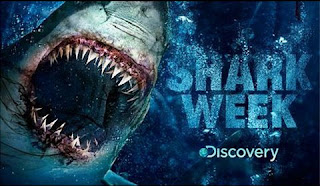 I’m obsessed with Shark Week on the Discovery channel, like totally obsessed.
Snuffy the Seal has become my mascot du jour.

Sunday and Monday night I watched shark scientists surf in the same waters as their subjects & heard interviews with shark attack survivors.
And last night when I should have been packing, or writing, or doing a hundred other things, I found myself glued to the television and mesmerized by all things shark.
Things like a reconstructed megaladon, a sharkcam and all it’s awesome and incredibly close shark angles of sharks swimming of the Massachusetts coasts, not to mention shark attack survivors.
And then there was the #voodoo sharks. Yes, the Louisiana #voodoo sharks and the urban legend  the voodooiest shark of them all, the elusive and never seen Rookin. Who is thought to be some hybrid of bull shark and god knows what else, and who kills pretty much anything in its path.
There was Louisiana Shark hunter known as Captain Blimp (I swear to God, that’s his name) who was either the bravest or stupidest man alive, and with a Louisanna accent so thick that there should have been subtitles when he spoke. He was fearless and funny.

And it seems like everyone is into  #Shark Week - or cross promoting it.

Ths week Wendy’s is serving their burgers in this contraption: 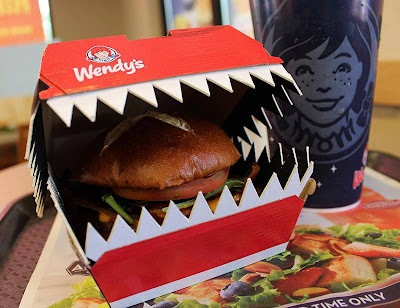 And...
Local bars across the country are offering Shark Week themed happy hours & there are Shark Week Drinking games.

Here’s the thing: I hate sharks - They scare the crap out of me!
I’m an ocean swimmer who used to surf & go long distance wave running and the thought of sharks freaks me the hell out out!
Yet, every year Shark Week holds me a willing captive!

And the brilliance of the marketing got me thinking that if someone like me, Kelly Kunik, a person who dislikes sharks intensely & is totally afraid of them, but who ironically also gets incredibly jazzed up one week a year & becomes a shark savant, thanks to #sharkweek sucking me in, why wouldn’t that work for Diabetes Week on Discovery?
How awesome would it be if THe Discovery Channel had A week devoted to diabetes?!
Shows about diabetes, the various types of diabetes, the history of diabetes, etc.
Diabetes technology and the science behind it, AKA, 'Diabetes Borgs!'
Maybe a show about the History of Diabetes Snake Oil Salesmen and women and the stupidity of those who pitch the Diabetes Oxygen & Ionized Cure or the Cinnamon Enema Cure.

Perhaps a reality show called, "When PWDs Attack,"whose attacks are brought on by The Diabetes Police & and the likes there of would make for good TV.

Don't even get me started on the whole Halle Berry angle!

How about  a night devoted to the mysteries of both the endocrine & metabolic systems, not to mention craptastic pancreases.

Hell, I’ve already done the treatment for a Diabetes MythBusters Show, so why the heck not!
You could even do a whole Movies Misquotes - D Style, just for shitz and giggles!

Discovery Channel, you'd be demystifying diabetes and educating the masses at the same time - It's a win - win!
Imagine the gifts you’d be giving to every person living in the United States who lives with diabetes, not to mention those who may develop diabetes and those who know absolute jack about diabetes.

And imagine the commercial advertisers - It's a cross promotional extravaganza! 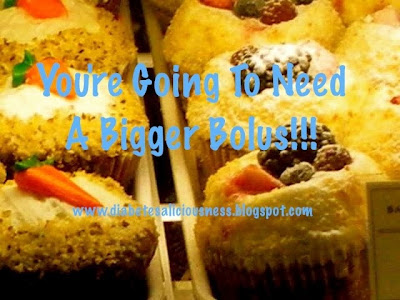 A day in the life of a beta cell... attacked by the immune system! Or blood sugar scattering thanks to an insulin injection!

Next on Mythbusters... Adam, Jamie, and the group totally blow up cinnamon as a cure!

Next, on #Sharpweek: diabetes bites back!

-D-cam: follow the 24-hour life of a diabetic, to show that diabetes never takes a rest (if we stop “swimming,” we’ll die!)

-The story of Snuffy the pancreas, taken down before his time

-Do You Believe? (The cure…does it exist?)

-Signs of the diabetes mating dance: Pumps in Odd Places

-Man vs. Diabetes: who will survive?

-Why Do PWDs Bite?: Be careful when feeding diabetics. Asking “can you eat that” can produce rage-chomping

-Feeding Frenzy: Three diabetics each have a blood glucose level of less than 4 mmol/l (72 mg/dl). Turn them loose on an open fridge and see what happens?

-The D-Cage: You are trapped in a cage of numbers, responsibility, and fallible d-technology, watch as diabetes attacks from the outside!

-Save Our PWDs: PWDs need our compassion; why “run away, diabetic attack!” fuels misunderstandings on the beach

-Inside a PWD’s Bite: Looks like glucose tablet residue

-Dzilla In Action: The media said WHAT about my condition?

-Adrift 47 Years With Diabetes: You Think 47 Days With Sharks Was Hard

-Suit Up: Donning Your D-Gear

This is a phenominal post! I'd love to see a Diabetes week!