Murphy's Law All Tricked Out, Diabetes Style - Had Worn Me Out

Diabetes requires the patience of a saint, and the tenacity and persistence of a woman speaking on the floor of the Senate.
######
This weekend a series of diabetes related events occurred that annoyed the crap out of me.
On Friday afternoon my new (as in two hours old,) omnipod’s Occlusion Alarm went off while I was out to lunch.
Lucky for me:
At this point, my bg was 320 and it took a few hours to go down.
I had a high blood sugar headache, did an injection correction when I walked in the door, and drank copious amounts of water. Finally, what went up did indeed go down.

And I was effing glad it was Friday.

Over the weekend my nose was all sorts of stuffed up and my throat was scratchy.
My bgs were slightly elevated and on Saturday I ran a temp basal rate of !0%, which helped keep my numbers in check. I was run down,  I knew it, and did my best to stop the sick in its tracks.
I stuck around the house all weekend and practiced self care - I ate healthy, slept late, and drank lots of water.

On Sunday morning I was feeling better, put in a new pod on my arm - so far so good.
Then a few hours later I went to my local Starbucks, where upon exiting my car, I smacked my bottom lip hard with my driver side door because my depth perception clearly sucks and now my bottom lip is all fat and bruised - and not in anyway, phat.
But back to Starbucks. Right after I ordered my decaf cappuccino, and exactly 2 hours and 20 minutes after I ate lunch and out of the blue - my bg dropped to 58. So yeah, GOOD TIMES. 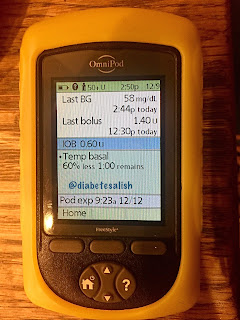 Cut to last night I decided to deep condition my hair with sesame oil (not the cooking kind,) and head to bed early.
If you’ve ever conditioned your hair with sesame or any other oil, you know it’s not pretty.
Your hair is slicked with oil and I was glad no-one could see me in all my greasy glory.
But I digress.

Right before bed, I noticed that my Omnipod PDM’s power bar was at half-mast.
And I was like: No big deal, I’ll put in new batteries. I ALWAYS HAVE EXTRA PUMP BATTERIES.
Except this time when I looked in the desk drawer I keep batteries in - there were no AAA batteries to be found.
I told myself that they were probably in my toiletry case.
I’d gone away on Thanksgiving and I remembered tossing an unopened four-pack of pump batteries in there. I opened up my toiletry bag and found everything but the 4-pack of AAA batteries.
Then I looked in my backpack, leather work bag, and two different handbags I’d recently used.
NOPE.
I looked in my kitchen junk drawer and under my couch for that freaking 4-pack of AAA batteries. NADA.
I took a deep breath, switched out my PJ’s for jeans and a sweater; covered my sesame oil-slicked head with and old ski hat, put on lip gloss, grabbed my keys and headed outside.
I jumped in my car and drove to my local Rite-Aid - which had always been opened 24 hours.
Unfortunately when I arrived I learned that that was no longer the case. Rite-Aid was closed.
There was a WAWA close by and I headed there.
Sidebar: For those of you who don’t live in the Philadelphia, New Jersey, Delaware, and parts of Florida and DC, WAWA is awesome.
But WAWA was not any shade of awesome this time -  as in my local WAWA doesn’t carry batteries.
WTF, WAWA?!
And that would be when a very kind and observant WAWA worker saw that the look on my face when I asked her about batteries, and told me that there was a new 24-hour Rite-Aid less than 5 miles away.
I thanked her and was happy I didn’t have to drive 10 miles to the closest all night CVS.
10 minutes later I pulled in the parking lot and purchased an 8 pack of AAA batteries.
18 minutes later I was home.
New batteries in my Omnipod PDM, 2 spares in my diabetes bag, and the rest placed gingerly in the desk drawer where I keep spare batteries and other such necessities.

Murphy's Law, all tricked out and diabetes style had worn me out - and as soon as my head hit the pillow I was asleep.
Posted by k2 at 4:06 PM

I found myself in FL with no meter before meters and strips were cheap. iI was on the first day of two and I pulled into a CVS to find the cheap meter and strop combo was $190.00. I was like oh holly hell. I decided to just fake the sensor. Yeah, that did not work so well. So I bought a clinitest and made it work. Oh sometimes life sort of happens.