The third day Of Diabetes Blog Week is all about bloopers, as in Diabetes Bloopers, and the truth be told, I have more diabetes bloopers than I can count - And it's hard to pick just one.
I have so many moretic moves (moron diabetic moves) that sometimes I call myself, "Molly Moretic the Moron Diabetic" just for shits and giggles!
I mean there were days when I was on MDI and I used to shoot my insulin through my clothes (don't judge, my doctor was more than fine with it) whenever I didn't feel like getting up from a table full of friends and family and hauling my MDI gear
off to the rest room.
I could fill up my needle and inject with out anyone seeing with no problem.
Murphy's law and diabetes would always come into play when I was wearing light colored clothing, which seemed to be the only time I'd hit a gusher!
There was the time in college when I was waitress at a back bay South Jersey shore seafood restaurant that is long since gone, and was taking my dinner insulin in the lone restroom in the joint.
I forgot to lock the door and a woman walked in and saw me flicking the air bubbles in my needle under a sole light bulb hanging from the ceiling sans fixture.
Yeah, it totally look kind of shady - but still!
So it was not a surprise that said chick turned around and ran out, ASAP!
Cut to me going to wait on my next table and seeing my customer was that very same woman.
Me: I'm not a drug addict - well not technically. I have diabetes, which makes me an insulin addict.
Her: OHHHHHHHHhhhhh, OK. Thanks for clearing that up.
There was the time I left my insulin pump at the chiropractors in NJ, ( I had to take it off to get adjusted) and drove 18 miles back home to Philadelphia.
Cut to me getting a phone call from the office 40 minutes before they closed and me literally
having to cross state lines during rush hour to pick it up!
The whole universal issue of Doorknobs literally and figuratively having centrifugal forces regarding their attraction to my insulin pump is legendary and I've written about it often.
Had cameras actually been rolling during one of those doorknob/insulin pump centrifugal reactions, I would have one America's Funniest Home Videos at least 17 different times by
now.
Back to the blood spatter. Gushers and light colored clothing are not something that happened to me with MDI. See the following pic that was taken after a doorknob/ pump tango. 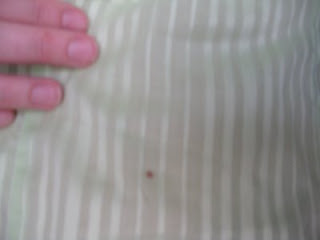 Favorite Dove Gray fitted shirt getting "Muphy's Law tricked out diabetes style!"
Image courtesy of Kelly's iPhone ~
Nor is blood splatter limited to CSI or doorknobs, pumps and or MDI. This pic was taken after testing my blood sugar and then getting back to the business of typing! 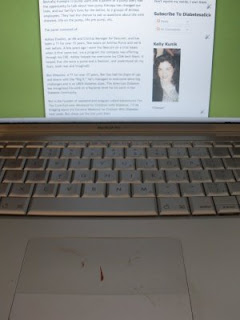 There was the time I was going to a diabetes meet up and wanted to make sure my breathe fresh before I walked into the bar, and this is what I saw when I opened up my Starbucks container of mints! 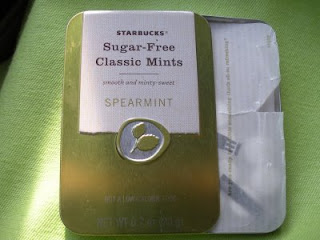 Actual Aeriel footage of "Two, two, two test-strips in one!"
Image courtesy of kelly's iPhone ~
Diabetes Bloopers? Yeah, I got a million of them!
Posted by k2 at 10:34 AM

Oh my gosh, I can just imagine that woman walking in on you! I bet that moment is frozen in your brain forever!

I'm so glad we/you can laugh at all this!

I can imagine your emotions, having to drive back to NJ to get your pump! Arrrgghhh!

The mint container is a nice added touch...

lol!! I always end up with strips in places strips shouldnt be..whyyyy!?

I love the bathroom stall moment! hee hee hee
I am sure you have a million of them hon, I enjoy giving this D a little humor every now and then!

I am always surprised when I'm the one making the blood trails after Bean has tested! Usually because she tends to make a way bigger than needed blood bubble and then leaves the strip in the meter!! Working on both of those 'issues' at the moment!!

Kelly -
My post today was "Gettin' High and Shootin' Up!" I know what you mean. And, shooting syringes through clothing... been there :)
Erin

This is amazing. I love all the pictures. I should start taking pictures of my bloppers too! I have so many of the same ones as you do!

Cracking up at the visual of you shooting up under the light bulb! Funny!!

I had one of those same moments once, where a man saw me doing that and told a manager who then threatened to toss me from restaurant or call police if I didn't leave... that was a FUN time!

I can just imagine the woman's look on her face as you approach her table to take her order after the scene in the bathroom, lol! And the test strips...too funny...I can so relate!

OMGosh! That bathroom story is hilarious! Love it! lol