A Conversation With A Power Puff Girl~ 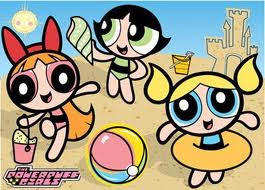 Power Puff Chicks on the beach!
OK, True story: I was at the beach this weekend, hanging with my friends and their army of children, and having a grand old time. The waves were intense thanks to Tropical Storm Colin - which was somewhere way off the coast. The water was warmer than it had been in weeks, and yours truly had a blast swimming, body surfing, and throwing a gaggle of 4, 5, & 7 year olds into the waves.

When I first got to the beach, I sat in my chair and talked with my friends - like a grown up. But after like 20 minutes I couldn't stand it anymore, I went down to the water, because I couldn't resist its spell any longer. I wasn't dissapointed - the temperature was perfecto!

And as I stood there watching the ocean, out from the waves (and like something straight out of The Little Mermaid",)walked my friend's little girl. A fantastical 7 year old who will be referred to as "Power Puff Girl" for the rest of this post. Running towards me she shouted: YAYYYY, you’re here!! I was going to get out, but now that you’re here, I’m staying in!

Me: Actually “Gorgeous” I was just testing the water; I need to go back and take my insulin pump off before I can go in - I can't get it wet. Come back to the chairs so I can put my pump in my cooler.

She grabbed my had tight and we started walking.

She pointed to my pump and looked up at me.

Power Puff Girl: Why do always wear that Kel?

Me: Well I have a disease called diabetes. Basically, there's this thing in my stomach called a pancreas - well actually, everybody has a pancreas. But there's this little part of the pancreas called the Islet of Langerhans that makes insulin, which turns food into energy. I can’t turn food into energy because the Islet of langerhan part of my pancreas doesn't work- like at all.

So I need to wear this insulin pump filled with medicine that does what my body can't. Guess what the medicine is called?

Me: Your totally right! Are you sure your only 7?

Power Puff Girl: Yes I am – but EVERYBODY thinks I’m older.

Me: I can totally see that- your very smart- plus you look like your 8, maybe even 8 and a half.

Anyway, before I wore this pump, I had take lots of shots, every single day- even on vacation and Christmas. I also had to eat at certain times, and I wasn’t allowed to eat any treats because then that was the diabetes rule way back then.

And when I was a bit older than you – I had to start giving myself shots every day.

Sidebar: Power Puff Girl's eyes got really big when I said that.

Now I just plug in the pump to this band-aid thingy called an infusion set/site - and no shots for two or 3 days! And guess what dude? I can pretty much eat whatever I want- as long as long as I eat healthy most of the time.

Power Puff Girl: Me too! I mean I eat healthy most of the time- but I’m allowed treats. And Kel, I'm totally addicted to ice cream!

Power Puff Girl: Does it need a charger?

Me: The ice cream? No, you just keep it in the freezer.

Me: Oh, OK. No, it just needs a new battery every now and then.

Power Puff Girl waited patiently (and watched intently) as I unhooked my pump, put it in a case, place said case in a ziplock freezer bag, and tucked it in my cooler, nestled between my iphone and ice pack.

As soon as I closed the cooler, Powder Puff Girl grabbed my hand with both of hers and we started walking towards the ocean.

Power Puff Girl: Kel, I am SO HAPPY that you have an insulin pump – I really am.

And that's exactly what we did. And a fantastical time was had by all~

AWWWW!!! Thats amazing! I love kids - they don't really judge. You just explain on their level, they understand, and look past it. It's the adults that can give you grief.

I am crying dude. WTF is wrong with me.

You know what, I too am sooo happy you have that insulin pump.

Kids are so honest and get it at such a great level, don't they? No pretense, no hidden agenda. It is what it is and it's all ok.
The G is at diabetes camp all this week. I know, I knoq, it's great for her, but I miss her presence in my life Kel. I am sure she will have stories when she returns.
Funny, she saw someone with 'your pump' at camp check-in and she said to me 'that's Kelly's pump!' - she remembered. :0)

My wife just asked me why the heck I'm smiling so much, like non-stop, and all I had to say was: it's Kelly's fault. And Power Puff Girl! SWEETness, totally!

You know K2... kids are just so awesome. They haven't yet learned that there are things they "can't" do. It is all so in the moment for them and when that touches our lives, it is truly marvelous

What a great story! Thanks for sharing!

Ok, this was really cute and I love how entusiastic she was to listen and learn. However I do have an issue with one thing you told her.

"And guess what, dude? I can pretty much eat whatever I want- as long as long as I eat healthy most of the time."

Uhm....most people on shots can do the same. My kids eat what they want, when they want. The only time they can't eat again is if it's been less than 90 minutes and then they need to back off the ratio so they don't double dip.

I know it's a small thing, but this girl seems really bright and you know she is going to be telling anyone who will listen her new found knowlege (which is AWESOME!) But now she thinks that you have to be on the pump in order to eat the way you want and that's simply not true.

Very sweet. Good for you for giving a good explanation too.

You are amazing with kids, Kelly! I love this post. Just beautiful.

PowderPuffGirl's Mother here--finally weighing in and reading your amazing, amazing blog!!!! Thank you for sharing that story of the conversation you had with my daughter. Simply stated, she ADORES you. You have such an amazing ability to connect with children. It's a gift.

I have to say too that I appreciate tremendously you taking the time to explain this to her.

You see--we come from a long line of diabetics. On my mother's side, Type 2 has hit all the ladies. On my husband's side, his dad (PowderPuff's Grandfather) died of complications from Type2 in 2006.

It is with great appreciation that I thank you for being another voice in her young life about the impact of this disease.

...and as much as I appreciate where Renata is coming from, let me say that it's best not to over- think it......I know my girl and her reaction was a pragmatic "Good thing there are tools you can use" Simple, end of story!!

Thanks again and can't wait to see you soon!!
xo