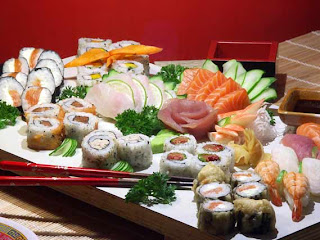 I’ll be honest; it took me a while to get into sushi. Actually, it took more than a while; it took a few years before I could actually eat a tuna roll.
Two things freaked me out about sushi.
The first and most obvious sushi freak-out had to do with the fact that for the most part, sushi is fish in its raw form.
Now me being a girl who grew up on the water, I couldn’t actually warm up to eating what I considered to be fancy bait.
The second sushi issue I had was the rice. As much as I love rice, rice is a carb that doesn’t necessarily love me. Rice is something I usually steer clear of.
With any rice related dish I tend to do an extended temporary basal rate  - And the same goes for sushi.
My temp basal rate for sushi is anywhere between 30% and 40%
for a two to 3 hour period.
When I first ventured into sushi territory, I stuck with California rolls, which were made with cooked seafood and veggies, but still required me to do a carb-balancing act.
Slowly, I veered towards raw spicy tuna and it’s tasty but milder cousin, yellow fin tuna. Soon I was embracing salmon rolls, and their more fattening counterparts, Philly rolls.
Now, I’m a bona fide sushi addict – at least when it comes to tuna and salmon. I’m working my way towards a more exotic sushi menu…eventually.
Anywho, here’s the cool (and somewhat unusual,) thing. Diabetically speaking, tuna/salmon rolls (preferably made with brown rice) don’t rock my blood sugar! As a matter of fact, 9 times out of 10, when I test, geusstimate carbs, and bolus, Blood Sugar Nirvana via sushi consumption is achieved, with post meal blood sugars somewhere between 137 & 189 two hours later.
I get the whole protein/carb dynamic duo perspective as to why it’s a good mix, but the fact that Blood Sugar Nirvana is achieved with a fish and rice-based meal TOTALLY blows my mind.
So my friends, are you bona fide sushified?
Or does sushi present you with all types of blood sugar issues that leave you frustrated, but still longing for more sushi?
FYI: I normally have a seaweed salad as an app before I eat sushi - it really helps fill me up so I don't go completely nuts when it's time to eat my sushi.
Also, depending upon how "ricey" my sushi looks when it arrives, I generally bolus somewhere between 35 & 50 grams of carbs. I also find that if I work out before I eat sushi, it really helps with my post sushi blood sugars ;)
And yes, I realize I've used the word "SUSHI" entirely too much in this post~
Posted by k2 at 11:55 AM

I must, MUST stick to sashimi platters. But even if I have a little of the rice on the platter, it spikes me to sights mostly unseen for my type 2 self. Oh well, it's all about the raw fish...and the wasabi...anyways.

I love sushi except it is too hard for me to handle (the carbs in the rice) and there is just too much mercury in seafood these days...so I don't eat it anymore :(

Funny timing... I just had my sushi dinner leftovers for lunch! The Sush treats me pretty well, too. I count each piece of the roll as about 4 - 5g carb and extend it out for a couple of hours. Works like a champ!

I have to do a massive SWAG bolus for sushi, and I'm certain it is because of the white rice and combination ingredients. It acts a lot like pizza on my BG's. I really think the carb counting guides should pretty much label sushi as "Your guess is as good as ours." I enjoy the sushi and my BG's a lot more when I go with a more fish-heavy rice-light sushi.

I think rice is actually quite easy to count!

Since I pretty much refuse to eat fish of any kind (except tuna fish in the sandwich form), sushi is a no-go for me. I did try a California roll once. Eww! :P

I LOVE sushi, california rolls, philly rolls, etc...but it doens't love my blood sugar!
What is your "guestimation" on carbs for these?
It never fails that I guess wrong and have to correct all night long :(

I just had a BIG sushi dinner on Saturday, at Kumo in North Wales. It was DELICIOUS and would have been nicer to my blood sugar IF I had more self-control :) (I'm currently on MDI, but I'll be on a pump in one week) I did learn that the salmon skin hand rolls had WAY more carbs than I thought they did.

I am amazed, but even with the sugared up rice (yes, there's sugar and vinegar in there), I maintain pretty even BGs when I feast on sushi. I guesstimate, add a bit on the top and end up pretty good. With these results, I gain confidence and plan to eat sushi much more often. :)

Connor once said of sushi, and he said this with no sacrilege, 'If god were food he would be this sushi.' (Spicy tuna roll at the California Grill Orlando Florida) It is possibly the very best thing I have ever eaten.

Sushi is always great for me, too -- doesn't bother my blood sugar too much, and doesn't fill me up.

I usually start with edamame and some clear soup, and then move on to tuna and avocado rolls. Yum.

I love sashimi. I love nigiri too but since each place has their own recipe for the rice (adds sugar and rice vinegar), it wreaks havoc on my bgs, especially if the rice pieces are big and packed in.

I try to stay away from the crazy rolls also. Those shoot me up like a rocket!

I do love sushi too, but I pretty much steer clear of the rice now, and I haven't ordered any tuna for several years (combo of overfishing of bluefin and mercury concerns). I do still eat eel, even though that sauce they usually put on it is awfully sweet, but I'm happy with sashimi.