The "Carb Counting With Lenny The Lion" App Is for EVERYONE! 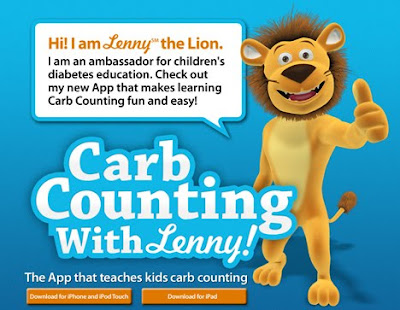 Who is is this lion called Lenny? Lenny is the official Medtronic Ambassador for Diabetes Education. Lenny wears an insulin pump and Lenny has his own free iphone/iPad application called “Carb Counting With Lenny,” that teaches kids to (and adults) to count carbs.
I downloaded the application at the end of August and I have to tell you- I really like it a lot. The app has a Food Guide divided by food groups that list the carb count and serving size when you touch the image on the screen. It doesn’t matter what brand pump you use, or if you use multiple daily injections – the application is ALL ABOUT CARB COUNTING, and one of the things I really like about it is that It helps EVERYONE.
Not only is the app great for kids and adults with diabetes, but I think it's a wonderful teaching tool for siblings and friends of children with diabetes,or children who have a parent with diabetes.
CWD or PWD, carb counting is a family affair!
I spent an inordinate amount of time playing the game and I surprised myself with what I did (and didn't ) know about carb counting.
I also like the fact that you can add pictures of your favorite foods. Let’s face it, all of us like different foods, and if you can add your kids (or your) food favorites - it makes life easier for everyone.
What foods have I added so far?
Vanilla SILK Soy Milk = 10 grams of carbs.
I also added the food of the Gods, a.k.a Nutella, which contains 22 grams of carbs with a serving size of two tablespoons.
Pizza is a given and in this case, it's from from SLICE Pizza, a fantastical joint in South Philly made my personal list of favs as well. My serving size for a slice of "SLICE" = 2 flat crust slices of Florentine Pizza with 45/51 grams of carbs for combined total. The carb count varies slightly depending just how flat the pie crust is. There's plenty more, but for the sake of time and space, let's move on.
The app includes 4 different carb counting games and heads up - the last 3 require the player to unlock the previous level in order to play. I don’t know that when I first downloaded the application (and from what I've read, neither did some others) and I thought I’d only partially downloaded the app. That wasn't the case of course, I just hadn't unlocked the next level -GOD a feel like such a gamer!
Anyway, according to Medtronic, since the applications launch, the response has been overwhelmingly positive from both parents and children with diabetes and thousands have downloaded the app.
Medtronic has been running a contest each week where the highest scoring registered player for the week wins a $25 iTunes gift card. If that’s not incentive for you or your kids to learn carb counting folks, I don’t know what is!
The contest has been running since September and ends November 5th.
Want to register to win? Here’s the link: http://www.medtronicdiabetes.com/carb-counting-contest/
Still need to download the “Counting Carbs With Lenny The Lion” app? No worries, the app is available on-line at the Apple iTunes App Store. I used the search term "carb counting" and was taken right to the app~
FYI: I was not paid by Medtronic's to Review this application.
Posted by k2 at 11:46 AM

That's awesome! And it's one more reason to wish I had an iphone!

Thanks for posting about this. We've never looked at this - and we are even Medtronic customers!

Checking it out now! How the heck did I know of this? Thanks for the heads up K2!

wow! this would be such a great app. for us, but unfortunately we can't download it in Canada! super bummer..

I just downloaded this since a)you liked it and b) it's free. This thing is pretty darn awesome! It's fun to play and it helps refresh your carb count knowlege without even thinking about it! Pretty genious, I think!
Thanks, K2!!!

I downloaded the app way back when it was first released. We've done it a couple of times, but it's not the first app my kids go to when they pick up my iPhone.

I did let the company know that their giveaway should include a random draw of ALL users for the week. Only rewarding the high score means that younger kids, such as my daughter, will never win.

(And you beat me to the punch, I have been working on a post about the app! Oh, well, you can hear my perspective soon :)

Great app and kid-friendly - I love that!
Thanks for finding and sharing Kel!

OK..OK...as anti-gaming that I am...I'll scope it out for Joe. We are teaching him carb counting these days and I am sure this will help. I've seen this lion, but never really paid any attention to him...and we are Animas Ping users, but I am assuming anyone can use the app.

I love it "food of the gods, Nutella" Oh, Kelly, you are right on again, thanks for informing and specifically, for your take on this whole thing.

Thanks for the info :)

Going to grab the app now - thanks for sharing!!!

Coolness ... I'll have to check this out, maybe I'll learn something I didn't know about!

I looked at it and was put of by the registration lack of a way to opt out of emails to the registered user. I have issues with business use of kids mails. I didn't think Lenny respected kids privacy enough. To their credit Lenny's people were very receptive to addressing privacy.