Do You Plan On Attending Breakthrough: The Dramatic Story Of The Discovery of Insulin? 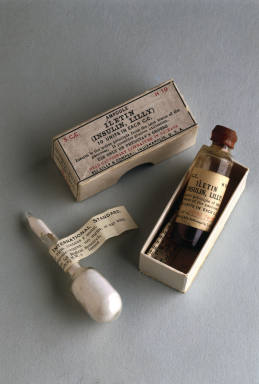 As many of you are aware, the New York Historical Society is currently housing an exhibit called: Breakthrough: The Dramatic Story of The Discovery of Insulin.

The exhibition opened on October 7th and runs through January 31, 2011.

It's divided into chapters showing the public how history, science, leaders in government, industry, & higher education combined roles & resources in the in the discovery of insulin.

And according to what I’ve read, the people who played a major part in the discovery are personified, as are patients whose lives were saved by the discovery.

I think the personification will really allow those in attendance to not only make a historical connection, but a personal one as well.

Diabetes is a personal disease because it touches so many people - and I believe that the exhibit will bring home the fact that without insulin - many family members of those viewing the exhibit would not be here had insulin not been discovered.

As all of us know that without insulin, many of you wouldn’t be reading this post, and I certainly wouldn’t be here to write it - we'd be dead.

Since my 33rd Diaversary is just a few days away, this fact hits home now more than ever.

Before Doctors Banting & Best discovered insulin, diabetes was indeed a death sentence. And while insulin is not a cure, insulin allows all of us to live.

And YES, a diabetes life certainly has its challenges - but a life without insulin wouldn’t equal a life at all.

Each of us would be only a memory to those that loved us.

Another great thing about the exhibit is that The Diabetes Research Institute has provided the exhibit with all the diabetes informational handouts – which tells me that the public will be getting the right information regarding our disease.

Every single person with diabetes can tell you that thanks to the press, most of the time the public gets diabetes ALL wrong.

In this case – the public will be getting all the correct facts on diabetes – THAT’S HUGE in my book!

Do I plan on attending?? Well, as I've stated in my previous Thank You to Dr's Banting's & Best,

If it hadn't been for them I never would have been:

"The girl who lived and is now a woman who IS.... and is BECOMING.

So YES, YOU BET I'm attending.

This is my chance to pay homage to them - and I wouldn't miss it for the world!

Went. Loved it. Blogged it. Thankful. :) Can't wait to read your take on it.

I was a little disappointed, to tell the truth. There was a surprising lack of distinction between T1 and T2, and the big informational card right at the beginning of the exhibit lacked the shibboleth, "autoimmune." There was also a line, after T1, T2, and gestational D had been described, which said something like "Diabetes is linked to genetic, diet, and lifestyle factors." Huh? I wasn't quite sure why they were even talking about T2 since 99% of the exhibit was about T1.

Then there was something else which really bothered me in the display about Elizabeth Hughes. The card on the wall quoted a sentence from a letter she wrote to her mother after going on insulin, which said something like, "I'm even eating candy now!" And then there was this snarky little comment going along with the quote which said (again, paraphrasing) "After insulin became more standardized, such carefree diets were understood to be a bad idea." Which would be annoying and incorrect anyway, but if you looked Elizabeth's actual letter, which was on display, that sentence was part of almost a page in which she was explaining to her mother what a low blood sugar was (of course, she had never been low before she went on insulin!), and how great it was that she was allowed to eat candy to treat it. So not only did they take a sentence from a very interesting letter completely out of context, but they added a healthy dose of Diabetes Food Police from the curator as well.

The exhibit is definitely worth seeing and it was fun to go with some other T1s from our NYC Meetup group, but it has to be said that I think they could have done better.

I'd like to go. When are you planning on going? :)

I would LOVE LOVE LOVE with all my heart LOVE to go. I'm all the way in California. ;( Go for all of us Kelly. Soak it all in and let us know how wonderful it was. I'll be waiting anxiously for your post. I know with your wonderful words, you'll make all of us who are too far away, FEEL like we were there too.

We all went - family field trip. I hope you enjoy!

I'd love to go also. I may be close to New York on Sunday November 7th. Want to try and meetup then?

I am most definitely going!!! Pete and I would love to get together with a few more PWDs and go as a group. :)