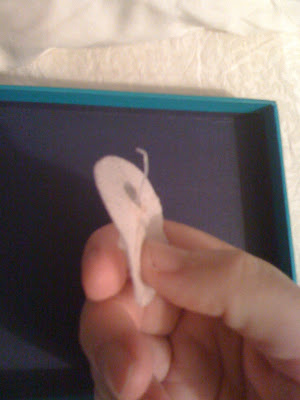 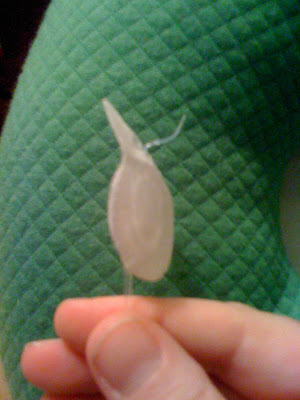 So part of being a person with diabetes who wears an insulin pump is that your infusion sets and infusion sites have their own issues and idiosyncrasies. Sometimes infusion sets get kinked or the tubing gets knotted or ripped out during "vigorous" activity or doorknobs.

Other times, Infusion Set Nirvana sets in and you don't want change your site because your infusion is working so perfectly - which ironically, was the case with the two infusion sets above.

Both sets delivered the insulin just fine (more than just fine - my were numbers were fabulous,) both sets had no problems with absorption, and both sets stayed on for three days each.

And both cannula's look like they had the sh*t kicked out of them!

I thought the first set was just a one a million super hero cannula that could take a licking on keep on ticking. I figured the tubing had been pulled because of my insulin pump clip on my pants and caused the cannula to look a bit funky.

When I saw the second one a few weeks laterI started laughing again, because once again- as funky as the cannula looked, it rocked the insulin delivery.

I've come to the conclusion that it's not about how something looks. Because in the end, it's really about how that something works for you.

And those infusion sets worked performed delivering insulin on my thigh sites like rockstars - so there's no need for me to "get bent!"

I had this one time when I removed the infusion set and I started bleeding like hell! O_o What the? It must have been placed in a blood vessel or something?

kelly, i use these also. i've been so impressed with how i rarely seem to have infusion problems---even when i pull the thing out and see what it's "been through" and then look back and think of how stable my numbers were. hysterical but so, so true post! :)

It's always so weird to pull out a site that was working normally and see it was kinda jacked up.

Diabetic Lolita - when we took our daughter in for her pump start class, there were two adults with Type 1 and they both warned us about the VOLCANO OF BLOOD that would sometimes happen for no apparent reason when removing the infusion set. Luckily it hasn't happened (yet) but we sure were glad someone warned us about it!