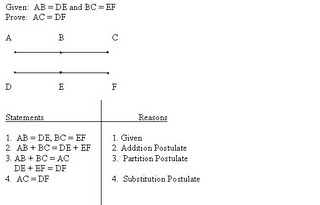 I was NOT a math major in college and as long as I’m being honest, I barely made it through high school algebra & geometry! No, I was Literature, History & Social Studies girl!

And had it not been for my love of movies, I NEVER would have survived High School Algebra & Geometry - I'm totally serious! I had the same teacher for both algebra & geometry, and he felt so sorry for me and my math struggles/anxiety, he made all out test extra credit questions based on movies! By doing so, I was able to barely squeak by those classes with C.

But for some reason, the Partition Postulate has stuck with me, even after all these years.

Partition Postulate: The whole is equal to the sum of its parts.

OK, I can relate to that – and it makes perfect sense to me... in theory.

But like I’m prone to do, I’ve given the Partition Postulate some diabetes twists ~

The Diabetes Pancreas Postulate: Is based on the whole of the Islet of Langerhans being destroyed, and therefore being unable to work in the organ known as the pancreas, which makes the pancreas unable to produce insulin.

Which, requires said person with said bum pancreas to partake in injections of insulin either via MDI (multiple daily injections,) or portable pancreases – a.k.a, insulin pumps for the rest of his or her life and deal with the Diabetes Police almost as much.

If that were really the case, morons wouldn’t be elected to congress because their brains were faulty and the Kardashians wouldn’t have a show because they lacked basic conversation & behavioral skills.

You know what I just realized guys? Had my teacher used diabetes as examples in his theorems and postulates, I would have totally nailed his classes and walked out of them both with an A!

Which, through several transitive steps and at least a couple of contrapositives, leads to the conclusion that the functioning parts of many of the people who purchase TV ad timeslots (who are the real powers behind the Kardashians being on TV every time you bolus) are depleted every time they raise their heads, and we hope that they either get intelligence pumps with automatic extra-boluses when their IQs drop below a pre-set level, or that they qualify for the Darwin Awards before contributing to the gene pool.

LOL I had to read it twice! I too suck at math awesome example!!

And im guilty. I love the kardashians :)

My brain hurts a little. But I'm slowly processing it all!

Here is a math problem for you.
K2+Blog=awesome

I SO suck at math. Although I also suck at science. Ironic? Yeah. The fact that I was doing all kinds of math when Sweets was on MDI was not lost on me... Nor was it fun. Somewhere my high school math teacher is laughing. And I'm pretty sure I heard an "I told you so".