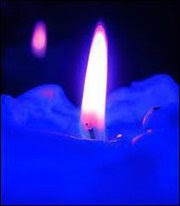 Six more lost
Six more lives dimmed
Six more blue candles lit in their honor
Six more souls to pray for
Six more families who will never be the same
Six more people who lost their lives to type 1 diabetes this week.
Six who range in ages from 18 months to 57 years. Including an 18th month old who was misdiagnosed and died from dka, a 9 year girl in France who committed suicide by jumping out a 5 story window because she was tired of living with diabetes.
A 16 year old boy who I believe had dka, and three women ages 24, 27, and 57.
The 24 year woman lived in Australia and never woke up.
The 27 year old was a mother of two small children.
And this morning I found about the sixth - A 57 year old woman from the state of Washington whose name was Jamiyya Laner.
Six strangers to us in theory, but family members none the less because of diabetes.
Six too many.
Six more reasons why we need a cure.
Posted by k2 at 3:25 PM

These are the ones we learn about...trying to comprehend the number of stories we don't hear about is overwhelming.

Blessed to be united with so many wonderful friends.

This is horrible, I cannot imagine the pain for those families.

And I came across another report today. Although the sudden cause of death of this 41 year old type 1 diabetic remains unknown, it's hard not to think what I'm thinking.

It gets harder to hear the longer I live with this disease.

Yep...I too am starting to wonder for every one we hear about...how many others are there?

Once again, diabetes is deadly in more ways than one...Once again, we need a CURE.

I wasn't around online much this week. Is it bad that I'm kind of glad I missed out on this? My heart aches for the families of those who passed away.