Low Blood Sugar Squall:
1. A low blood sugar that comes from seemingly out of nowhere and causes a sudden disturbance and commotion from within and causing to you feel like you’re going to pass out and you pray that that the food you just shoved down your throat kicks in before you drop.
2. Time seems to stand still while the battle wages from within and you’re waiting for your numbers to go up.

3. It’s scary and it sucks and I do not recommend it.

#######
The low blood sugar came out of no where and so quickly that it reminded me of a  squall that moved from sea to the shore in a flash and had the potential for destruction. - Except the disturbance was from within and it was my low blood sugar causing all the commotion, not the weather. Hence the whole “Low Blood Sugar Squall,” name.
I had just sat down and set up my laptop at the local library for an evening of uninterrupted writing, .
As soon as I sat there ready to read my typed notes, I got that feeling in my stomach.
You know that feeling - Where it feels like your standing at the top of the Empire State Building and all of a sudden you drop all 102 stories in 15 seconds flat, land on your feet - but you feel like you’re still dropping? Yeah that feeling.
At the same time I could feel myself breaking into a cold sweat and I was so glad to be already be sitting. I dug into my handbag and grabbed the mounds bar I’d thrown into my handbag without thinking, tore off the wrapper and shoved the the two mounds pieces (didn’t there used to be three pieces in a Mounds Bar) and I ate the whole thing in 4 bites and then took my blood sugar. I was 55.

I’d battled elevated bgs for most of the day and had changed both my insulin reservoir and my pump site a few hours earlier. Obviously, the new set and site work.

And I did. And I ate more than the 15 grams they tell you to.

I ate 29 grams of Mounds bar goodness - But I didn’t even get to enjoy the Mounds ride because I ate so fast.
And as I waited out the low the minutes were ticking by slower than molasses and I tried to keep calm and fight back the water works at all costs.
I  stayed calm - But for a split second, I considered texting or calling my friend and letting her know what was going on - Just in case.
She was literally minutes aways, but:
I needed to stay calm and keep my mind clear - My Facebook page looked back at me from my laptop and and I typed the following status:

And then Scott Benner commented: 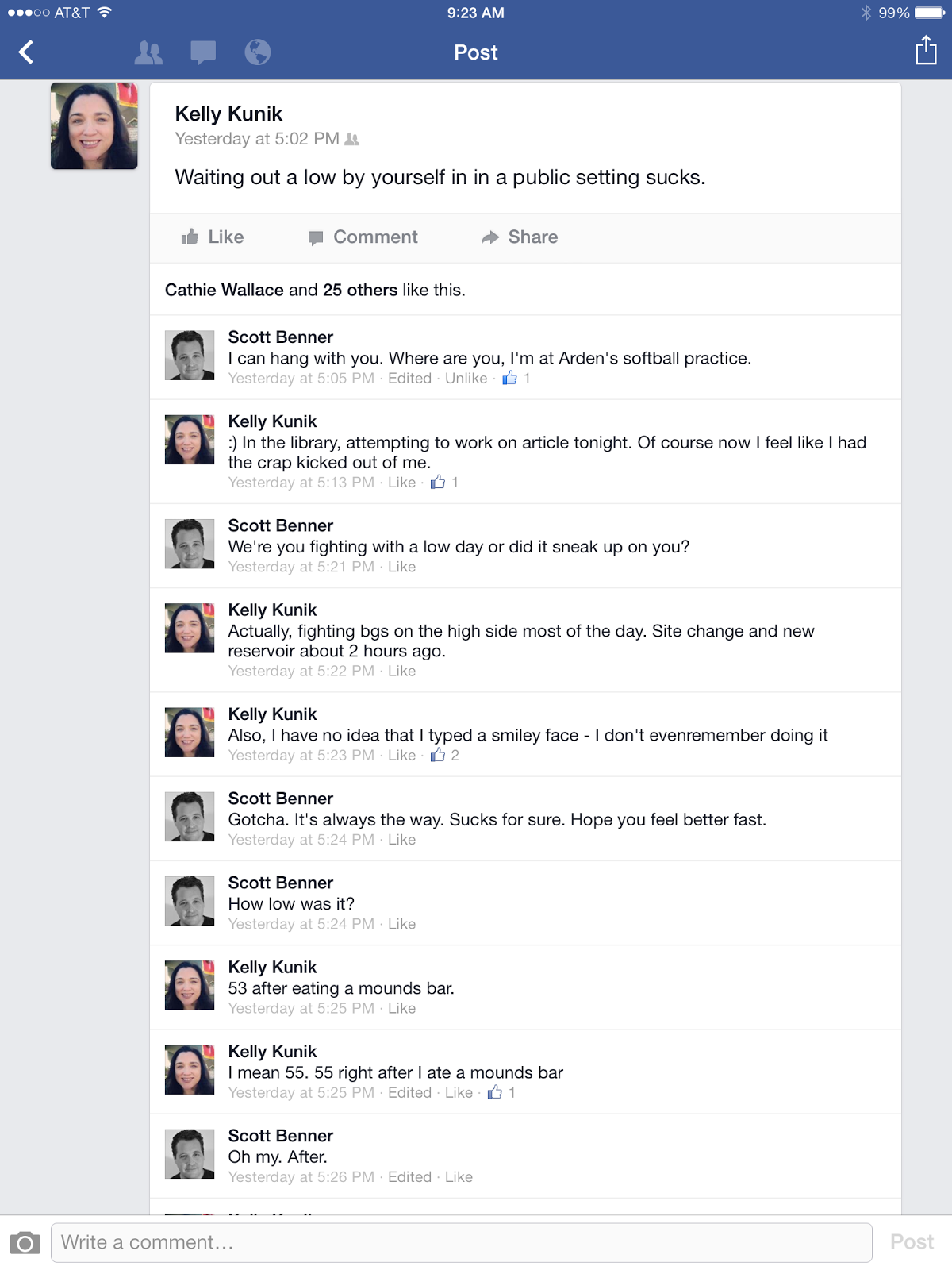 And then others started commenting: 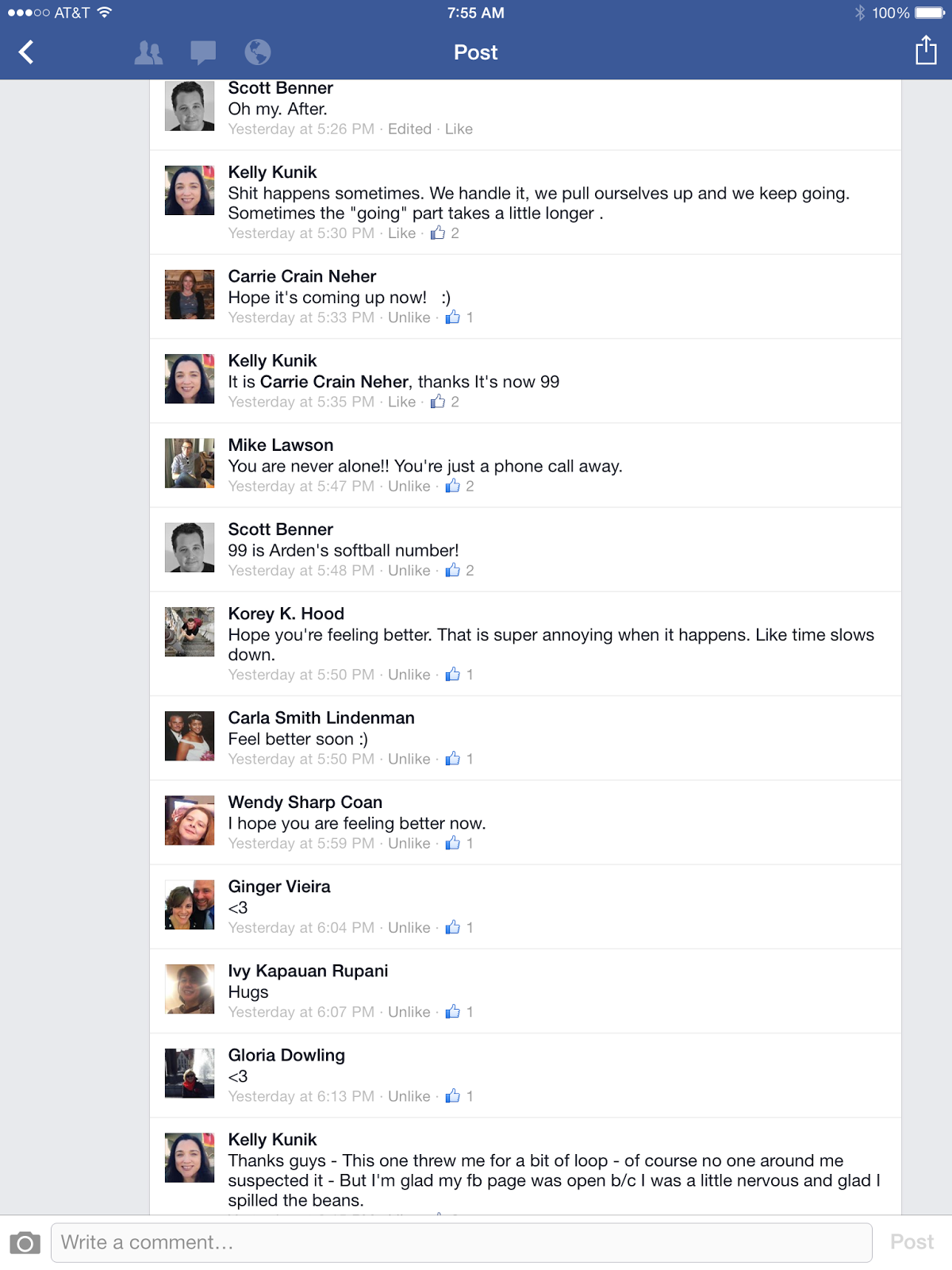 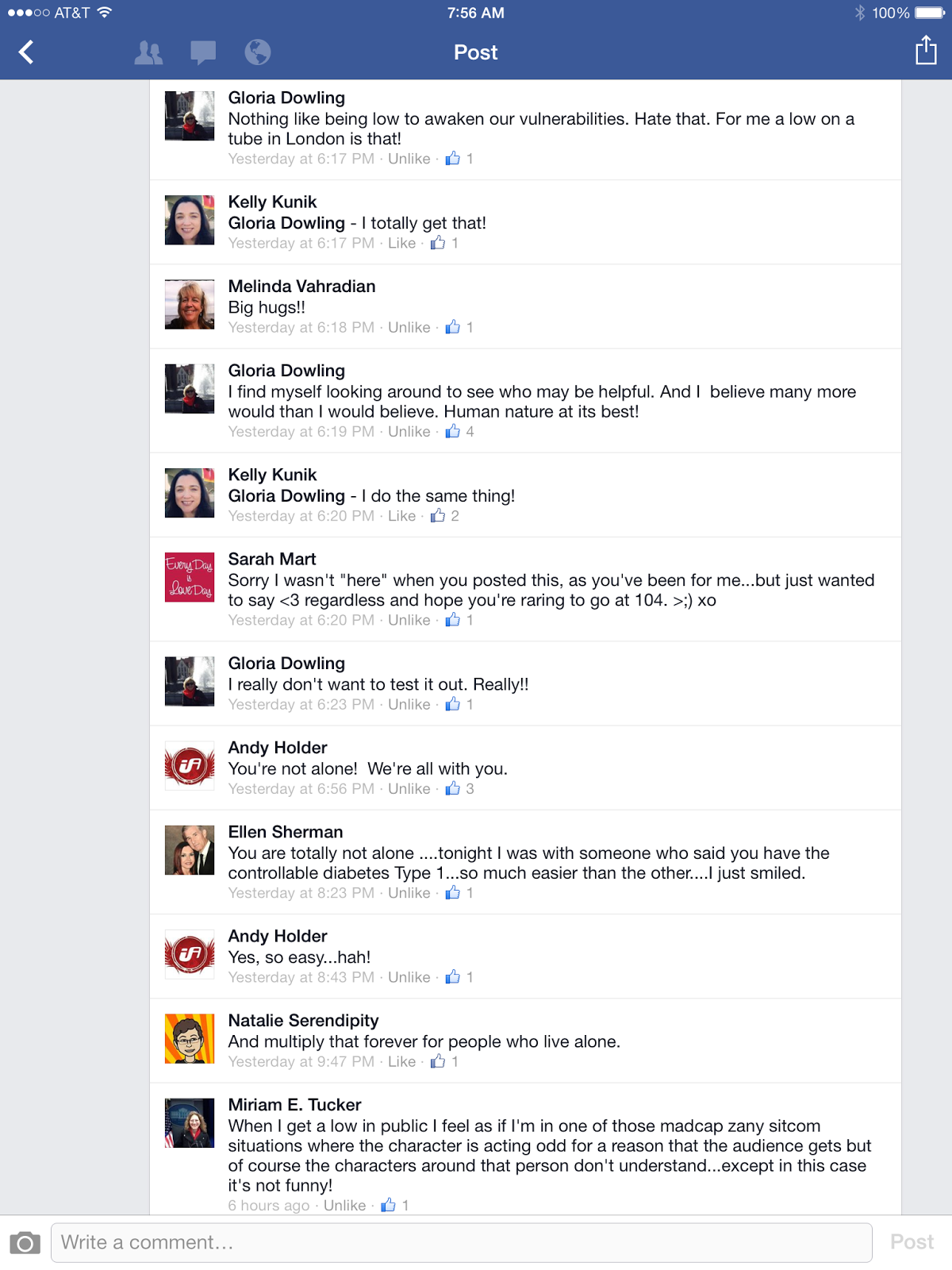 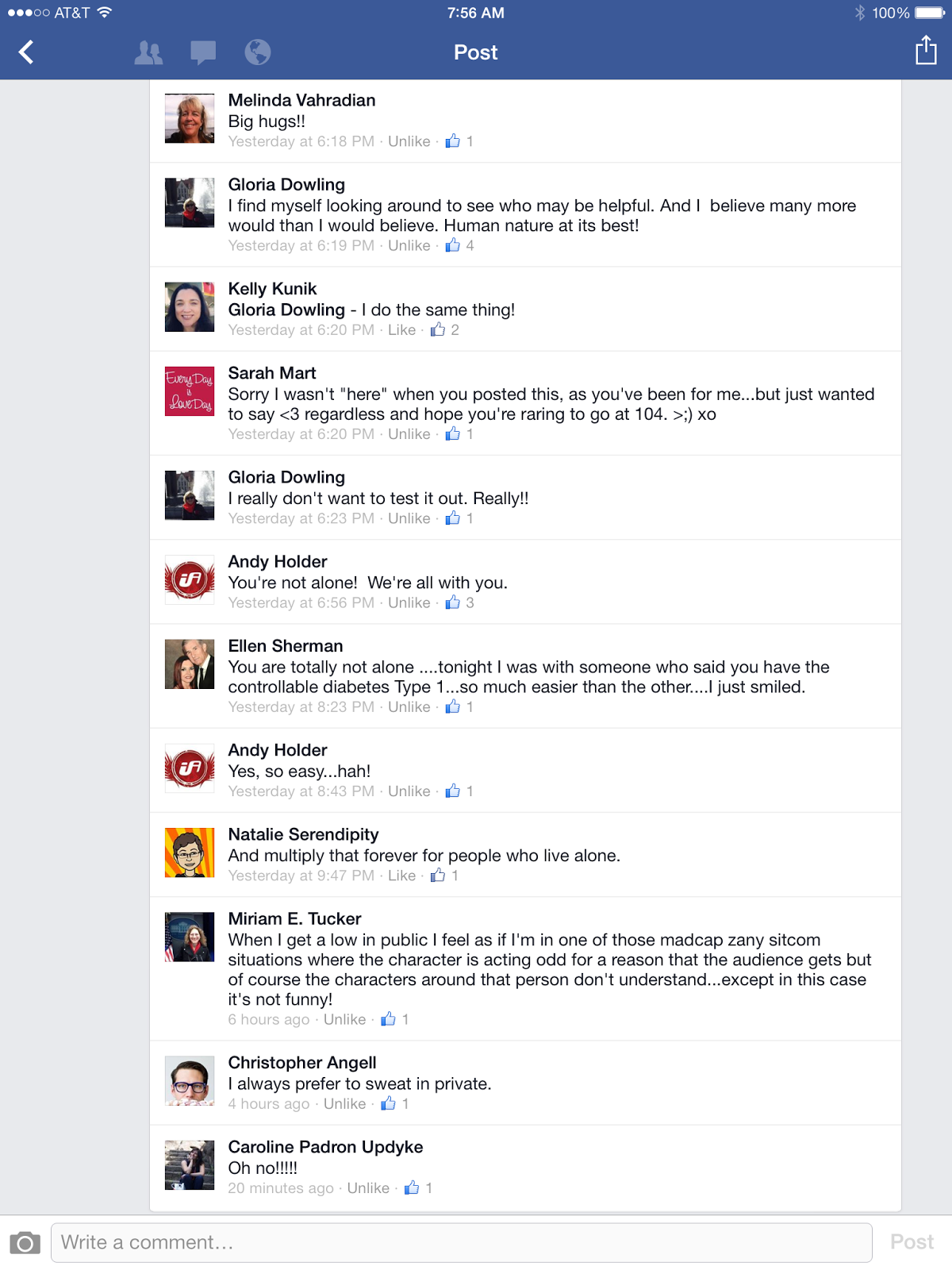 And people texted and dm'd me and I felt surrounded by others who "got it" and who were there for me even though I was sitting by myself.
And I realized I wasn't alone in spirit - And that made all the difference.
And in the end everything worked out.
The Blood Sugar Squall left much quieter than it arrived and things went back to normal.
I felt better - I still felt like I’d been kicked to the D curb - But I had been able to get back up and things could have been so much worse.
I tried working on the article I was supposed to be working on, but I ended up writing this post instead.
And then I went home and chilled.
Today is another day and a busy one.
And today, like everyday,  I am thankful for the Diabetes Online Community for always being there for me.
I am a lucky duck indeed~

I loved reading this and seeing so many people chime in to lend support. I had a low at the gym once and the noisy bustle of college girls in the changing room around me as I just sat there swooning was so unreal and lonely.

It's so good that you have so much support. I can't think of one person that I could call who'd really understand. I think I have to widen my friendship base. :)

Bad episode, great result. I love it when there's a happy ending.

So great to see wonderful examples like this of good people coming together. Thanks for sharing, K2!