My mom and or my dad would stand over a little tan pot with a dark brown handle filled with boiling water, one eye on the clock  & with these tongs in hand. 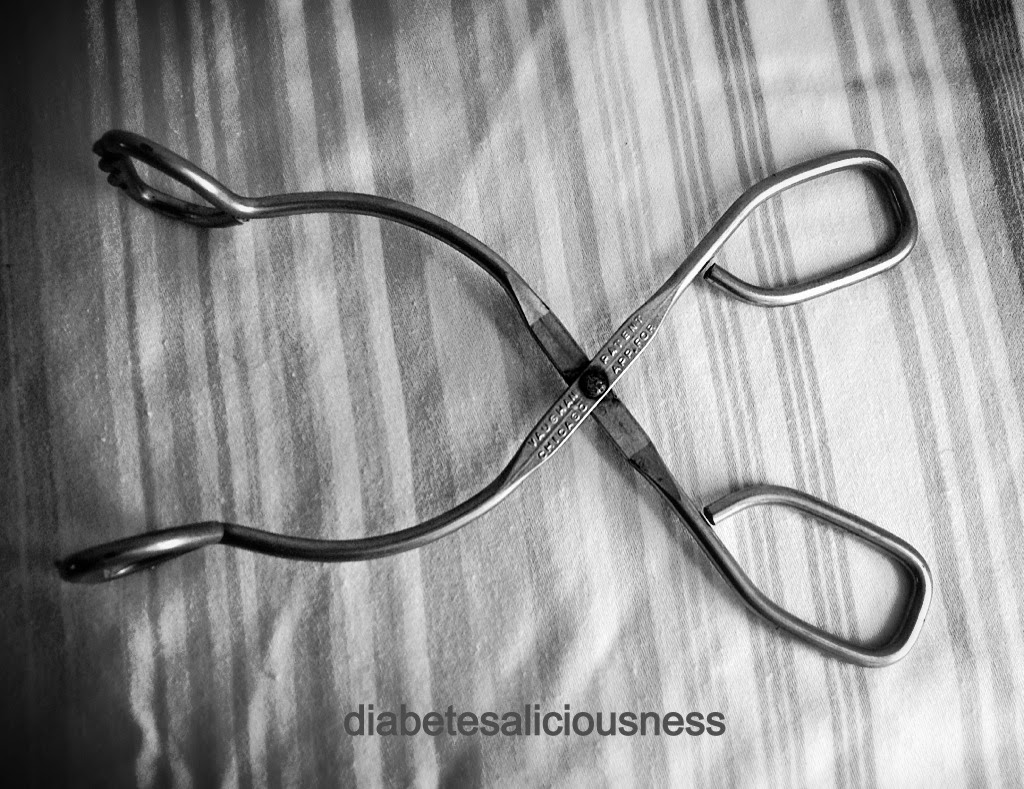 My folks were still in the habit of sterilizing needles, even though by the time I was diagnosed disposable needles had hit the market and were the norm. A throwback practice from the days when they only had two children with diabetes instead of three and needles were made of glass and sharpened with a stone slate .
And in some weird way I think they found the ritual comforting.
These were the very same tongs that after being washed, worked their magic flipping bacon for 6 children and two adults.

God, it's funny what you remember about growing up - And growing up with diabetes.

Today, these ancient tongs are still used every now and then - Like when my “real tongs” broke and lost their springiness while I was right in the middle of a veggie stir fry extravaganza. And they can still flip bacon like a badass and with chef like precision.
Mostly though, I keep them around for what and who they remind me of.
Also: These well worn tongs were the subject matter of a post from January of 2012 - Which I've reposted below in honor of #tbt - And the people who they remind me of every single time I look at them~
####

With three people with diabetes growing up in the house, (four if you count my oldest sister who got married when I was 4) things got pretty crazy, not to mention expensive.
And there were certain diabetes givens in the Kunik household
Like my dad kept his insulin in the butter compartment in the fridge in the utility room, while my sister and I kept our insulin in the fridge in the kitchen.
My dad used Lente as his long acting insulin and I used NPH - And I think my sister did too.
I remember my dad, Debbie and I always busting out needles before we ate our meals, right there at the table - no matter who was at the table. That was our diabetes reality and if you ate at the Kunik table, you were bound to see some hypodermics being injected before the main course.
I remember glasses of orange juice measured out perfectly to treat a lows and the the anxiousness in which we drank down that orange juice.
I remember Tab and Fresca and Diet Pineapple Fanta and diet Orange Shasta always being on hand - Same goes for Diet Pepsi.
I remember that when I was first diagnosed, I used Sweet N Low in my cereal, while my father used something called Sweeta - A liquid sweetner that I thought was heinous.
And those are just a few of the many diabetes memories that enter my clogged mind on a daily basis!

I also have these very vivid memories of my father (and my mother for that matter,) boiling our insulin needles over the stove in a tiny little tan pot with a brown handle - which is something they started doing way before I came to be.
Because back in the Diabetes Dark Ages, needles were made of glass and required boiling and sterilization before each use. So my parents spent of time pre Kelly boiling needles over the kitchen stove.
By the time I was diagnosed, needles were disposable and came in boxes filled with at least a hundred. But my dad still boiled mine to make them last longer, which taught me a few diabetes lessons early on. Lessons like:
My eight year old self would have major arguments with parents regarding boiled needles and how much they sucked.
And I remember my dad talking about the cost and then singing an intangible and entirely made up english version of O' Sole Mio in a mock yiddish accent while boiling the needles and waving the tongs around to make me laugh and get me off the subject.

Looking back now, I realize how much they had on their plate - And I’m still amazed at how they did it all.
And I’m reminded how far diabetes care has come - And how O' Sole Mio no longer applies~

Do you have any diabetes memories from growing up with diabetes?
Posted by k2 at 2:47 PM

Wow, thank you for sharing. Since I was only diagnosed almost 6 years ago I don't know much about the diabetes dark ages. It's good to read about how things were not even that long ago and despite how life is now with diabetes I really have technology and science to be thankful how far things have come.