Some generations remember where they were WWII started and ended, when Kennedy got shot.
For me, I remember where I was when I found out about The Challenger disaster, Princess Diana dying, JFK Jr's plane crashing,the Twin Towers falling and I will always remember where I was and what  I was doing when I first heard the news about Robin Williams.
I'm writing about Robin's passing today, not because I knew him, I didn't.
I never had the pleasure of meeting him, but I sure wish I had. Like many, I felt like I knew him a little bit, because I grew up watching him and laughing with him - And learning from him.
I'm writing about Robin Williams today because he made me laugh and learn and cry  - And I can't stop thinking about what happened to him and the reasons why he left this earth.
#########

I didn’t want to believe what I thought I’d just heard the Newscaster say and I was hoping with all my heart that I was wrong.
30 seconds into the closing of the CBS evening news and I was no long paying attention. Instead I was looking at my computer screen, not my television screen and reading my Facebook scroll, just because.
And then I thought I’d heard the announcer utter something along the lines of: There are unconfirmed reports on the death of beloved comedian Robin Williams, we’ll have more on this story as it develops.
And I yelled “NO,” outloud to my empty living room.
NO, It couldn’t be true. Not Robin Williams. Please not him, not the man who always made me laugh and cry and who fostered my love rainbow suspenders as a gangly not so cool grade school girl. NO, NO, NO.
I immediately googled the info and found several headings under the topic re: an internet hoax -  And I breathed a sigh of relief, until I clicked on Googles Search Tools bar and clicked on ‘Web’, and the sub heading, ‘Past Hour.’ That’s when I saw the coroners office Press Release from Marin County and the headline on Variety.com stating that he’d passed away.
Tears started to fall on my laptop and then and as if on cue, The CBS Evening News interrupted the first 10 minutes of Entertainment Tonight to officially report his death.
It was at the moment all the world’s hearts broke collectively and it was so effing palpable - You could feel the grief shock and awe across the bandwidth.
Millions of broken hearts sent their love to his family via social media - and shared their feelings of loss with one another - And that's still going on as I type this post.
I spent a lot of time last night reading Facebook and twitter posts that made me cry.
I couldn’t sleep last night for variety of reasons and I wish yesterday had never happened. 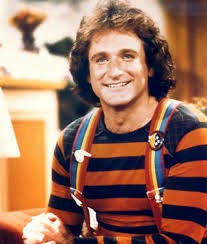 OK, maybe not the coolest fashion choice for today's tween, but as gangly 9 year old who was different both pancreatically and personality wise, Robin Williams made it absolutely acceptable for me to march to my own beat.
And his Rainbow suspenders became both the uniform and a badge of coolness for everyone, especially for those of us who were decidedly different.
And Robin Williams was the man that my parents (who had 43 & 49 years, respectively to my 9,) and I would watch together  - And he'd have us howling, together as family. That was BIG.
He made our family laugh, especially during those times when we wanted to cry - And he made us laugh until we cried.
From all accounts, Robin Williams was even more kind than he was funny.
Think about that for a second - He was incredibly gifted when it came to comedy and drama for that matter, but his many acts of kindness were just as legendary and endearing.
This “character,” was an extraordinary and compassionate man who had a wonderful character.
Robin Williams struggled with depression and addiction and was open regarding his struggles with both in interviews.
For one brief moment on August 11th, depression won out and Robin Williams took his own life.
I hate it - I hate that it happened - I hate that his depression won.
I hope he's found peace and I'm hoping and praying for his family and I will continue to do so for a very long time.
And I hope (and I know my use of the word "hope" is redundant, but it's the only word that fits and I'm all for holding on to hope,) that his struggle will shine the spotlight and remove the stigma of this terrible disease called Depression.
Depression isn’t a character flaw or a weakness.
Depression is a very real disease and is both genetic and generational, much like diabetes and heart disease.
Depression manifests itself both physically and mentally and it’s tendrils reach out and hurt every single person it touches.

As a Kunik, I understand what depression can do.
I’ve dealt with depression and I’ve lost loved ones to depression.
Depression can pull you down so deep that you believe that you’ll never be able to get up.  Here's the thing: #Depressionlies.
You will be able to get back up.
But you will need up.
Asking for help is really hard and it's really fucking brave and wonderful and it’s OK.
So go ahead and ask for help.
If someone you love (or know in passing for that matter,) suffers from depression, is showing signs of depression, or has put up a wall between the world and themselves as of late, please reach out to them.
And if you suffer from depression and are in place that’s not good, PLEASE reach out to  someone you love and trust, or call the National Suicide Prevention Hotline at 1-800-273-TALK (8255) and ask for help.
The world is such a better place with you in.

I'm doing my best to be kinder today on many levels.
To check in on friends, to work and be patient and let things go that aren't important.
Tonight I will be watching some Robin Williams movies that will remind me of all the wonderful lessons he taught all of us over the years - And I will do my best to take his words to heart and put them into action~
Posted by k2 at 3:11 PM

Email ThisBlogThis!Share to TwitterShare to FacebookShare to Pinterest
Labels: depression

I think that many people still can´t grasp on the fact that this wonderful actor had such a tremendous issue and that it will thankfully, make them think about what depression truly is, and for that much I am grateful...but the more I think about it, the more it hurts to know, how much joy he gave the world, and how little it could be given back to him

Getting help is so hard, it took me a lot to go to therapy but now I´m feeling much better and to think that a wonderful man like him, was so submerged in pain and sadness that he took his own life breaks my heart.
I wish that the joy we can give others, could be bottled and given to us for the dark days...he would´ve had so many to help him get through this.

I just cannot believe he is gone and took his own life. He was such an amazing actor. Thank you for writing this about him, I hope his family sees it somehow.

Kelly, that's about as fitting a eulogy as I can imagine for a wonderful talent gone too soon. I just couldn't bring myself to write anything about it today. I'm glad you did.

As much as his passing saddens me, I do hope that some good can come of it. Namely, the discussion on mental illness. I'm not naive enough to think that the stigma will suddenly be lifted, but I do hope that an open discourse will help save others from a similar fate. I pray that he has found peace and love in whatever afterlife he believes in, and I pray for peace and love for his family in this difficult time.