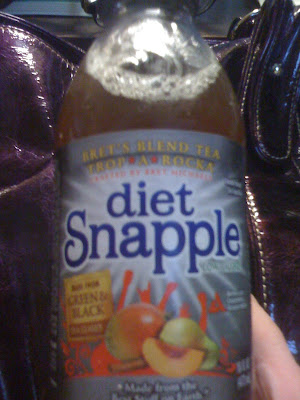 Photo courtesy of my iPhone
Better late then never.....I GUESS.
After weeks (which turned into months) of searching, I finally found Brett Michael's Snapple/Celebrity Apprentice Bret's Blend Trop-A- Rocka Diet Iced Tea a few weeks back and I'm just getting around to blogging about it today.
I couldn't find the tea to save my life! And that was both frustrating and annoying- I wanted to try it and I wanted (and was willing) to give my money to a diabetes charity, so why couldn't more stores carry the damn flavor!
Seriously, I Checked Snapple's Website Locator, I checked (many would say bothered) with store managers, and NO LUCK.
Many stores had the Compassion Berry Tea, and I'll just go ahead and answer my own question re: the lack of product/
Everyone who has ever had to by diet anything knows that most stores Diet Iced Tea/soda selection is limited to begin with, hence the reason finding the Trop-A-Rocka tea was damn next to impossible - at least for me.
I finally found the flavor at two different WaWa convenience stores. One in South Philly and one in South Jersey.
And you know, it wasn't bad -It was actually pretty good. OK, I'll admit it, I LIKED IT.
Now if more stores would actually carry the flavor, maybe more money could be raised for The American Diabetes Association.
Personally, I 'd like to see all moneys raised go towards research for the cure and for implementing more ADA activities for adults and children with type 1- but that's how I roll.
So my questions for you are:
1. Have you tried the tea?
2. Did you had any problems finding the tea?
3. How would you like The American Diabetes Association spend the money generated by the sale of the tea?
Posted by k2 at 12:15 PM

1. No
2. Can't find it - anywhere in Northern CA (surprising right!?!)
3. They should spend it on a cure, yes, and the "artificial pancreas" project.

(I think you, me, and the DOC can put together the adult support stuff...) :)

1. Have you tried the tea? No!! :(
2. Did you had any problems finding the tea? Yes!!! I've looked and looked at all the stores in my area that supposedly carry it, according to the Snapple web-site. But I still haven't found it yet. :( :(
3. How would you like The American Diabetes Association spend the money generated by the sale of the tea? I would love to see it spent toward research for a cure.

1) yup, liked it!
2) i actually was very surprised to find it in a wawa in west philly. i've only seen it at one other wawa (university city...about 2 blocks away).
3) i think the ADA already does a fair amount of research, so continuing to fund that research would be good.

1. Yes. I love it!
2. I *still* haven't found any in Virginia. I had to go up to my hometown in Central PA. One of the beer distributors was selling it by the case. I bought 3.
3. Personally I think the money should all go to the ADA camp fund because that's was Bret was actually playing for on the show. And I'm a bit partial to that cause. :)

1. I liked it too.
2. I found it at Wal-Mart (for shame!) in a 6-pack. Haven't found it anywhere to buy individually yet.
3. Saying I'd like to see the $$$ go towards a cure is a given. We all want that. However, the realist in me knows it's going to take a lot more than a diet drink to get us there. I think it would be effective, given the publicity, to ride the momentum and use the funds to spin off a national ADA diabetes awareness campaign, and have Brett as the spokesperson.

1. Yes - didn't like it much. Flavor is strange. I much prefer Snapple's Diet Peach Iced Tea.
2. I am from Toronto, Canada where I have not seen the product, however, on my recent visit to Miami I got the drink from Target.
3. Research, research, research for a cure and improving technology!!

Hmm, I hadn't gone looking for it, but now that I know where I might find it, I will! Thanks for letting me know where to look for it :)

I live in Northern California and I have found it at a few places. (CVS being one of them.) I have bought it, and given it to a neighbor because I don't drink Iced tea. But I had to represent!

1. Yes. I thought it was pretty good as well--kudos to Bret for insisting on a diet Snapple!
2. No, it was in the local Safeway the day after the last show.
3. As others said it should go to the camps for kids. That is also one of the few things I think the ADA spends $ wisely on.

Sadly, I've read elsewhere the flavor is no longer available & Snapple has no plans to bring it back. Boo! ):-(

1. No and not for lack of trying...
2. 4 , count em 4 Wawas near me and nothing. What's up with that???
3. Artificial pancreas project and while I would say put it into a cure, I would rather see it go towards D-camps for kids and teens.
Grace returned from her (see my latest post) and she LOVED it Kel!

Yes and we liked it.
Yes.
And I don't have any suggestions. I love that Bret supports the D camps though.

For anyone who works in lower Manhattan, NYC, I've found this tea at the Variety Deli & Cafe http://tinyurl.com/varietynyc but they don't always refill it quickly, so if it's gone, you have to check back a few days later when Snapple comes by to replenish their supply.