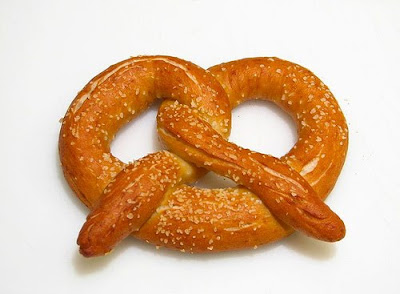 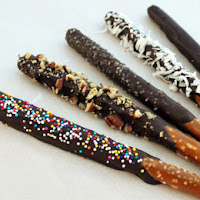 As a rule, I don’t purchase pretzels of any kind.

Yes, I‘ve said sayonara to the matchsticks; so long to the Philly softs, and adios to all varieties of Snyder's of Hanover. And as long as I'm being honest, I haven’t stopped by to visit Auntie Anne in ages - I’m a terrible niece!

It’s not that I’m morally against pretzels, because I’m not. As a matter of fact, some of my fondest food memories involve pretzels.

When I was very little girl and it was time to buy new school shoes, my mother would take me to Fischer’s Shoes in Margate. It was in that very store that I began my love affair with footwear and my appreciation for pretzels. After deciding on my new school shoes (which literally took hours), Mr. Fischer himself would give me (and every other kid) a pretzel rod with mustard.

New shoes and a pretzel with mustard, who could ask for anything more?

When I was young, my sister Debbie introduced me to the epicurean delight of Philadelphia Cream Cheese smeared on top of a Snyder’s Sour Dough Hard Pretzel - DELICIOUS.

When I was in High School, Auntie Anne's Pretzels became an integral part of my teenage mall experience.

After I graduated college and went to Europe, I was introduced to Nutella’s magic and brought a jar home with me. It was then that I discovered the shear joy of dipping a matchstick pretzel in Nutella and peanut butter – it was literally the pretzel version of heaven!

Don’t even get me started on the delights of dark chocolate covered pretzels made with sprinkles & coconut. And those Utz’s Extra Darks – they have the ability to ROCK my world and always leave me wanting more.

But for some reason, pretzels HATE ME, which sucks, because I love them. It’s a textbook example of a love/hate relationship.

Pretzels require a lot of work and attention (at least on my part), not to mention a hell of a huge bolus for a minuscule serving size.

And I always want more than the serving size suggests and almost always end up eating more than I should.

But on occasion I indulge, especially if I’m on the beach and my friend brings them for her kids. But even then, I make sure I swim and test a lot to counter act the uber carbs.

And even with all the work it’s still a diabetes crapshoot! I'm left either feeling fantastical or horrific- and always wanting more.

What foods have you said “Sayonara” to and why, and on what occasions do you indulge and say "screw it?"

And PLEASE don't let me be the only one with forbidden food desire, because right about now, I’m feeling a pretty silly about my pretzel lust.

ACK! cinnamon raisin bread! Oh how I love it but I never buy it ever. I can never have just one slice! thank you so very much for putting the thought in my head now! :)

You absolutely are not the only one. Sad but true, I've had to say good-bye to oatmeal. So warm, so soothing, so much havoc on my blood sugar. Yes, even the steel-cut kind. :( *sigh*

As long as we're on the topic of pretzels...pretzel sticks and hot fries are a favorite of mine...I hate counting out each stick so that I know exactly how many carbs I'm getting...

Breakfast cereal. Of any sort. Even the healthy stuff! My BG spikes like Iceman in Top Gun.

I haven't completely sworn it off, but I don't eat a lot of fruit anymore, unless it's coupled with serious activity. My BG's skyrocket after something as as simple as an apple, banana, orange, or grapes. Breakfast just isn't the same without orange juice or apple juice, but I've learned to make it work. Diet Coke (read, caffeine) goes a long way.

Cold cereal. I am not a breakfast person and cold cereal has always been the only thing I could stomach in the morning but those days are gone. I blame pregnancy because I was fine before I started having kids. If I'm low in the middle of the night I indulge in an extra large bowl of cereal - whatever we have on hand for the kids.
Tristan

Kel - this post made me cry because my gal G wants a soft pretzel so badly and I don't buy them anymore. They sell them every Wed. at her school and I say no. Last time she had one, she skyrocketed to the 300's and stayed there for hours. It makes me sad for her cause on every street corner, as you know, there is a soft pretzel place. I miss them.

I thought I was the only one in the world who put cream cheese on hard pretzels. Sigh, I'm not the only one.

So, no more soft pretzels around here anymore and no more cotton candy on the boards...

Hm... liquorice juice! (as in the black candy?) I always end up eating to much and even though I bolus the right amount for the carbs I always plumit down in the end >.<

Pizza. Not matter how much I bolus I am always high after. And I love me some pizza.

Cold breakfast cereal. Not even the really bad stuff either, though I do miss my Golden Grahams and Life. I'd love to be able to have some Corn Chex or Cheerios. Nope.

Pancakes. Even without syrup, even buckwheat, even accompanied by protein of some kind, no good.

Or pretzels for that matter ;).

White rice. The devil of all carbs. I'm pretty good about eating brown rice (because let's face it, I'm Asian...there's no way in hell I'm getting rid of rice in my diet), but sometimes white rice just sucker punches me.

BTW, my CAPTCHA for this post is "recalc." As in, recalc your bolus for pretzels and other goodies :P

Oh so good and oh so bad. I have quit both, but will indulge once in a great while to reward myself for a hard workout or a race. I also celebrate my D-Day (I think others call it diaversary?) by indulging in those non-D things.

I had to break up with pita chips.

I just can't eat anything white. It all makes blood sugars difficult for me to control. Oh, except ice cream :) Thank God

If I had to name one food which was the worst for me, it would be cereal. If I wanna be up over 300 that's the way to do it. So it doesn't ever step foot in my house.

Peanut Butter. Mostly because I can never eat a little bit of it. I don't even buy it anymore. I can wolf down a whole jar in approximately 3.2 seconds. Just kidding. Not that fast. But it's lasting, negative effects on my BG (sometimes 2 days later) drive me crazy. Now I want a big ol' spoonful...

I guess there are a number of things that I know are problematic, but I just try to do the small serving rule, and don't think of them as off-limits. Chinese, pizza, pasta, Indian are the ones that come to mind.

As far as pretzels go, I love soft pretzels, but hard pretzels don't do anything for me. Auntie Anne's cinnamon sugar pretzels are absolutely decadent, but I almost never eat them. As good as they are, they're more trouble than they're worth. If they had kiddie-sized ones, I'd go to the mall just to get one though :)

Pizza! and bananas... Generally I just avoid carbs, but can eat in moderation. Pizza however, is evil. I just look at Pizza and my BG spikes and stays high for days! And bananas are bad for me too. And I crave both all the time!

Man! I had a conversation with someone today about how I can just NOT keep chips or crackers in my house. Oh, cripsy, salty carbs!!! i do indulge sometimes, but if I had them in my own home it would over...

Bagels. I'm talking about crispy on the outside, chewy on the inside, maybe sesame, maybe plain, maybe with lox and cream cheese. I just can't. And can't eat anything really white anyway. Just not worth it. And I've given up caffeine. If I ever had coffee or a diet coke without food to bolus with, hello 250. But I like the idea of splurging on my d-day.

Pizza for sure. Just can not do it correctly. My CDE at Joslin told me that in 29 years of work she has met ONE diabetic who can eat pizza with ease...Sigh.

French fries for me. I forget on occasion, order them and always regret it. To save me from this fate, T3 will order them and let me have 2 off his plate I get a taste without the BG excursion.

I had given up cold cereal without realizing it. Last week I bought some Kashi Go Lean Crunch, thinking it would be better than most. It, with a peach and skim milk this am, sent my BG soaring. Back to the old fashioned oatmeal for me!