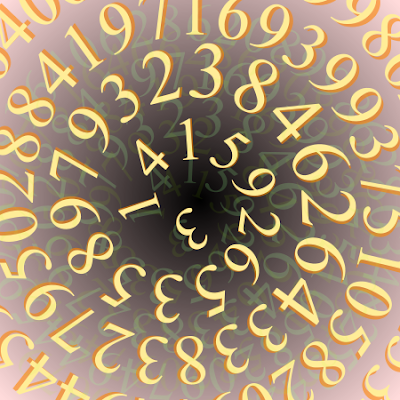 There are all sorts of numbers in our diabetes world.

But there are other numbers related to diabetes as well.

Here are a few numbers that personally represent my diabetes life.

Number of injections given: This is tricky because now I’m on the pump and when I was on multiple daily injections, the rates varied. So, I need to get back to you on this one.

1418: Number of infusion sites I’ve used in my pump wearing life: Here’s how the breakdown - And please keep in mind I was a Litt major in college.

Take into account the number of unexpected doorknob infusion set extractions, which I’m guesstamating to be somewhere around 100.

Remember to take into account the number of infusion that was actually on a dead spot. Because of the “dead” factor, those sites absolutely refused to absorb insulin and needed to be replaced. Let’s say…100 + 1268 = 1368.

Now, add the number of infusion sets that for some reason didn’t stick properly due to inadvertently folding sticky part of infusion set and had to be replaced with in 1 day. Lets say…... Lets say…. 50. Final Grand Total: 1418.

792: number of insulin bottles used in the last 33 years. This not number doesn't include the the insulin bottles that broke and had to be replaced - Because I have no idea what that number actually is. But I do know that the broken insulin bottle phenomenon usually occurs when you don't have another bottle of insulin on hand.

300: Estimated number of times someone has asked me if my insulin pump was a beeper.

3: number of times I’ve worn my insulin pump in my bra. Seriously, I don’t have the boob ratio to get away with that.

2: number of times in 8 years I went to work and forgot my insulin pump at home.

1: Number of times I left my insulin pump at my chiropractors office and went home without it after an adjustment.

10ish: Number of times I forgot my meter at home and didn’t have a spare.

2: Number of times my meter case was stolen because some thief thought it was a wallet.

I’m not kidding. It happen once at a bar when my hand bag and the contents spilled out, and once at a coffee shop on Walnut Street where some dude took swiped it off the table I was sitting at. But the joke was on them!!

????????: Number of carbs I’ve bolused for in my diabetes: OK, there’s no fucking way I can figure that number out! NEXT configuration

35 – 65: Number of carbs in a boutique cupcake. Carb configurations are based on the size and icing ratio of said cupcake.

IN THE THOUSANDS: Number of times I’ve uttered the term “ I’M HIGH” in public when referring to my blood sugar.

IN THE MILLIONS : Number of Diabetes Police in the world

ENOUGH TO PURCHASE A GINORMOUS BEACH HOUSE & NOT HAVE A MORTGAGE: MONEY spent on living a diabetes life.

OK, I can’t do anymore Diabetes Math, because my head really hurts.

Oh, how I can relate to those numbers- well, mine are a lot less since I've only had it for 5 years, but oh man, I just smiled so big when I read about where you have only worn your insulin pump 3 times.

My ratio is quite small too, and when I clip my pump to the middle, it sticks out farther than my girls so it looks like I have a 3rd larger, rectangular boob. Yeah, unless I'm in a baggy sweatshirt, it's not going to happen for me. :)

1000x - that's how much we adore you!
1 - little girl who thinks you are the bee's knees )I am sure there are more throughout the D-asphere)
3 - miles we walked together this year, talking and laughing about D
10 - long minutes we waited for the potty!!!
1 - there's only one YOU, fabulous Kelly!

Number of finger sticks is another big one!

Number of highs caused by kinked set is one that gets to me too.

Umm, shouldn't you have added the doorknob-extraction replacements to your total, rather than subtracting?

(OK, I've just outed myself as a major geek to those that didn't already have that figured out).

The one my kids were counting the other day is the number of times they've bent the pen needle on their leg. I was suprised to find out is was quite often. (they don't pump)

I always wondered if someone would think the bags were purses and try to take them. Now I know! Thanks K2!

Like Lindsay said, I just giggled about the number of times you've worn your insulin pump in your bra....I also do not have the boob ratio for that either...unless I want to have a 3rd larger rectangular boob too!

I'm so dreading the days when my daughter is tall enough for the tubing to reach a doorknob. We just have 'kids racing around like a bunch of idiots in the back yard,' 'pretend WWE wrestling with brother' and 'the dog pulled my tube again, Mom!' around here.

Excellent post. I usually run the numbers on the diagnosis anniversary and I'm always stunned at how quickly they add up...

0 - number of nights I've slept through the night since dx.

1 - number of test strips that I've found in my underwear!

About 150, number of DOC friends that I have.

Maybe 500, number of rage boluses I've made when I had a stubborn high that wouldn't come down.

About 1,000, number of times I've had to stop some type of exercising because my blood sugar is too low.

Maybe 12, number of events I've done to raise funds for diabetes, including ADA and Dr. Faustman.

And the worst about 500 and counting, number of times I'd had to stop playing with the kids for the same reason.

This post plus all of the comments left for you made me smile from ear to ear. You have no idea how much i needed to smile tonight. Thank you!

That was SO great! It made me LOL! It's nice to give people a little perspective of what it's like to be responsible for being a pancreas! Thanks for sharing!