My trek to JDRF's Government Day in DC started with me finding a seat on the Acela train from Philadelphia to our nation’s capital – And unbeknownst to me, the seat I found was on the quiet car.

My train was delayed ½ way to DC by a 190-car freight train pile up. We waited over an hour while engineers on the track checked each of the 190 cars on the freight train to make sure everything was OK.

Kerri over at SUM seemed to be having a similar train frustrations and via twitter, we agreed to meet- up at The Crumbs Bakeshop @ Union Station & share a cab to the hotel in Arlington.

Around 3ish, we met up at CRUMBS, grabbed some cupcakes (including a carrot cc for Cherise, who had been dreaming of CRUMBS all week) and finally found our way to the cab stable, and grabbed our “confessional cab” (keep in mind, neither of us had actually talked to anyone we knew for HOURS) for the 20 minute ride to Arlington.

We met up with the other bloggers in the bar, spent a good amount of time hugging one another and then we each made our way to our rooms & got dressed for the Awards dinner.

That night we went to the Awards /cocktail hour & dinner honoring JDRF Advocates from around the county who spend massive amounts of time and effort planning, coordinating, & executing JDRF fundraising efforts in their communities. The majority are volunteer & almost all have are directly related to diabetes via a family member.

The Bloggers sat together, and that’s where I had the chance to finally meet Hallie from The Princess & The Pump – And you know what? She’s WONDERFUL.

The next morning began with a 7 am breakfast (and yes,daylight savings time had just kicked in about 5 hours earlier) immediately followed by sessions on JDRF Government Relations.

Before the sessions officially started, every person in the room got up and told their diabetes story, and I have be honest, listening to everyones stories made me cry.

OK, it made more than cry, I damn near sobbed. But listening to those stories reinforced the fact that diabetes touches everyone, not just those who have diabetes. I sat in a ballroom filled with parents, grandparents, and siblings of type 1’s. And there were many adults with type 1 as well. Every story made me cry, some made laugh, and each inspired me to continue advocating.

The sessions that followed the introductions were all about having successful Hill visits.

Now, for those of you who don’t know, JDRF hit’s the lawmakers on Capital Hill for a solid two days every year regarding Diabetes. As in living with diabetes & funding for Diabetes research. This year The JDRF was asking lawmakers for their continued support on diabetes based research & technology.

With the economy being the way it is, The House wants to make cuts (BIG CUTS,) to the tune of 1.6 billion in NIH funding & 241 million cuts to the FDA. These cuts directly affect diabetes research, BIG TIME. I'm asking you - regardless of what side of the fence your on, to call your lawmakers up and tell them you won't support them if they support these cuts!

This year, JDRF was asking the the politicians in each state to sign a letter to FDA Commissioner Hamburg supporting The Artificial Pancreas Project and taking it to the next step- Out of the clinical setting and into a real life clinical trial settings.

Diabetes is a technology based disease, and if we can't get the funding for the technology, and can’t get the technology pushed through the inertia that is the FDA, we pay the price as PWDs (people with diabetes), both literally and figuratively with our health. 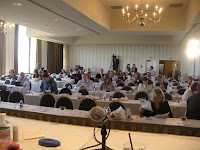 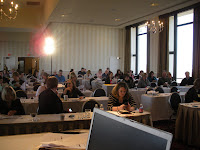 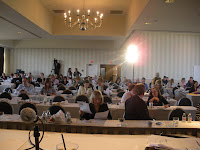 The Blogger Panel P.O.V: About 7 minutes before we began!

After Lunch, the Blogger Roundtable discussion took place – And it was honor to be a part of such a wonderful group. I really felt that talking about growing up with diabetes/living with diabetes as an adult, helped the parents in the room get a different perspective of things – And vice versa.

I know that every blogger in each of the roundtable discussions felt that we were representing the DOC and we wanted to make you guys proud!

I was in group 1 and I have to say, our audience really got into the discussion, as did the folks watching on ustream!

After the Roundtable discussion, I went up to my room and freshened up before dinner.

As I walked back to meet the bloggers, I saw Cherise and I said: Hey, I’m looking for you!

And a man who was walking slightly askew to her left said: I’ve been looking for you too!

Man: Yeah, I’ve been looking for you – I really need to talk to you. Just for a few minutes.

Man: I was in the Ballroom at the Blogger roundtable. You know what you said about kids with diabetes always saying “I’m sorry….” And then growing into adults who always say, “I’m sorry?” because they feel so guilty regarding their blood sugars?

Man: Well… It just really made me realize…. how many times my son has said "I'm sorry" to me. I was so upset about his blood sugar that… that…I wasn’t mad at him…. I was just so scared… But I know it sounded like, like I was mad at him – And I wasn’t … and now I feel so bad…

And at that point we both started crying, and we hugged one another and I told him it was OK and that he was a great dad and that being a parent of a child with diabetes is a tough job!

And then we both took a few minutes and got our game faces on and walked into the cocktail hour together – And we both had a better understanding of what it was like to walk in one another’s shoes - And I'm so grateful for that.

FYI: Thursday Blog is all about Sunday’s Dinner, the bloggers meeting the new JDRF President & CEO Jeffrey Brewer & Talking with “The Hillers” about the good, the bad, and the diabetesalicious of it all.

Disclosure: The JDRF paid for my travel, some of my meals and expenses. I wasn't asked to blog about my experience, nor did they tell me what I could or couldn't say. Like it or not, what I wrote and will continue to write are my thoughts, from my own diabetesalicious brain.

It all sounds so very marvelous Kel! Thank YOU for sharing your story and for enlightening everyone about growing up with D. I have learned so much from you and you continue to inspire me with your knowledge, your advocacy and your diabetesalicious awesomeness!

It's wonderful to read about Government Day.

I watched the Ustream video of the roundtable, and the "I'm sorry" part really got to me, too. I think now I'll be more cognizant of "I'm sorry" words, expressions, body language and so on...which is a good thing! It's great to get your perspective.

Awww! I think you're wonderful, too!!

But dang it- you made me cry again!!! I remember when you said that about being sorry.... And it was all I could do to choke back the sobs. And here I am cryinf again!! I'm someone that feels guilty about a lot... And to think that Sweets would feel that way... It breaks my heart. I don't know what to do to keep her from feeling that way. Any advice? I'd walk thru fire for my girl... I just want her happy and healthy- physically and emotionally.

Honesty Hallie -
You do a great job! I know Miss Sweepea is going to be just fine! My only advice is to keep your game face on regarding high numbers. I know high numbers are upsetting, but really keep in mind that
there are no "bad" numbers - knowing what our blood sugars are means that we know what direction we need to go towards.
Blood sugars are a map, a compass, and a GPS all rolled into one.
As long as Sweetpea knows that, she'll do just fine and the lines of blood sugar communication will stay open.
But unfortunately, your still going to have to worry about Miss Sweetpea's love of accessories and clothes and how much that will cost you over the next 15 years - SHE IS ONE STYLING PRINCESS!

Kelly, I have to tell you that your comments about being sorry for everything pretty much crushed me, too. I wanted to tell you that you should not feel sorry for ANYTHING! I came home and discussed it with my son (and cried, not him, just me) and I told him I don't want anyone with diabetes to feel like that. I'm sure he has felt it and I'M SORRY for that! I wish I could have been brave and told you this in DC. This disease is hard enough to manage without lumping a bunch of guilt on top of it. You do a great job of raising all kinds of awareness.

And yes.... I have a feeling she's gonna cost us a lot - for many years!! The clothes, bows, socks, purses, jewelry, shoes.... It is fun! The kid definitely has her own sense of style and attitude!! I love it!!

Jill -
Your VERY brave! You talked to your son about it and that's just awesome!!!
Thanks for your kind words and being such a great parent!