So, back in the beginning of February I was contacted by someone at SELF Magazine, asking me to answer a series of questions regarding my life as a Diabetes Blogger/Diabetes Advocate. Turns out a friend (who I have mentioned in past posts - think CHIABETIC,) had submitted information about me and my on-line life, and I was being considered for their "Be SELFless" column in the April edition of SELF.
Since I'm more about being SELF deprecating and flipping my inner diabetes bitchswitch whenever needed, I thought it was kind of a cool opportunity.
A series of interview questions went back and forth (we're talking like 3 pages worth,) over the net. Then, as quickly as the emails started, they stopped and I didn't hear anymore about it and I thought, OK, they went with someone else.
Cut to the third week in February, when I received an email from SELF saying they had decided to run with my story and needed pictures.
I sent them some pics and asked if I could read what they wrote, but apparently, that's not how it works - which I already knew- but me being me, I had to ask anyway.
I was nervous, I wasn't used to NOT having control over my diabetes on-line indevors.
What if I sounded like an idiot?
Cut to last Tuesday when I was at Hudson News at Union Station in DC, perusing through the magazine isle and saw The April Edition of SELF with Kim Kardashian on the cover -YES, God does indeed have a sense of humor.
I flipped through the pages and found the Be SELFless Column in the lower hand corner of the page -And there was my picture, with Grace of my heart from A Sweet Grace. Big SHOUT OUT to Penny, Author of A Sweet Grace & (Grace's mom,) for allowing me to use the picture:THANKS, PENNY! And accompanying the picture was a paragraph. 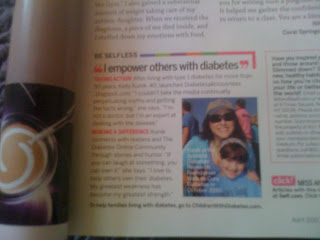 Kelly & Grace in SELF Mag
And I noticed:
A. The DOC (Diabetes On-Line Community) was mentioned - YAY!
B. My quote "I'm not a Dr., but I'm an expert at dealing with diabetes 24X7, 365 days a year, without time off for good behavior," had been cut in 1/2 and was written as: I'm not a Dr., but I'm an expert at dealing with the disease." AND YES, that made me nervous.
C. Gracie look great!
But still, I was happy for the most part, even if I had qualms about sounding like a Diva.
Here's the thing, as big of a loud mouth as I am, I worry A LOT - about the good,the bad and the diabetesalicious of it ALL.
Cut to Monday night, when the news hit twitter - And again - I WAS NERVOUS -We're talking downing Maaloxx & tums type of nervous!
Cut to yesterday, when I started getting emails from people with diabetes looking for on-line support!
You know what? I am so incredibly grateful for the interview opportunity with SELF- even if it meant giving up control to the unknown. WHY? Because people who needed to find the Diabetes On-line Community started contacting me and asking where they could go to find support & friendship. And as we all know, finding the DOC is wonderful thing! And I'll do whatever I can to help spread the word!
Posted by k2 at 11:33 AM

Well done! I can imagine that must've been really quite anxiety provoking but i am glad you were happy with the article, and you deserved to be in there, you should be proud of yourself xox

This is exactly how we bring the DOC offline to those who need it! So proud to know you! :)

I just got chills!!!! So happy people now have someone to reach out to!!!

And that's exactly why you were on the ledge, cause people needed you there, people who needed people in the DOC. You are fantastic Kel, you are awesome in your diabetesalicious ways and it's such an honor for Grace to be pictured with you. Thank you, for everything hon. Honestly.

I'm fairly new to the DOC...at least from the actual "blogging" perspective (I've lurked for a few years until recently)...so glad there is a DOC and that I was able to find it! And can I just say, You Rock!!!!

I will be going out and buying it now, seriously.

Honored to know you, and Grace what a beauty!!

way to go, kelly! that's fantastic that people are reaching out to you! i wish there was some way to let everyone know about the DOC! they couldn't have picked a better person! :)

Every opportunity is a chance to educate. The article was great & I'm proud to call you a friend. :) p.s. I totally showed it of to my co-workers. They think it's cool too.

Very cool! And how great that Grace is in the pic with you... love it!

So wonderful for so many people who didn't even know there was a DOC. Way to go K2!

Woo Hoo!!! The DOC IS a wonderful thing! And you BOTH looked great!!