TSA As A Diabetes Brain Trust? I THINK NOT!

Once again the Diabetes Brain Trust that is the TSA has made travel for PWDs (people with diabetes) less then pleasant and more dangerous than ever.
On Friday, January 27th TSA actually thought a woman with an insulin pump who'd gone through their advanced imaging technology thought her robot pancreas was a gun!
Apparently, TSA thought the woman's insulin pump resembled something in the firearms category.
At least that's how TSA Agent interpreted the 'image' on the screen.
REALLY???
According to the story, there was some confusion because she didn't hear the agents asking her to stop and step aside.
So TSA called the police, the woman's flight was delayed while they searched retrieved, and detained both the woman and her offending electronic pancreas.
Now we all know the mayhem that is makes up the airport security lines.
And we all know that airport security isn't exactly diabetes friendly
But even with all the confusion of security lines,searches and electronic devices - I don't know what planet you have to be from to confuse an insulin pump for a gun and or firearm!
So here's the Cliff Notes version that TSA might want to keep on file re: insulin pumps and what they look like.
Please keep in mind it's not a dissertation on insulin pumps, nor is it a chapter book.
It's more like a short series of pictures with short descriptive sentences - And you don't have to be a rocket scientist to see that "one of these things is not like the other," absolutely applies to this scenario.
********* 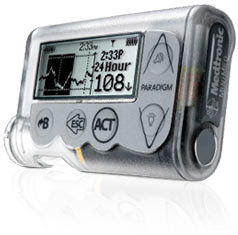 The above is an insulin pump is called the Medronic Paradigm Revel.
It acts as 24X7 robot pancreas to people living with diabetes and it saves lives by feeding us insulin subcutaneously.
It sort of resembles a beeper, circa 1990 (as do most insulin pumps,) and I'm OK with that.
It is powered by batteries and brain power.
It delivers us insulin.
We need insulin to live.
********* 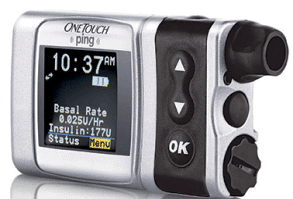 This is Animas OneTouch Ping Insulin Pump and it saves lives.
It spends it's entire life acting as an electronic pancreas that a person with diabetes wears clipped to their person 24X7.
And it also looks a bit like beeper.
But once again, I'm OK with people thinking it's a beeper/I'm a surgeon thing. And if I get Doctors parking privileges, even better!
********* 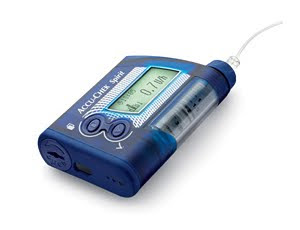 This is an Accu-Chek Spirit Insulin Pump.
And not to sound like a broken record, but it is a battery operated pancreas; it saves lives.
It transfers insulin from it's reservoir subcutaneously through an infusion set site to a person with diabetes - And gives them what those of us with "the betes" call "the elixir of life," a.k.a., INSULIN.
Hence the reason it is called an insulin pump.
And once again, it is beeper like.
********* 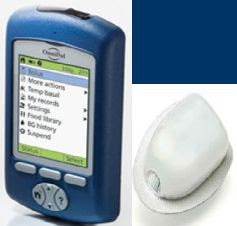 Believe it or not, this above duo also acts as a life saving insulin pump/automaton like pancreas.
It is called the Omnipod.
And yes, it looks like a pod and has it's own PDM.
There is no tubing attached and it's more circular in shape than the other pumps.
With that being said, it still doesn't look like a gun.
********* 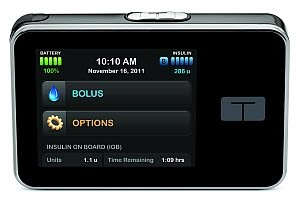 The above is not a picture of an iPhone and you cannot download your itunes library to it.
It is what those of us in the diabetes world call the Tandem Diabetes Care t:slim Insulin Pump.
It has a touch screen and as of this today, it's not out on the market, yet.
When it finally does hit the market, it will take it's place in the motion control pancreas world and save lives.
And finally.........
********* 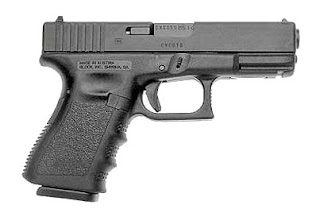 This is 9m.m. Glock: IT IS A HANDGUN.
It eats bullets, not batteries, and in no way can it deliver insulin to you, or for you.
And it is very, very dangerous.
You actually have to have a license to carry gun- And I'm not just talking about a Glock,(now I'm just going to keep saying GLOCK for continuity purposes. Plus, now I can't just can't stop saying GLOCK,) I'm talking about all guns.
And even with a license, you still can't bring a gun on your physical person @ the airport, Glock or not.
Ironically, a few celebrities and the occasional Texan have tried, but even they get it trouble for doing that - Go ahead, GOOGLE it.
And speaking of Google, when you Google the terms: "Handgun for women, or gun that women prefer, or women and guns," just for shits and giggles, The 9m.m. Glock is one of the guns that comes up over and over, which is why I'm using it as an example.
Now I'm no expert on guns, but the 9m.m. Glock looks like all the other handguns on the Google, and once again not one of those guns looks like an insulin pump!
And just so we're clear, in no way does the 9.m.m. Glock, or any other handgun resemble an insulin pump, beeper, pod, PDM or iPhone.
They resemble GUNS.
And guess what a gun look like On TSA Body Scanners??
A FREAKING GUN.
Seriously, TSA, how the f^ck can you confuse an insulin pump with a gun?
And just as importantly, why is OK that you you're employees mistake insulin pumps for guns, view cupcakes as contraband, steel insulin from pregnant ladies, give the elderly full cavity body searches, profile people because they look different and bust colostomy bags like water balloons?
And why are we the ones treated like criminals when you do?
Posted by k2 at 8:49 AM

You can always make me laugh. :)

IMHO, the TSA has some training issues, and part of it is because of the flunkies they have working for the agency. Seriously, many of the TSA employees I've encountered weren't qualified to be a burger flipper at McD's, yet they are working to ensure we're safe?!

I laughed when I read this, but unfortunately it outlines some very serious issues, and I will continue not to travel via airline until it is addressed. I recently learned from a coworker - the TSA confiscated an asthma inhaler from her 12 yo niece without even informing her parents. That child was so intimidated that she didn't say anything until they reached their destination. Really?? They had the gall to take medicine from a child, which could have caused harm or even death. Really!!!

Seriously TSA folks, get your act together re training and appropriate handling of those with medical issues, prescriptions, or devices of any kind. If you can't understand it, don't know what it is, ask before you act or especially, before you touch... anything.

Wow, getting ever more ridiculous.

Kelly, could you please help spread the word that the whole-body imaging machines at the airport are a form of X-ray. Therefore, insulin pump users need to either disconnect or ask for another form of security scan as x-ray can damage insulin pumps.

TSA officers aren't all trained on this and tried to get me to go through the whole-body imaging machine with my insulin pump on. I had to explain several times that my insulin pump would be damaged by x-ray.

I'm a type 2. When I travel I carry extra insulin pens with me, you know just in case.
Well I had about 6 pens with me, and the TSA said, oh you should have had those scanned separately. And I'm like "really".
Plus I have artificial left knee, due to replacement. I always inform them of this and always get patted down. I find it just easier.
goddess help me if I ever get a insulin pump!

There is actually a member of the diabetes online community who works for the TSA and she wrote a post about this situation. It is interesting to get the perspective of both sides.