My Experience With The OneTouch VerioSync.

Full disclosure, I was given the Lifescan ONETouch VerioSync and test strips to review free of charge.
With that being said, all thoughts on the product & the app are mine.
####

The day before Thanksgiving a LifeScan ONETouch VerioSync was delivered to my door.

I charged the meter & downloaded the free app to my iPad, but since I was going away for the four day weekend and staying at a friend’s whose amazing dog Misty chews on everything including cell phones,  I decided to start using the meter when I got back home.

Later the following week when I initially tried syncing my VerioSync & iPad, I experienced "communication" issues syncing up, so I called Customer Service number and they were wonderful.
The first CS person I spoke with was very professional, she took down my info and connected me to a VerioSync Specialist who walked me through the set up.
And of course my meter and iPad immediately synced no problem the minute I had CS on the line.
But I’m really glad I experienced VerioSync CS department because it was a pleasant & quick experience & they were really great!!

Things I loved about the ONETouch VerioSync:
*Only a minuscule drop of blood is needed - that works for me.
*I didn’t have to write anything down - Again that works for me and the sync up was pretty much automatic - I was able to add meal, insulin and other important notes.
*The lancets that came with the VerioSync were micro fine - I barely felt them.
*Speaking of syncing, the Verio meter synced with my iPad, but didn’t suck the life juice out of said iPad.
*Visually, I like that the charts alerted me to certain patterns, for instance, the High Pattern Graph feature alerted me to the fact that for 3 days in a row my blood sugars ran higher than normal after dinner.  I’m not sure that would have registered if I didn’t see that in chart form.
*Built in logbook - LOVE IT
*Notes, as in there's a feature that lets you add lots of notes, which I really like because I was being able to write info down helps me keep track of the hows and the whys regarding my glucose numbers.
*Sharing Data: The app has a feature that allows you to share your 14 day glucose data via text or email - I like that.
I haven't tried it, but I like that the option is there and ready if I do. 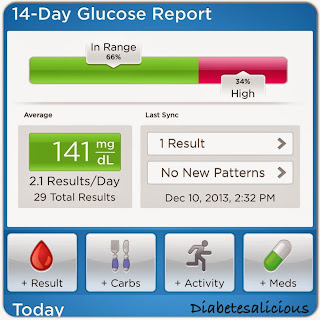 Things I had to get used to:
*Charging my glucose meter. Granted I didn’t have to charge it once after the initial sync set up, but what if I was out and my meter needed charging and didn’t have my charger with me?
*Ok, to answer my own question, I would most likely become very aware of having to charge my meter just like I’m very aware about charging my iPhone and my iPad.

*Make sure you have the app open before you sync your results to ensure that your results will sync with the app- It took me a few days to get used to that, but once I did it was second nature.

*There was one time when I powered down my iPad to conserve the battery and when I rebooted it, I didn’t realize that I had to re-sync the meter. I was at work and I ended up manually inputting my numbers, which I was OK with.

Things I wasn’t a fan of:
*You can’t go back and manually input glucose numbers at a later time - I didn’t like that feature. What if I wasn’t in the same room as my iPhone or iPad or forgot to take them out with me. Not being able to count those numbers in my blood sugar daily average annoys me.
*I like that the app lets me program whether my blood sugar it’s before or after a meal, but I wish the LogBook feature would allow me an easy option to punch in both the glucose time setting and whether the blood sugar was for a meal (breakfast, lunch, dinner, snack, etc) or not.
WHY?  Because I don’t eat at the same time everyday and some days I test more than others. Sometimes I test 3 times between lunch and dinner alone.
I know that you can go in and manually input time settings, because I saw that feature when I wasn’t looking for it.
But when I specifically looked for that feature to actually use it,  I couldn't  locate it and gave up trying to find it.

Sometimes there were 3 blood sugars in a row around dinner in my log book, when in actuality it was more like 2 late afternoon blood sugar checks & then the dinner blood sugar.

*** The folks at VerioSync reached out and explained that in order to change the time settings in the app's Logbook, I needed to go to the bottom of the app and click on “More.” Then click on “About Me,” scroll down the screen and look for the section called “Time of Day for Logbook,” which is where changes to the logbook time settings on that screen.

*When I first started using the VerioSync I compared glucose numbers with my ONETOUCH Ultra Mini and the ONETOUCH VerioSync glucose numbers ran between 15 to 30 points higher about 50% of the time - that was really frustrating. #StripSafely

After a few days of continually comparing 2 glucose meter readings, I stopped comparing meters and stuck with the VerioSync numbers because:
1. i wanted to base my readings on the VerioSync
2. I was starting to go slightly batty trying to do the bolus math.

Bottom Line:
I really like the ONETouch VerioSync and I especially like it in conjunction with my iPad - I liked the visuals and I liked that I could log, take notes, watch trends and have the ability to text or email the data.
Would I like to see the kinks I mentioned worked out?  Indeed I would - And I believe they will be, because apps are continually being updated - At this very moment I have 26 different notices for app updates on and for my iPad right now!
Diabetes technologies in all dimensions are keys to our good health - Keep them coming!!

Thanks for the recap-- I like the fact that you can e-mail your information using the app. My endo would like that. I like the graphics too, but I'm easily seduced by a pretty picture.

I think you're right... apps are constantly updated. And if they stop updating them, it's probably because they're working on a new app. Thanks!