D-Meet Up With A Nutella Spin~ 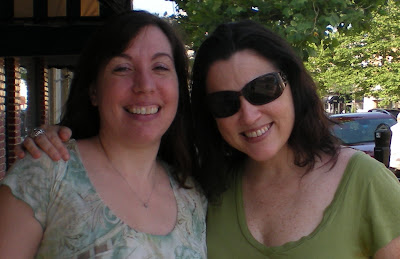 Actual footage of two Diazons strolling down the avenue.
It's been a busy month with traveling and I'm a bit behind with some posts, including this one, which is about a d-meet up with my friend and yours, the spectacular Karen from Bitter-Sweet Diabetes.
Karen and I have met before and keep in touch via the blogosphere, emails, the twitterverse,and that time sucking site known as Face Book.
A few weeks prior to the d-meet, we'd exchanged a series of emails hammering the who, what, where, and when of the d-meet up.
Long story short, Karen and her husband Pete were going to Cape May, NJ to celebrate their anniversary. My home town beach of Margate, NJ was 40 miles away- I'm all about the beach on the weekend so we decided to meet in the middle at a cute little crape place in Ocean City, NJ & have a late lunch.
I LOVE Karen! She's bright, funny, positive, can knit like nobody's business and girlfriend is a MAJOR part of the Diabetes on-line community. She's the brains behind D Blog Week and one of the great brains behind D-Feast Friday. Chicklet is all that and a bag of potato chips!
And guess what? Karen's husband Pete is awesome! He's what we Jersey folks call "good people" and he totally rocks!
We decided to have lunchy type cheese and veggie crapes and the 3 of us talked for hours. And just so we wouldn't tie up our table from other paying/dining customers, we decided that it would best for all parties involved to order a plate of Nutella crapes with three forks. All I can say about the Nutella filled crapes: O. M. G!!! Seriously, they were totally bolus worthy! 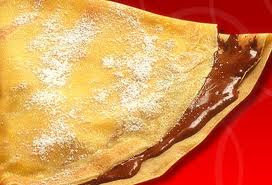 Re-enactment crape.
This is not a pic of the actual Nutella Crapes we consumed - I'm sad to say that no pictures survived the feeding frenzy.
We spent the next few hours walking around Ocean City and talking about everything under the sun. When it was finally time for them to leave (who am I to keep them from celebrating their anniversary?) I was sad to see them go.
D-meet ups are amazing on every level imaginable, as are Karen and Pete.
Posted by k2 at 1:28 PM

Two of my favorite people AND Nutella for breakfast... I think that's my idea of a perfect day. :)

(Yeah, that's all I can come up with today.)

Wish I had been there!!!

I love Karen & Pete, and I'm so glad you all got to hang out for an afternoon.

Sweet! (lol) I read about your meet up on Karen's blog too, and I was so jealous about the crepes! I want one!!!!!

That would have been an awesome meet up. I really love both Karen and Pete! They are great people with big hearts.

D-Meetups rock, and it sounds like this one was no exception to the rule! Great to hear you and Karen and her husband had a great time.

What a great meet-up! And such a great place to do it in, you know that!

Oh my goodness, I'm so behind on my blog reading that I'm just now getting to your sweet post. We had THE BEST time with you - we were so very glad that your city turned off the power so you had to have the whole afternoon off. ;)

I am concerned, however, that you are greatly exaggerating your description of me. Pete, however, does totally rock - I'm a very lucky girl. Oh, and those Nutella crepes totally rocked too!!

Love you, friend. And next time, we won't let so much time go by between visits.