Diabetesalicious-Lite Is Brought To You By: Infusion Site Awareness, Hurricane Earl, The FDA/Menus/ Carb Counts, Barkley The Dog, & Bitch Pens....

This Week's edition of Diabetesalicious-Lite is brought to you by & Infusion Site Awareness, Hurricane Earl, The FDA & carb counts,Barkley The Dog and Bitch Pens....

A few weeks back I received a packet from Roche regarding Infusion Site Awareness week, which is (was) August 30th through September 5th. Yes, I know ,we are half way through it, and it's my fault that I'm putting it out late and I apologize.
Infusion Set Awareness Week is pretty cool, and as far as I'm concerned, every week should be infusion set awareness week- especially if cool temporary tattoos are involved!

Basically, the folks at Roche ( Full disclosure, I sit on their Patient Advisory Board) wanted to stress the importance of not only changing your insulin pump infusion set & rotating your infusion set sites to prevent infection, scare tissue (dead spots,) tissue damage, and lipohypertrophy - swelling caused by an increased of fat cells at the infusion site. Not only does it cause lumps, but poor absorption.
OK, I'll admit it, I'm not always great when it comes to changing my site, but like everything else diabetes related, I'm working on it. Roche sent me a bunch of information regarding infusion site awareness as well as something kind of cool: Temporary tattoos for infusion sites, with the hope that it will promote PWDs to change and rotate their sites every 2 or 3 days.

Now if truth be told, I always wanted a tattoo, but was to chicken to actually get one. So I was very excited to try the temporary infusion set tattoos. AndI love it! It didn't hurt, took all of 30 seconds to transfer to my site, and lets face it - It looks damn cool! I can't wait to change my set and try another one on for size!
They work with all pump infusion sets, and if you happen to wear a pod, me thinks you can transfer the temporary tattoo to your pod! 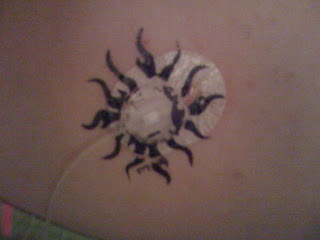 Yours truly rocking the temporary infusion set tattoo and breaking my cardinal rule of showing off my stomach! 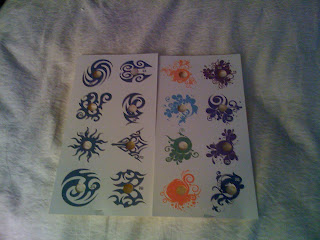 Interested in learning more about infusion set awareness? Of course you are! Here's the link: http://www.accu-chekinsulinpumps.com/en_US/act/en_US/microsites/infusionsitemanagement/index.html

If you'd like to receive some temporary infusion set tattoos, email me & I'll send you some. FYI, I only have a limited number, so email me sooner rather than later~

It's Hurricane Season for those of us who live on the East Coast, and we are prepping for the latest Hurricane/Tropical Storm called Earl. Hopefully Earl will bring us nothing but rain and a few awe inspiring waves. Last week was the 5 year anniversary of Katrina, and seeing the footage replayed over and over on the news, I was again reminded of the devastation that Mother Nature can cause. All of us need to be prepared.

dLife has a great article about Diabetes And Weather, and how we need to create an Emergency Kit in order to be prepared. Click HERE and read it.

Bennet over at YDMV sent me a link to his post regarding the FDA hearing regarding nutritional information on menus, including CARB COUNTS for all entrees, appetisers, & desserts. Obviously, as PWDS we need that info! We have until September 7th to let the FDA know how we feel. In order to do that , click HERE & tell the FDA why carb counts on menus are crucial to those of us living with diabetes!

This weeks strange but fabulous facts:

If you pause "Saturday Night Fever" at the "How Deep Is Your Love" rehearsal scene, you will see the camera crew reflected in the dance hall mirror.

The bubbles in Guinness Beer sink to the bottom rather than float to the top like all other beers. No one knows why.

In the 1940's, the Bich pen was changed to Bic for fear that Americans would pronounce it 'Bitch.' Personally, I like Bitch Pen better ;)

And now you know~

Email ThisBlogThis!Share to TwitterShare to FacebookShare to Pinterest
Labels: Diabetesalicious-Lite

I like Bitch Pen too. Why do people ask for an ink pen, when all pens have ink? If they want to be specific, just as for Ballpoint, Felt tip, Uniball, Marker, etc.

WOW those are so cool!!! Are those always available or only during Infusion Site Awareness? I think Tristan would get a kick out of them.... not only that, it may make site changing less of a fight if he gets to pick a tattoo to go with it.... alright I'm on the hunt now! :) Thanks for posting that! :)

I shall now call them Bitch pens.
Have a good weekend Kel - enjoy Earl! (oooohhh that sounds so baaadddd)

And on the tattoos, I thought you were supposed to put them on after you take your set off, and then not use that spot until the tattoo was gone? I don't know for sure though - honestly haven't had time to dig into the box yet... (shame on me).

I will now refer to every pen I have as a bitch pen, when appropriate! LOL

Binky-
Have no idea why people ask for ink pens, because like you, I'm under the impression that all pens have ink.
I like "Bitch Pens" 2!

Rachel -
Yes indeed they are cool! I think Tristan will LOVE wearing them. If you'd like me to send you a sheet, email me your address!

Penny -
ME 2!
I will enjoy Earl, but will be even happier when he leaves town!

Scottie J-
Bitch Pen sounds better!
As far as the tatts, you place the tattoo directly over your cannula insertion site. I read the directions!

Awesome post! Love the tatts. Those are WAY COOL :)

Did I miss something....was there another way to pronounce it?

Can I just get the tat. I swear I will wear it with pride and I can even create an Infusion site with the bitch pen to cover lol

I like the tats - sexy and cool. I am going to try to get some samples too - wish they sold 'em directly.