The world is smaller than we think & hometowns are larger than we ever imagined. D Meet-Up

The summer is over and the first day of Fall (September 22nd) is just around the corner.
This past Summer was filled with travel (both work and play,) and lots of D Meet-Ups! So many, that it was hard to keep track! Yours truly dropped the ball on writing about her last diabetes meetup, and is now "writing" that wrong!
As many of you know, I grew up up small South Jersey beach town where almost everyone knew everyone else, or so I thought. But that's not really the case. There were several grade schools and two high schools. While the island is small, the education options are not. So in real life, not everyone knows one another - but you can be damn sure everyone has at least one mutual friend!
Growing up, I knew one kid in my hometown with diabetes. He was 3 years older and we hung out a bit when we were in grade school, but after that, we lost touch. For the most part, I grew up thinking I was the only D chick in town.
Years later, i'd find out I wasn't.
Cut to present day. I'm well past school age and life has taken me many places. I've met lots of interesting people, and I'm still expanding my horizons so to speak.
My friend Lori A, who married my best friend's brother, and who has became my good friend in her own right, and who lives down the beach in the next town over from where I grew up,( yes, it's confusing) called me one day.
Lori A: Hey Kel, do you know a diabetes blogger named Ophir?
Me: Kind of sounds familiar, why?
Lori A: Well, I had a beach house with this girl named Ophir years ago. We've kept in touch and it turns out, she started blog called "The Conscious Diabetic," and she grew up in Margate.
Me: I know that blog - Your kidding me!
Lori A: No, I'm not. She's our age and she knows who you are because of your blog.
Me: What middle School did she go to?
Lori A: Hebrew Academy, and then I think she went to public high school.
Me: Oh, that's why I don't know her, I went public grade school and then I was forced to go to Catholic High School.
So long story short, Ophir and I became facebook friends and communicated via email.
At the start of a long weekend this past July, and after dropping Lori at her house after a dinner with friends, my phone started ringing the second I got out of my car.
Lori: Kelly, Ophir just stopped over - come on over and meet her.
So I did, and it was fantastical. We hugged one another, found out who our mutual friends were growing up, and shared our diabetes experiences. It was magic!
Ophir is smart, intelligent, and pretty damn awesome! When we finally said our goodbyes it was well after midnight. As I started driving, I kept thinking how great it would have been if we'd met when we were little girls.
A few weeks later, I asked Ophir to write a guest post. She said yes and wrote: "Thriving With Diabetes." It wonderful!
Bottom line, the world is smaller than we think, and hometowns are larger than we ever imagined.
With the advent of the Internet, Dblogville, & a friend named Lori A, two home girls with broken pancreases finally got to meet and become friends, years after growing up in the same small town. 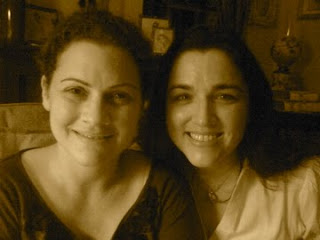 Two hometown Diazons finally meet!
Photo courtesy of my iPhone
Posted by k2 at 10:52 AM

Email ThisBlogThis!Share to TwitterShare to FacebookShare to Pinterest
Labels: DMeet-up

So awesome and what a great picture! Very cool stuff indeed.

I love small town stuff! Glad this doesn't happen to just us upstaters. :)

So awesome and so wonderful you two got back together! Yeah for D-meetups!

Very Cool. Love how life does things like that.

It was pretty awesome to meet you too! I'd love to do meet up again! It would have been great to have known each other when we were younger. Times were different, and oh, they have changed!!!!! Thank you, Lori A.

That is freak'n fan-tabulous! What a small world! Love it.

Two awesome women. I hope to meet you both.