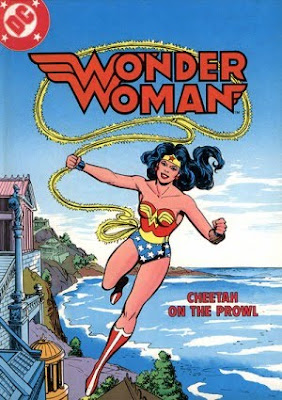 So a few weeks ago on FaceBook, almost everyone I know was replacing their profile pic with a cartoon character from their childhood – and since I watched more than my share of cartoons as a kid (and continue to do so as an adult) I picked Wonder Woman from The Super Friends/Justice League Cartoons of the 70’s & 80’s.

At first I was embarrassed, but I got over that quick when I realized how it would add to my Wonder Woman repertoire. And I was pissed when my mother told me that under no circumstances was I allowed to wear them as outer clothes when I was playing Super Heroes with the other children in the neighborhood!

Wonder Woman was cool, she was brunette and had awesome super powers and accessories, and was a true Amazon/Glamazon who kicked major ass!

Not to mention the fact she was continually surrounded by hot guys who may or may not have been “a friend of Dorothy.” So yeah, I could relate.

Cut to a week ago, my friend and I were getting ready to go to a Christmas party when she commented on my cartoon of choice profile pic.

Friend: Wonder Woman? I don’t know Kel, you have to be pretty awesome to live up to the standards set by Wonder Woman – Or any super hero for that matter!

Me: I’m not worried about that- I pretty much kick ass. Actually, it was a toss-up between Wonder Woman & Wolverina, but since Wolverina wasn’t a cartoon of our youth, (but boy does she kick ass and look smoking hot while doing it!) I went with Wonder Woman.

Friend: Oh, you kick ass Kel! I’m just joking with you – I love that you used that pic!

And I never doubted for a second that she wasn't joking, because she's one of my best friends and biggest fans! And I know she knows all the work that being me involves.

But for some reason that comment of having to be awesome to call yourself Wonder Woman or any super Shero/ Hero really stuck with me.

And I think the reason it stuck with me is because every single PWD is a Super Hero because our lives as PWDs require us to be.

We don’t have any choice but to develop our diabetes powers and become 21st Century Diabetes Super Sheroes & Heroes.

Armed with our high tech (and not so high tech) diabetes arsenal including, bur not limited to; meters, insulin, pumps, cgm’s, glucotabs hidden in the most unexpected of places on our person, educating others and humor that many would say boarders on snarkiness and a few have said is downright bitchy & inappropriate!

Our high tech methods of communications in the form of the Diabetes On-line Community, phone apps, D – Super Friends Social networks and our lightening speed on the twitter, blogs, texts, and the email, we get the diabetes news and information out to others and learn more than a thing or two in the process.

Diabetes Super Heroes and Sheroes continue their daily battles with misbehaving blood sugars - both low and high, unexpected doorknobs peeking around every corner and diabetes myth busting at every turn! We continually deal with the stress of waiting for test results, and daily encounters from every division of the Diabetes Police, including; The Know it All Company, The Homeopathic Crew, The Insurance Company Brigade, and the Snake Oil Squadron – just to name a few.

And even when we feel diabetes burn out inching it’s way into our diabetes liar, we pull ourselves up by our bootstraps, dust ourselves off, and continue with our diabetes crusade every single day. We can’t help but be Super Sheroes and Heroes!

We are The League Of Extraordinary People With Diabetes and cape or not, we are super in every way!

But I have to admit; I really dig the Super Shero accessories!

Sidebar: I know that the idea of PWDS isn't a new one, we've all chatted, tweeted & written about it before - and it was mentioned again in #dsma last nite! Chris over at type1tidbits.com even has a whole Diabetes Super Heroes Blog Roll, but for some reason, the link isn't working.

Can I just mention that I'm loving the word "shero"? Fabulous!

Can Ninjas be heroes?

LOL - LOVE our "enemy" list (The Know it All Company, The Homeopathic Crew, The Insurance Company Brigade, and the Snake Oil Squadron) How true! That line just made my day! :)

Oh, Wonder Woman, (s)hero of my youth. I wanted to dress as her for Halloween one year, but my mom "couldn't find the costume". I'm guessing now that WW was a little too sexy of an outfit for a grade-schooler. Ha!

You are all Superheros indeed!!!

PWD are super super heros ! and most PWOD (ppl without diabetes) don't have a clue.

Sometimes I just feel like a very sick person. Other days, I look back at those sick days and see my inner SHero. It doesn't hurt to have the DOC and ACT1 as my Diabetes League. WW was always my favorite. I was more into the show than the cartoon. My mom said I used to pretend to be WW and Dorthy Hamill lol. Meanwhile in real life I have trouble getting out of bed and I have never ice skated so I guess I had a good imagination. Thanks for this post it really made me smile :)

I had Wonder Woman Under-roos. I couldn't wear mine outside either.
:(

They were totally AWESOME!!!

Kelly you are my super duper shero in more ways than one...lets keep up fighting these forces of evil..

about 3 months ago I was working with JDRF on fliming a commerical for the Walk.
part of my job was that we had a person dress up as the "diabetes man"
the diabetes man and myself ran up the steps of the art art museum in Philadelphia.
I ran up the steps and beat Diabetes.
that day I was my own super woman

Love the post..Wonder Woman has been my dream Hero since I was a kid..nice!

Wonder Woman and Catgirl - the only two femme heroines I remember from my childhood.
Ah - the memories........